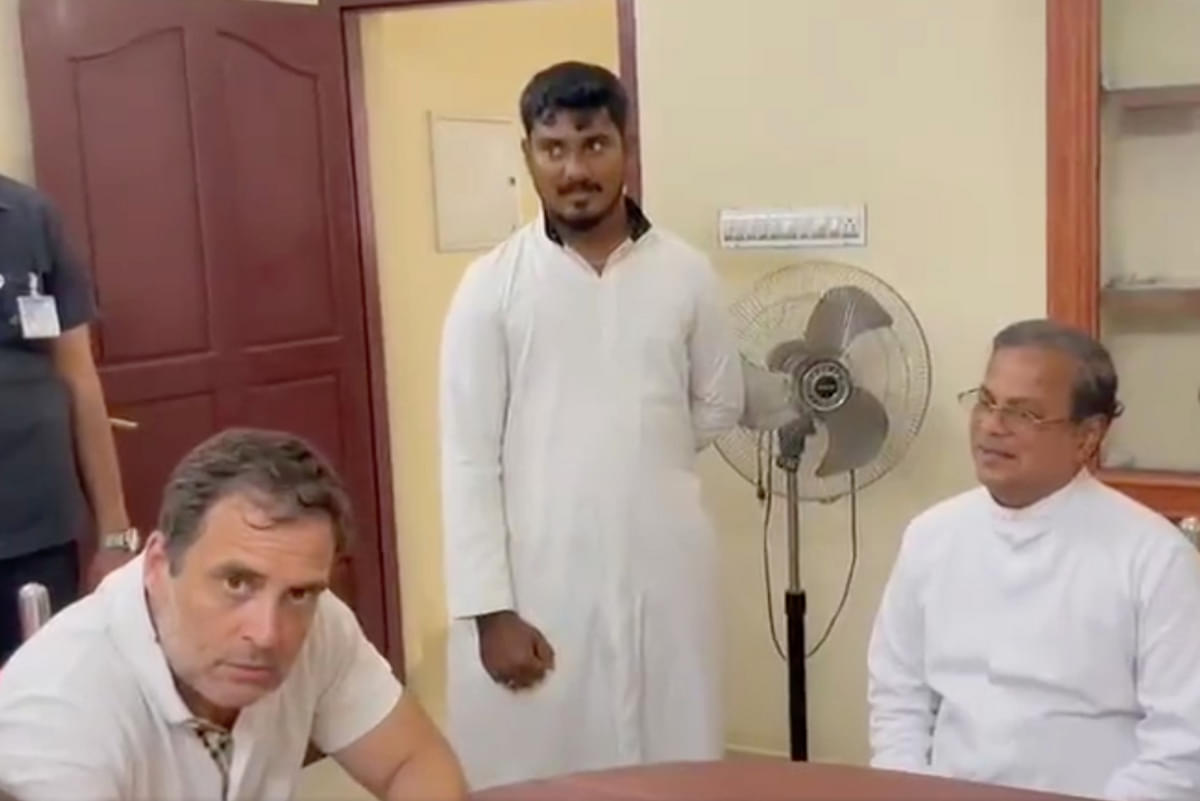 In the videos going viral on social media since morning, Rahul Gandhi is seen discussing the nature of God—whether Jesus is the God or a form of God—with a Catholic priest.

The tweets suggest that in his 'Bharat Jodo Yatra' of 60 state-of-the-art luxury caravans, Rahul stopped and held a long theological discussion with George Ponnaiah, the Catholic priest who is out on bail after he abused Hindu culture and Bharat Mata.

Jesus Christ is the god, only real god, not like Sakthi & other Hindu gods - preaches George ponnaiya to Rahul Gandhi.

Reverend George Ponniah, the priest who talked about Hindu Deities in a derogatory manner, is seen explaining the concept of Catholic Trinity to Rahul and then telling him that Jesus was not like Shakti or other Gods, but the God, etc.

Rahul Gandhi, with his characteristic vacuous expression, is seen nodding his head to the exclusivist-supremacist theology that Ponniah explains.

The content of this theological discussion/indoctrination is relatively immaterial when compared to the signal this video sends to the already communally sensitive Kanyakumari district.

This suggests that the Congress under the Gandhis is putting its weight behind the most fundamentalist strand of the Catholic Church.

When the abusive video of Rev. George Ponniah came to the fore last year, the Church was quick to do damage-control by throwing him under the bus and portraying him as a kind of a fringe element.

The current video, and if the Padre there is indeed George Ponnaiah, sends two strong messages - one from the Catholic Church and the other from the Congress.

The Catholic Church sends the message that it considers Rev. George Ponnaiah important enough in its political scheme of things; so much so that it allowed this priest, out on bail for hate speech, to lead the interaction with Rahul Gandhi, who is on a political march.

It also sends the message to the Hindus of the district that it is strong institutionally and politically and that it does not really care how Hindus may perceive this meeting.

The Congress, on the other hand, sends a message that it supports the political vision of the Catholic Church and the views of George Ponnaiah.

It shows its solidarity with the Church in a district where the Hindus are vulnerable.

If one cares to look at Rahul Gandhi's body language in the video, he looks very much at home with a Christian audience, in a church and in the company of Christian clergy.

At the same time, he looks lost and uncomfortable in Hindu places of worship. Even in this Yatra, when he visited the Vivekananda rock memorial, one could see the way he came out of the Holy Mother shrine and had to be prompted to do even circumambulation of the statue of Swami Vivekananda.

What BJP under Narendra Modi is to Hindu consolidation, the Congress under Sonia-Rahul is to forces of theo-colonialism; particularly to the hateful and powerful sections of the Catholic Church.

This blatant double endorsement of a hate speech accused by both the Catholic Church and the Congress should make Hindus in INC and throughout India realise this truth before it is too late.

Also Read—Theology of demagoguery: Why Tamil pastor George Ponnaiah’s hate speech should frighten us all