BHU Controversy: The Institutionalised Bigotry Of India’s Minority Education Institutions They Don’t Want To Talk About 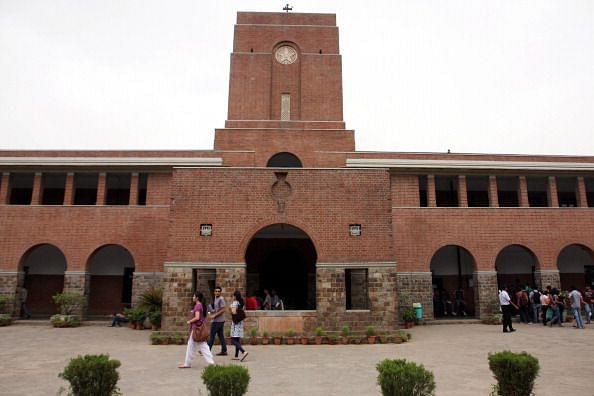 The controversy over the appointment of a Muslim professor in the department of literature at the Sanskrit Vidya Dharma Vijnan at the Banaras Hindu University (BHU) has raised hackles in mainstream media.

The opinion-makers in the left ecosystem leave no opportunity to bash the other side for the slightest transgressions in public discourse but remain silent at the institutionalised bigotry that has become the mainstay of lawmaking in the country.

Looking at the angry reactions and admonitions that they have heaped on the protesting BHU students, one might be mistaken into thinking that these public figures are genuinely worried about the communalisation of university spaces. Certainly not.

If that was the case they would also have talked about St Stephen’s College and the Christian Medical College of Vellore.

And that’s not the only problematic part.

The constitution of St Stephen’s College states that the Supreme Council of the college, which is in control of moral and religious education, will have its members only from the Church.

Why does the same ilk. which is agitated over BHU students for demanding that their religious education be in control of practicising Hindus, stay silent on the bigotry of institutions like St Stephen's College?

Why then are the elite alumni of this institution — like Shashi Tharoor and other assorted ‘liberals’ — criticising BHU students for demanding the exact same system?

Why don’t they raise their fingers with equal fervour at the Jesus and Mary College, which is openly advertising that it wishes to hire a Principal and only Christians with a Baptism certificate from the Church may apply?

Today, there are hundreds of colleges — all funded with public money — that reserve seats for students belonging to a particular religion. These colleges with the ‘minority’ tag do not implement the quota for Scheduled Castes/Tribes/Other Backward Classes (OBCs) that is mandated by the Constitution.

This is because Sonia Gandhi’s backroom-operated government in 2006 amended the Constitution via the 93rd constitutional amendment to exempt minority colleges and universities from that requirement.

And these folks, who are now pretending to be outraged by the BHU event, didn’t speak out then.

Every year, lakhs of students across the country from economically poor backgrounds and disadvantaged sections get admission under the Right to Education Act in private schools.

But thanks to the 93rd constitutional amendment, all minority-run institutions are exempt from this social responsibility too. Again, our left intellectuals refuse to utter a word at this sectarian monstrosity.

These same people didn’t raise their voice when the Congress government in 2004 constituted a body called the National Commission of Minority Education Institutions (NCMEI), which doesn’t allow a Hindu to be its member.

The minority members of this body distribute minority certificates to their brethren every year like candy on Halloween, exempting more and more institutions from laws like the RTE or the SC/ST/OBC quota mandate.

What’s more, even normal state regulations that apply to Hindu-run institutions aren’t applied to these minority fiefdoms. This institutionalised bigotry is giving an upper hand to the latter in driving out the former from the market.

And what is the basis of an institution being labelled as a minority one?

It’s not because they are running these institutions for preserving their unique culture, language or script. No. The only basis is if you are a non-Hindu, you get these special goodies. You get to be outside the ambit of the law only on one criterion: the religion of the members of the management.

So if Amar, Akbar, and Anthony have opened educational institutions in a certain locality and if they are teaching the exact same subjects with the exact same syllabus, then they are treated differently by the law. Why?

Because Amar is a Hindu and Akbar and Anthony belong to minority religions, designated so by the Indian government in 1992 when it set up the National Commission for Minorities (NCM).

There was no outrage from the usual suspects when the Congress government in 2007 started doling out scholarships based on religion, which was based on a communally-spirited and flawed Sachar Committee report.

Public money worth thousands of crores is being doled out every year based on the religion of children. Could there be a bigger case for calling out the bigotry of the Indian state? But here the cat gets the tongue of the otherwise loquaciously eloquent secularists.

Why is no one from the left-liberal clique calling out the communalism of institutions when the government allocates anganwadi centres, government schools and Industrial Training Institutes based, not on necessity, but on religion?

Areas with a substantial population of minority communities receive a certain quota of funds allocated for general development projects but raise a question about this and one hears only deafening silence from this partisan group of commentators.

And all this is just the discrimination sponsored by the central government alone. We haven’t even scratched the surface of the sectarianism that is enshrined in the public policies at the state level, which is an even bigger abomination.