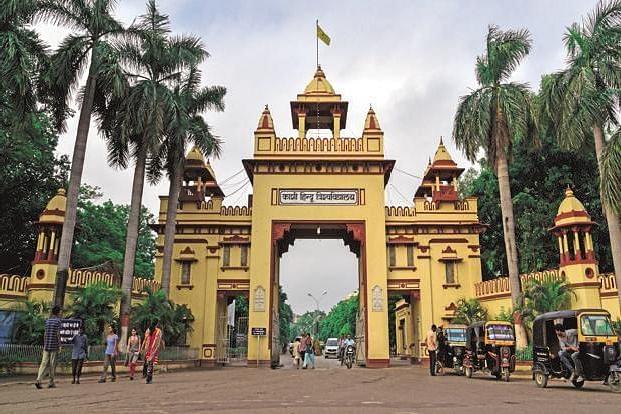 Dr Firoz Khan was the only Muslim student in his batch when he opted Sanskrit for higher studies. Last year, he completed his PhD from Rashtriya Sanskrit Sansthan where he also taught Sanskrit as a guest faculty. He hails from Jaipur’s Bagru village, famous for its artisans who excel in block printing on fabrics.

Khan’s younger brother has also studied Sanskrit. So did his faither Ramjan Khan who would sing bhajans to raise money for gaushalas. His grandfather did the same.

It’s really a matter of shame then that Dr Khan, who comes from such a family which is rooted in Indian culture and tradition and has made its livelihood dependent on this land’s civilisational ethos, is being put in the dock by entitled juveniles at the Banaras Hindu University (BHU) who clearly have very high opinion of themselves and know better than the administration whether someone is qualified to teach them or not.

They have been staging protests against Dr Khan since he was appointed as an assistant professor on 5 November.

Out of 30 people, 10 were shortlisted for interview. Out of those 10, Dr Khan came out on top and despite the allegations by students that he was not an eligible candidate, there is no evidence to suggest that this charge is true. Absence of evidence is not evidence of absence but why would a panel full of Hindus recommend a Muslim over so many Hindu candidates if he isn’t qualified?

Many other fallacious arguments have been furthered to give intellectual cover to this clear case of bigotry.

Chakramani Ojha, who is leading the protests, told OpIndia that, “‘Sanskrit Vidya Dharma Vigyan’ is the full name of the stream. There are two parts to it. First is “Sanskrit Vidya” and other is “Dharma Vigyan” (theology). While it’s true that Sanskrit can be taught by any person with the necessary skill set, it will be too much to expect that Hindu theology could ever be taught by a person of a different religion who doesn’t have any faith in the scriptures he is supposed to teach.”

There are many problems with this statement. For starters, Dr Khan has not been appointed to teach the scriptures. There are eight departments in the Faculty of Sanskrit Dharma Vidya Vijnan (SDVV) — Ved, Vyakaran (grammar), Sahitya (literature), Jyotish (astrology) , Vaidik Darshan (vedic philosophy), Dharmagam, Dharmashastra and Mimansa, Jain-Bauddha Darshan.

Dr Khan will be joining the most secular of these departments. He will be teaching literature. Of course, it would be Sanskrit literature and many scriptures would be a part of the curriculum but its not theology per se.

Moreover, it is ridiculous to suggest that theology can’t be taught by non-believers be it Hindu, Islamic or Christian. Scholars across the world have been doing so for many centuries and will continue to uphold that tradition. Was Dr Bhimrao Ambedkar a scholar on Islamic theology? Was Dayanand Saraswati? Would we better off if those two had not written on Islam?

Will we be better off without foreign scholars like Koenraad Elst writing on ‘dharma wars’ or decolonising our Hindu minds? Let me dare say that we would be worse off even without Max Muellers, Sheldon Pollocks and Wendy Donigers of the world indulging in Indology.

These scholars may have many flaws and their worldview even after coming in contact with our scriptures may be skewed but their contribution in whetting the appetite of natives for better scholarship regarding dharma cannot be understated.

If only the practitioners and purists had the monopoly on discourse over Sanatan Dharma, it wouldn’t be sanatan and might have ossified centuries back consigned only to history textbooks and museums. It sustains because it sheds deadwood and transforms with time. It is dharma because it’s not stagnant and isn’t concerned more about who is saying it than what is being said.

We are not proselytising people. We don’t win converts by sword or by monies. What we do have is our heritage - our rituals, traditions and millennia worth of knowledge. These are our tools for harvesting minds, souls and hearts of ‘others’. Now, think of the potential debilitating effect the shenanigans of BHU students can have on non-Hindus. The day non-Hindus stop taking interest in Dharma and Sanskrit is the day we should seriously dread of. That’s why these misguided students can’t be allowed to succeed.

Of course it’s not difficult to find Hindu traditionalists on social media supporting BHU students. They might fancy themselves as dharma warriors or Hindutvawadis. They are neither. They can’t claim to be subscribing to either the Hindutva of Sangh or that of Veer Savarkar. Both are vastly different. RSS is more accommodative and inclusive but idealist in outlook perhaps due to compulsions of operating in a Nehruvian state. Savarkar’s brand of Hindutva is more rooted in reality, free from any compulsions of appeasing anyone.

Someone who subscribes to the latter can only celebrate and support Dr Khan and his ilk.

Just this year, President Ram Nath Kovind awarded Padma Shri to Mohammad Hanif Khan Shastri for literature and education. In 2014, Naheed Abidi, a Muslim woman, was bestowed with this honour in 2014. Such Muslim scholars are bring celebrated by this nation and rightly so. The mischief mongers also not lose sight of the fact that it’s the Hindu nationalist government at the Centre which is doing so.

Hindu nationalists don’t see any difference between Hindu and Indian nationalism. They should be leading in their felicitations of these fine brand ambassadors of Indic knowledge systems. Anyone who is siding with recalcitrant students on dharna cannot be a friend of Hindutva.

Another ridiculous stand that’s being erected in defence of protesting BHU students is that how can a Muslim who considers Hindu religion, Hindus, their scriptures or anything Hindu as haram teach students these subjects?

Imagine if such juvenile arguments were used to deny K K Muhammad to work in excavations at Shri Ram Janmabhoomi in Ayodhya or in restoration of Bateshwar temples? He is a Muslim.

How can he work on these projects which are obviously haram in Islam? How can we let A P J Abdul Kalam play veena or read Bhagawad Gita for they are kuffar in Islam?

Islam has already too many mullahs to issue fatwa against apostates. Hindu nationalists would do better to side with heretics rather than mullahs. If Muslims, no matter how small a section, want to de-Arabise and Indianise, how can any Hindu nationalist find fault with this? It’s a no brainer.

If Hindu rashtra is about forging a nation based on Hindu civilisational ethos, our age old cultural traditions and knowledge systems, the only logical way is to embrace, support and promote each and every individual who contributes towards that goal irrespective of their religion.

If in building Hindu rashtra, they are breaking the rules of their sects, they are being brave. Let the high priests of those sects speak up. The proponents of Hindu rashtra must stand shoulder to shoulder with these heretics who are choosing rashtra over religion. This is dharma. This is rashtrawad.