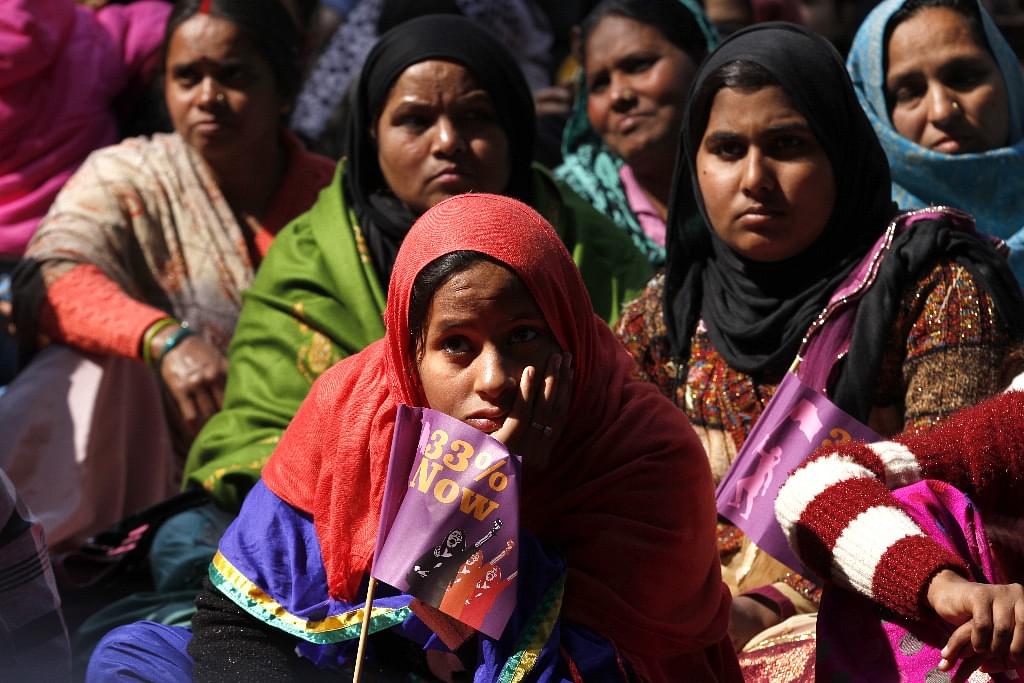 Women taking part in a public meeting organised by women’s groups as part of ‘33 per cent Now’. (Arun Sharma/Hindustan Times via GettyImages)

The Bharatiya Janata Party (BJP) is being too clever by half in tying the proposal to pass a bill to reserve 33 per cent of seats for women in Parliament and legislatures to Congress support for its own bill on criminalising triple talaq and banning nikah halala. This bargain is the sum and substance of a letter written by Law Minister Ravi Shankar Prasad to Rahul Gandhi.

It may seem like a clever political move to challenge the Congress to anger its own minority constituency by asking it to choose between the reservation bill and triple talaq, but it does not speak much for the BJP’s own commitment to giving women more say in law-making.

One backs the idea of reservations and quotas with hesitation. But if there is one area where quotas make sense in the foreseeable future, it is in giving more say to women in how this country is governed, and what kind of laws it should legislate. There is really no merit versus competency argument here to complicate the demand for reservations, for few male MPs are necessarily more competent than women to make laws. They can both be helped by specialists to navigate complicated legal and ethical issues. As a rough rule, bringing women’s issues to the fore, and obtaining their consent for laws in general, will make for more balanced laws. It will, at the very least, make law-making more gender-sensitive, which is the need of the hour.

It is possible that the BJP, which backed the Women’s Reservation Bill the last time it was introduced in the Rajya Sabha during United Progressive Alliance (UPA)-1, has now moved to a more ambivalent position, possibly because its core voter base has changed to Other Backward Class (OBC) in many states. The last time, those who were most opposed to quotas were the OBC parties, including the Samajwadi Party and the Rashtriya Janata Dal, apart from the Bahujan Samaj Party, which wanted a Scheduled Castes and Scheduled Tribes quota within the women’s reservation quota.

At the more subliminal level, it is more than likely that all parties are privately against the women’s quota, since this would mean many male MPs will have to give way to women in future elections. In panchayats, where such reservations are already in place, many of the women elected tend to be relatives of powerful male politicians, but, over time, some of the women have learned the art of getting things done without necessarily falling in line with what their husbands, sons or brothers or in-laws may want them to do. Over time, women will learn to act in their gender’s and society’s best interests, and not behave like appendages to the men in their lives.

So, it is possible that the BJP is trying to delay the women’s reservation bill by tying it to triple talaq and nikah halala, but this is a poor demonstration of the party’s commitment to women’s representation in legislatures. Perhaps, Narendra Modi should step in and delink the two ideas.

The Women’s Reservation Bill is valid on its own, and so are bills to ban nikah halala and polygamy. As for triple talaq, the BJP needs to accept that sending violators of the triple talaq ban to jail may not necessarily be a good thing. It should accept a compromise where the offence is bailable, as long as the woman involved gets court protection when the offending husband is out.

The BJP will earn no kudos from women for making two forms of women’s empowerment contingent on a messy political bargain.

Even politically, the passing of the women’s quota bill with Congress support will mean sharing the credit with the opposition. Why would the BJP want to do that?

It would be far better to pass the women’s quota bill, and then challenge the Congress to back a bill to ban polygamy and nikah halala - a retrograde practice whereby a divorced woman has to get married to another man before reviving her old marriage if the previous husband is willing. Either way, the Congress will have to choose between passing the nikah halala bill and alienating a section of conservative Muslim voters. So why make a deal a pre-condition for passing the women’s quota bill? Sometimes, clever politics is no different from dumb politics.