BJP Is Playing The Communal Card In A Secular Way 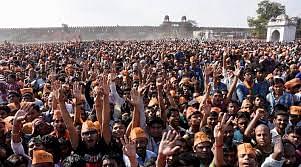 People at a BJP election rally in UP

A communal card relates to seeking votes on the basis of a community identity of a voter. This identity can be either caste or religion. On this note, I will deal with caste, though the broad outline will also apply to religion.

Probably the most original thinker in sociology in post-Independent India, Prof M N Srinivas, observed two important phenomena in society, to which he gave a term each to make the concept popular. One is Sanskritisation – whereby a caste supposedly in the lower rungs of the society works as a group to bring itself up. It does this by education, skill development, etc, and not just observing the rituals of the upper caste, important though that is. The caste identity helps in empathising with the less fortunate members who need to be brought up. This process is an activity which need not depend on state support – in fact, in modern day politics, sometimes those in control of the state may actually try to suppress the movement, so that the group does not become a threat to their hold on the instruments of patronage.

The second is dominant caste – whereby a group tries to get electoral power and so can funnel the various government schemes for the benefit of the particular caste. A dominant caste will vary from one electoral constituency to another, depending on the demographic composition. The summary of what Srinivas postulated can be gathered from these two quotes. The first is by Prof T N Madan as follows:

The 1950s were witness to elections in India at various levels on the basis of universal adult franchise. Prof Srinivas was quick to see that caste loyalties would be utilised in electoral politics. He came out boldly in a number of addresses and articles pointing out that caste would thus find a new lease of life, that it would not wither away under the impact of modern political institutions but adapt to them. T N Madan, “M N Srinivas: the man and his work”, The Hindu, December 8, 1999.

And the second is by Prof Andre Beteille as follows:

The prevalent view among educated Indians in the early years of independence was that caste was in decline: it had its importance in India’s past but it would have little importance in its future. This was the general opinion in Calcutta where I was a student in the mid-fifties and among economists, historians and political scientists in Delhi where I came to teach in 1959. The only academics who took caste seriously were the sociologists, and since I was one myself, I became the target of much light-hearted banter from the economists in the Delhi School of Economics. When M N Srinivas pointed out in his address to the archaeology and anthropology section of the Indian Science Congress in January 1957 that caste was acquiring a new lease of life in independent India, The Times of India commented that he was exaggerating its importance. Now newspaper writers are falling over each other to show how important caste is in contemporary India. Their newfound zeal and enthusiasm leaves serious students of the subject nonplussed.

A dominant caste is one, in the first-past-the-post system, that need not be more than 35 per cent of the constituency. The caste can acquire support from one of the minor caste (say about 5 per cent) to be able to win that particular constituency. Some of the benefits of the patronage can be promised to this minor caste – and since it is minor, the diversion would be quite small.

When the next election comes around, the castes that are denied the state benefits come together as a coalition and thus defeat the dominant caste. In effect, the coalition becomes a dominant caste group. And hence, the benefits are now diverted to another group of people. This, of course, creates as sense of bitterness in the dominant caste – but there is very little that they can do in a legal way.

The problem with the dominant group is how to share the spoils – obviously a caste that is less unfortunate will ask for a higher share. However, the members of the other castes may not agree with the principle, or not agree to the amount of diversion. This is particularly so when the amount of benefit that is available to be funnelled may not be sufficient to meet the legitimate requirements of the whole group – a situation that happens when the economic policy is geared primarily towards redistribution and not growth.

This creates conflict within the dominant group. Since the outward nature of the conflict is on the basis of caste, sociologists try to project the conflict on the basis of social disadvantage ingrained in any hierarchical system. I feel that this projection is more due to the biased way that many sociologists have been trained to look at issues. This happens particularly when the dominant caste also becomes part of the conflict. However, it is clear that the reason for the conflict is a secular issue – how to share the limited benefits that the state is able to provide.

In Indian politics, in terms of caste, three broad groups are defined. The supposedly lowest is called the Dalits, the next is Other Backward Castes (OBCs), and the third is the upper caste. However, within each of these groups there are sub-groups, and also sub-sub-groups. In the context of the Uttar Pradesh, within the Dalits are the Jatavs and the non-Jatavs, and within the OBCs are the Yadavs and non-Yadavs. One talks about two sub-groups because the political leaders in Uttar Pradesh of each of these two broad groups – the Dalits and the OBCs – are members of the two sub-groups. Thus there is a perception, often backed by anecdotal evidence, that the political leaders are concerned only about their own sub-group, and thus deny the state benefits to the others in the broad groups.

And this is where the BJP has come in. They tapped into the disenchantment of the non-dominant castes in the two broad groups, and formed a coalition with the third broad group, namely the upper caste. In electoral terms, together they would form 55 per cent of the total voter base, and in a situation of polarisation getting 40 per cent of the votes is quite possible.

As can be imagined, the communal interest of each member of the coalition is different, and it will be difficult to satisfy them. The BJP thus projected a secular programme – sabka saath, sabka vikas (collective effort, inclusive growth). This is an extension of their earlier secular programme – justice for all, appeasement of none. It is also a programme with emphasis of growth and not just redistribution.

Over the last 25 years, in a haphazard way, growth has taken place. Often this has happened despite the government. This limited growth has satiated some of the aspirations of the people, particularly the young. More importantly, it has given confidence to the people that if someone comes with a genuine programme to facilitate growth, growth will happen. Prior to 1980, people saw that programmes like Garabi Hatao (Abolish Poverty) were mere slogans with no concrete action plan.

And it is here that the performance of Narendra Modi during his tenure as chief minister of Gujarat has served the BJP well. One can quibble about whether the promises have been fulfilled to the letter of what was said. Thus when people saw power being available for more than 20 hours a day (instead of the earlier four hours a day), they did not grudge the slogan of “Twenty-four hours power supply”. Also, the accelerated growth in Gujarat created job opportunities for people, and much of it was filled with migrants, who saw a stark contrast to their own home states.

It needs to be stated that the leaders of the Yadavs and the Jatavs in Uttar Pradesh also tried to align themselves with the members of the Islamic community. Like in case of their own caste groups, the vote was sought to be delivered through the leaders of the Islamic community. By its very nature, when one talks about a religious group, the leaders are the clerics and not the non-clerics. What was needed to be done was to satisfy the demands of these leaders – and, hence, you had programmes like funding the Madarsas, promoting Urdu, building Haj houses, support the construction of burial grounds, organise Iftaar parties, etc.

This was done in a highly visible manner, because the leaders thought that not only their own sub-group, but also the larger group, would still vote for them. What was not recognised is that the sub-group had also a cultural and civilisational identity – the Hindu. They said that why should not their cultural and civilisational needs be also met, if that is what is given to the Islamic community. This created a ripe ground for a counter polarisation, on top of tapping the secular disenchantment due to the patronage being available only to the dominant sub-caste within the large caste group.

Thus the new coalition of the caste groups was engineered on the basis of secular issues. And seeing their appetite for fulfilling all their aspirations – communal and secular – can be met, the members of the coalition groups were willing to listen and to believe.

The final issue is whether the programme of a New India, initiated by Modi through his post-Uttar Pradesh victory speech, is restricted to the members of the new coalition. If better roads are built, health services improved, opportunities for getting good education is provided, etc., how can it be restricted only to the members of the new coalition? Time and time again, the BJP leaders have said that they never ask for the communal identity of the recipient of the better service. And, as the economy grows, more and more resources will become available to some service that only a state can provide.

The programmes demanded by the new coalition will truly fulfil the essence of the promise made in the Sabka Saath, Sabka Vikas slogan. And it will then not remain only as a slogan.