More BJP Self-Goals: If It Wants To Fix JNU, Here's How To Do It 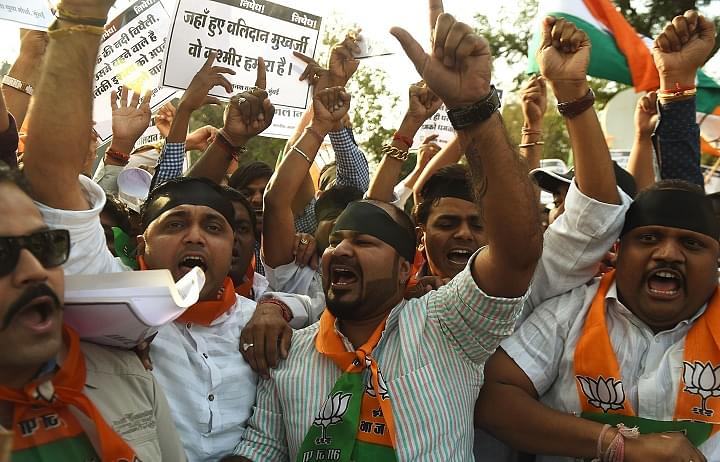 The BJP has perfected the art of scoring self-goals. Nothing illustrates this better than the way it is mishandling the Jawaharlal Nehru University (JNU) crisis – a crisis unnecessarily aggravated by itself.

The BJP needs to understand that nationalism is a blunt instrument that is of limited use. In fact, it should be used only strategically. It works when there is a Kargil war on or there is a major terrorist attack. It does not work if the party in power starts swinging the club every now and then, trying to swat every passing pamphleteer or slogan-shouter. In doing so it will end up turning rogues into heroes. Rogues need to be exposed, not turned into objects of reverence.

Consider how it has messed up in JNU. An event is held where anti-India slogans are shouted. A video on this sloganeering goes viral, and, almost on cue, the Home Minister and the HRD Minister promise strong action against “anti-nationals” and before we know it the police pounce on students like T-Rex and arrest the union chief. Students and teachers, and all political parties, suddenly close ranks and the BJP is isolated. Now it is difficult to extricate itself from this mess without serious loss of face. Maybe, it has just bid goodbye to any chances of legislation in the budget session.

The problem with the BJP is that it is reacting in anger and hitting out in all directions because it realises that the media playing field is tilted against it and the ecosystem created by the Congress-Left dispensation over half a century is inhospitable to its ideas. This was amply demonstrated in the phony “intolerance” debate, but lashing out in anger only proves the point of intolerance. When you don’t hold the high cards, you have to play smart, not strong. The BJP has, however, played only dumb hands, and has allowed its opponents to stomp all over the pitch.

The only way to defeat a stronger rival is to, first, give him a long enough rope to hang himself by allowing him to make mistakes. Then, one can adopt a sophisticated media language to speak on the issue; and third (most important) point is that it must launch only tangential attacks, never frontal ones, on the enemy. The lion must not be attacked in its den, but harassed and humiliated into weakness before it is subdued.

In the JNU case, the logical thing to do was to let the anti-national sloganeering play on, and give it widespread publicity in the national media, and launch a probe into it quietly to gather more evidence. This evidence should then be leaked to the media and allow it to do its damage – the chances are it is the JNU students who will be isolated from the country’s mainstream for their outlandish sloganeering.

The media strategy needs to be equally sophisticated, where the formal briefings must sound indulgent towards the students even while the evidence is being gathered to nail them. If nothing turns up, the government should let it die; if the evidence turns out to be damning for the students, it can be let loose on the nation and let the outrage build up before action is taken.

As far as the ecosystem is concerned, the BJP needs to understand that it will remain hostile to it for the simple reason that it has created many stakeholders – from students who get pampered with taxpayer money to professors who get tenure and researchers who have been fed by the Congress-Left forces for more than 50 years. Any direct attack will only make the enemy close ranks and fight back hard. This is counter-productive.

When you threaten vested interests, you must isolate them and take them on one by one, not all together. If you do the latter, as the BJP has done at JNU, you can’t expect anything but resistance. To be sure, JNU is not all bad. Large parts of its science, tech and other parts are vibrant and useful to India. It is only the social sciences and humanities that have harboured nests of vipers.

The right way to deal with a hostile ecosystem is to not attack it frontally, but to starve it slowly and create a rival institution. Just as the Board of Control for Cricket in India (BCCI) is a den of vested interests, the JNU too is one. And just as the BCCI cannot be fixed by helping it retain its monopoly, the best way to tame JNU is to create a bigger rival which draws the best talent. JNU will then learn to behave.

There is no point in the BJP trying to make JNU less Left; a dog’s tail cannot be straightened by putting it in an iron pipe; it will revert back to its curvature once it is out. The same applies to institutions like the Film and Television Institute of India (FTII), where too the government has been unable to quell the protests with strong-arm methods.

The way to tame institutions like these are the following:

First, freeze funding, and ask the autonomous institution to finance incremental growth in expenses from private sources. JNU gets over 90 percent of its non-plan revenues as UGC grants, and it is worth putting a crimp in the pipeline of future money. This is actually good for the university, since it will then be forced to be self-sufficient, and focus on those areas where funding will be easy to get from private sources. In 2014-15, JNU got Rs 276 crore as grants for its non-plan budget; it got less than Rs 25 crore from other sources like fees and rental income. Time to change that. Even the FTII should be asked to find private funding for growth.

Second, pour state resources into new institutions to rival JNU, manned with top-class talent and facilities, and provide long-term tenures to some key professors and scholars. Thus, any future government that tries to alter the new institution’s political orientation can be met with screams about infringement of autonomy – as JNU and even Nalanda University’s over-aged boss till recently, Amartya Sen, have been doing. Not just one, but several institutions must be floated, and many of them given autonomous sources of revenue and private capital infusions right from the start to grow and flower.

Third, create evaluation parameters for all prestigious universities like JNU, and ensure that pay and career progress happens only on the basis of higher productivity and quality output. This will automatically focus students and faculty on the academics and less on extra-curricular flirtations with the ghosts of Afzal Guru and Che Guevara.

Fourth, never wrap yourself in the national flag when dealing with student politics. Students are, by definition, rebels, and some of them must be dealt with indulgently, with a mere tut-tutting. The BJP’s tendency to use nationalist rhetoric in cases of student agitations is foolish and will surely backfire. It does not appear to have learnt anything from the Rohith Vemula affair, where it was shown up as a bully; one hopes it learns something from the JNU fracas.