BJP Vs Rest: Arithmetic Looks Good For Opposition, But Modi Still Has The Edge 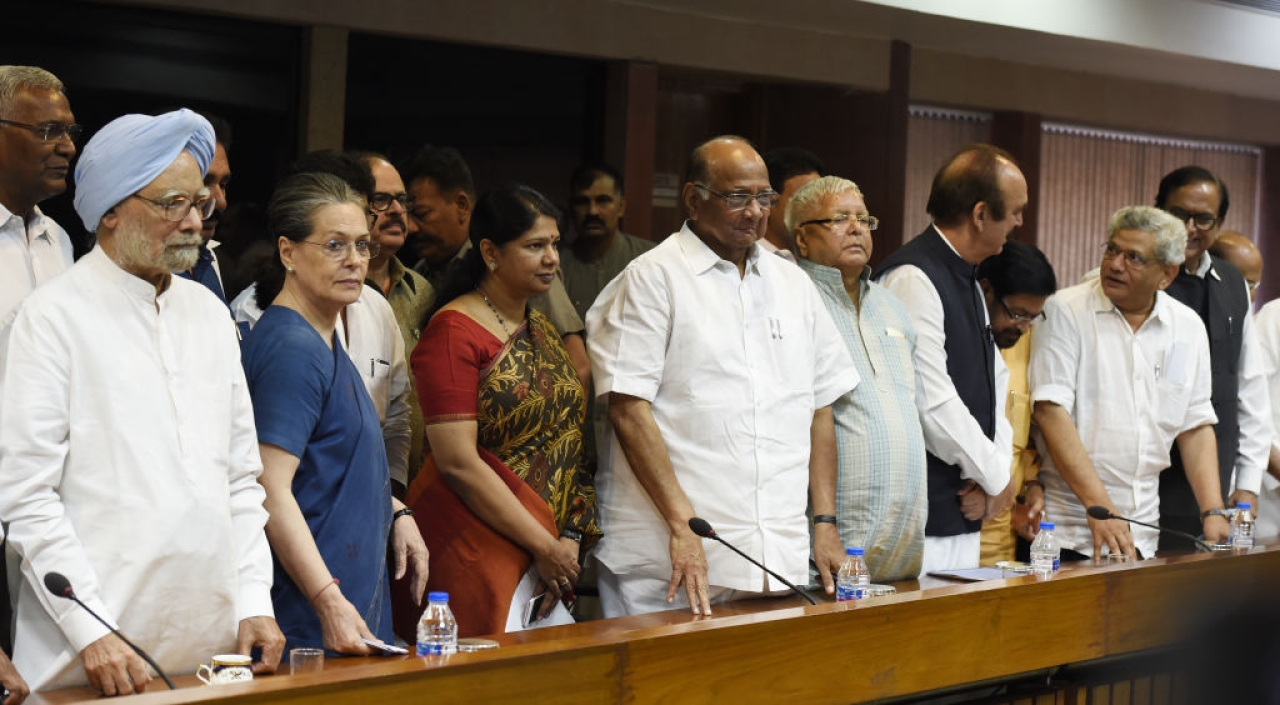 Leaders of the opposition parties in New Delhi. (Arvind Yadav/Hindustan Times via GettyImages)

Ever since the Congress and the Janata Dal (Secular) or JD(S) managed to spike the Bharatiya Janata Party’s (BJP’s) guns in Karnataka, the index of opposition unity (IOU) showed a spike upwards. In Karnataka, the bigger of the two coalition partners, Congress, agreed to play second fiddle to the JD(S), and with Uttar Pradesh setting the trend with the Samajwadi Party-Bahujan Samaj Party (BSP) alliance in the recent byelections, it is now clear that an anti-BJP, anti-Modi alliance is in the works for 2019.

The question is whether this alliance can work at the all-India level, or whether its internal contradictions will make it ineffective in all but a few states.

The anti-Modi alliance is claimed to be a coming together of “like-minded” parties, driven by the common thread of “secularism”. Well, if this grouping (which will surely include the likes of communal outfits such as Assam United Democratic Front, Indian Union Muslim League, Majlis-e-Ittehad-ul Muslimeen and Kerala Congress) is “secular”, I am Nelson Mandela. Far from being a motley aggregation of the “like-minded”, it would be far better to describe this as an alliance of “dislike-minded” parties. They are united only by an extreme and pathological dislike of the BJP, and particularly, Narendra Modi.

However, this is not to suggest that it does not have the potential to disrupt Modi’s hopes for a second term. There is reason to believe that the National Democratic Alliance (NDA) can cross 200 seats even in this scenario, but anything far short of 272 means a ragtag bunch will at least have the arithmetic ability to create a non-BJP government at the Centre in May 2019.

Some spokies of the BJP, and some anchors in TV channels, have challenged this coalition of dislike on how they will resolve the leadership issue. Who will be projected against Modi? Who will be your PM?

While this is certainly a weakness, this is a wrong argument for now. The issue is not who against Modi, but who against the BJP in which state? As long as the Lok Sabha elections are fought like a bunch of unconnected state elections, the leadership question will not matter until after the elections are done. If the BJP is fighting Lalu Prasad Yadav and Rahul Gandhi in Bihar, Chandrababu Naidu and Congress in Andhra Pradesh, Akhilesh Yadav and Mayawati in UP, DMK-PMK and Congress in Tamil Nadu, and so on, the BJP’s national presence and Modi’s towering personality can be successfully challenged. In short, as long as the alliance does not make Modi the subject matter of the election, they have a good chance of stopping him.

The real problem is that this opportunistic coalition will have little legitimacy even after a resounding victory it defines its purpose as something other than anti-Moditva.

Yes, this coalition can be legitimate if it is constituted for the sole purpose of ruling at the Centre for, say, a year, and rejigging the Constitution to devolve more powers to the states, and limiting the responsibilities of the Centre to a few core functions like defence, inter-state crimes, foreign policy, macroeconomic and monetary management, and setting of standards for all national services like railways, inter-state roads, telecommunications, etc. A move towards true federalism is a legitimate goal for even parties that cannot have any other area of agreement barring anti-BJP rhetoric.

If greater federalism is the only goal of Year One, it does not matter who the prime minister is, for his or her rule will be transient. However, if the coalition hopes to rule the Centre as if it were a single party, it will fail – and will have no legitimacy. As the 1996-98 years showed, regional parties do not trust other regional parties with the powers currently available to prime ministers or parties ruling at the Centre. Khichdi coalitions tend to choose PMs, who have a very weak base (hence H D Deve Gowda) or no base (eg, I K Gujral), and not politicians with real regional power. Thus, a Lalu Yadav will spike the guns of Mulayam Singh, and the Telegu Desam will veto the elevation of Telangana Chief Minister K Chandrashekar Rao. In 1997, when Deve Gowda had to go, DMK leader M Karunanidhi is said to have vetoed the elevation of G K Moopanar, then the head of the breakaway Tamil Manila Congress. The DMK could not stomach the idea of another Tamilian getting the top job in the country.

So, without a mandate for greater federalism, where who is PM could be decided by lots and the job could even be rotated like the European Union presidency, a non-BJP front will either have to accept the Congress as its anchor or promote a toothless leader, who matters little even in his own state. It will not be a Mamata Banerjee or an Akhilesh Yadav or a Mayawati heading the country.

The question now is whether even with a mandate for greater mandate, the anti-Modi coalition can come to be. And with what kind of numbers. The answer is it can succeed in some states but will probably not be able to shrink the BJP down to below 200 seats (at current reckoning). The party can bounce back once the coalition falls.

Here’s how the numbers could stack up.

In Himachal Pradesh, Rajasthan, Madhya Pradesh, Chhattisgarh, Uttarakhand and Gujarat, it is a straight Congress-BJP fight. These states have 100 seats between them. It is a fair guess that the BJP should get at least 65-70 seats in these states. We can add Odisha to this list, with 21 seats, where the contest could be Biju Janata Dal versus BJP, with Congress in the reckoning only in some seats. If the BJP wins 10 seats here, it will take the tally to 75-80.

Uttar Pradesh is where the BJP will be most tested by the SP-BSP (and possibly Congress) alliance. But any anti-BJP coalition will be seen as an anti-Hindu coalition, and could result is some degree of counter-consolidation. If this happens, the BJP could retain 40 of the 80 seats. This brings the BJP tally to 115-120.

In Bihar, if the BJP-Janata Dal (United)-Lok Janashakti Party coalition holds, it should garner at least half of the 40 seats, which takes the BJP-NDA total to 135-140.

Then we have states with three-way or four-way contests. These include West Bengal (Trinamool plus Congress versus BJP versus CPI-M), J&K (PDP versus Congress plus NC, versus BJP), Punjab (Congress, versus SAD-BJP versus AAP), Delhi (Congress, AAP and BJP), Andhra Pradesh (TDP-Congress, BJP and YSR Congress), Telangana (TRS, Congress, BJP, MIM and the new Telangana Jana Samithi), Maharashtra (BJP, Shiv Sena, and Congress-NCP), and Jharkhand (BJP versus RJD-Congress-JMM). If the BJP tries hard to hold on to the fraying Sena alliance in Maharashtra, these states should together yield another 50 seats, taking the NDA total to 185-190.

The NDA could gain a few more seats if it has a covert seat-sharing alliance with YSR Congress in Andhra, and with the TJS in Telangana), but we can discount them for now. In Tamil Nadu, where the non-DMK parties are splintered, and with the entry of two new parties under film heroes Rajinikanth and Kamal Hasan, a DMK-PMK-Congress alliance would garner most of the seats. The BJP may get two or three seats at best, depending on local alliances in some constituencies. So, the NDA total could be around 190-195.

If the Sena goes it alone or fights with the Congress-NCP, the BJP will lose more seats, but make the Sena irrelevant in due course. A Sena in the Congress camp will commit hara kiri. In West Bengal, if the CPI-M does not ally with Trinamool or enters in a covert seat-sharing arrangement with the BJP, it is heading for oblivion. It will help the Trinamool deny the BJP seats, but will effectively leave the BJP as the second party of West Bengal after the election. So, Maharashtra and West Bengal are two states where the BJP could lose some seats, but this is not a given.

Then we have states where the anti-BJP coalition will work best. These states include Karnataka and Assam. In a national election, and with some Hindu vote consolidation, the BJP could still end up with 15 seats in Karnataka and seven or eight in Assam, with the Congress-AUDF taking the rest. In Kerala, where there will be a three-way fight between UDF, LDF and the BJP-plus, the BJP could win at best one seat (Thiruvananthapuram). Add these 23 seats, and the NDA total goes up to 213-218.

The remaining states with one or two seats, adding up to about 15 in the north-east, Lakshadweep and Andamans, et al, could see the BJP getting seven of them on current form. This takes the NDA total to 220-225.

However, what we are discounting in this numbers game is the chemistry. If Narendra Modi manages to improve his already solid standing with the public in the remaining year ahead of May 2019, one cannot rule out a higher total. If BJP chief Amit Shah manages a lot of micro-alliances in many states, as he did in UP last year, the BJP could still be within shouting distance of 272. This means you only need one or two regional parties for making a solid BJP-led coalition.

And one should certainly not rule out another wave election.

The BJP now has a more determined coalition against it, but arithmetic, as they say, is not chemistry.

Advertisement
Jagannathan is Editorial Director, Swarajya. He tweets at @TheJaggi.
Get Swarajya in your inbox everyday. Subscribe here.
Tags:
896 Shares