BJP’s ‘Aar Noi Annay’ Campaign For Bengal Is Good, But May Not Be Enough To Unseat Trinamool In 2021 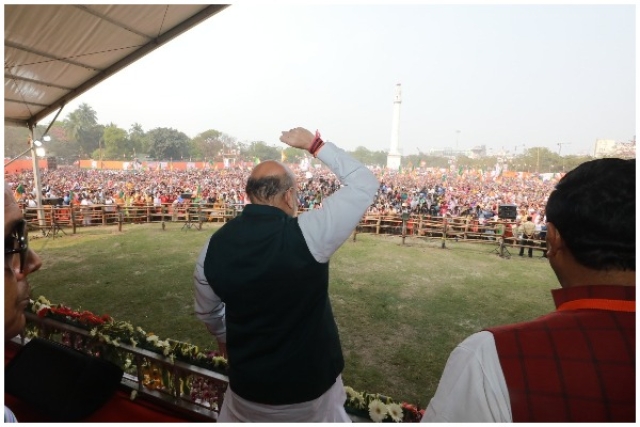 The Bharatiya Janata Party (BJP) has at long last come up with its own ‘Aar Noi Annay’ (No More Injustices) to counter the Trinamool’s ‘Didi Ke Bolo’ (tell Didi) campaign.

Union Home Minister Amit Shah launched the campaign at an impressive rally in Kolkata on Sunday.

The campaign, hopes the BJP, will be the perfect foil to the Trinamool’s ‘Didi ke bolo’ outreach that has been designed and is being executed by Prashant Kishore’s team.

Shah has set the mood for the forthcoming polls to more than a hundred civic bodies (including the Kolkata Municipal Corporation) in April and for the crucial Assembly elections next year.

His speech (watch this) was a call to BJP cadres to launch an aggressive political battle against the Trinamool.

Shah’s speech indicated that the Citizenship Amendment Act (CAA) will be central to the BJP’s combative pitch against the Trinamool in Bengal. Shah accused Mamata of protecting illegal Bangladeshi Muslim infiltrators while opposing citizenship to persecuted Hindus and other minorities from Bangladesh, Pakistan and Afghanistan.

Appeasement of Muslims was another highlight of Shah’s attack on the Trinamool. He highlighted the fact that restrictions have been put on organising Saraswati Puja in schools and on Ram Navami celebrations.

He also highlighted the removal of Article 370, contending that it was a fulfilment of Shyama Prasad Mookherjee’s dream of ‘Ek Vidhan, Ek Pradhan, Ek Nishan’ (uniform law, one chief and one flag).

He also said that the long-cherished dream of Hindus for a Ram Mandit at Ram Janmabhoomi has been finally achieved, thanks to the BJP’s untiring efforts.

Shah held the Trinamool responsible for Bengal’s abysmal law and order situation, pointing to the rapes, murders, extortions and general lawlessness in the state.

He also accused the Trinamool of depriving the people of Bengal from the benefits of many welfare schemes launched by the Modi government and promised a ‘Sonar Bangla’ (golden Bengal) once the BJP comes to power in the state.

Will it be enough?

But this largely negative (anti-Trinamool) campaign has to be supplemented by a positive one telling Bengal’s masses exactly what the BJP will do when it comes to power in Bengal.

The BJP top brass have to prepare a comprehensive manifesto that will lay out a blueprint for the industrial and economic revival of Bengal.

This manifesto should not talk in vague terms about attracting investments and providing employment; it should spell out exactly how this is going to be done.

South Bengal, which includes Kolkata, has remained Trinamool’s bastion and if the BJP wants to come to power in the state, it has to breach this bastion in a big way. People of Kolkata and South Bengal are unlikely to buy vague promises.

The BJP also has to display concrete action on cracking down on corruption. The chit fund scams that defrauded millions of people, especially the poor, of their life’s savings was a fantastic opportunity for the BJP to display its resolve to punish the corrupt.

Unfortunately, thanks to CBI’s inaction and its failure to frame chargesheets against the guilty even after eight years, that opportunity has been squandered. The BJP’s corruption plank against the Trinamool will only seem to wok if and when people see action being taken against those the BJP accuses of corruption.

The BJP also has to put in place a shadow cabinet with credible faces to project a viable alternative to Bengal’s electorate.

Going to the Assembly polls next year without a chief ministerial face and without an impressive lineup of names who will helm important ministries like finance, industries, home, health, urban and rural development, agriculture, water resources, education, IT, transport etc may not be a good idea.

This is especially true for those urban or semi-urban, educated middle-classes who might be looking to vote out the Trinamool, but would want to know the alternatives that the BJP offers.

The BJP, thus, needs to frame a positive campaign offering a concrete blueprint. Just promising ‘Sonar Bangla’ may not find many takers.