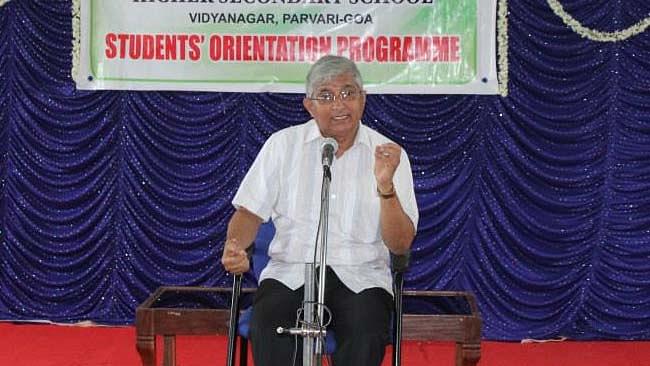 In a very significant development, on 31 August 2016, the popular RSS chief in Goa, Subhash Velingkar vowed to defeat the BJP and endorse another alternative in the upcoming 2017 Assembly elections in the state. Velingkar told reporters:

The political front which Bharatiya Bhasha Surakhsha Manch (BBSM) would be floating will go it alone in the polls. We can join hands with Maharashtrawadi Gomantak Party (MGP) if they withdraw support to the BJP.

Now, consider how the mainstream media reported this news. Here is what The Indian Express had to say: “BBSM has been demanding that regional languages (Konkani and Marathi) be made the Medium of Instruction in Goa’s elementary schools, and Government should stop the grants of English medium schools.”

If one goes by the old media’s news reports like the above, one would get the impression that Velingkar is opposing the grants to English medium. Case closed.

But is he really? There is more to it than meets the eye.

Since the 1990s, Goa’s policy has been to only fund Konkani and Marathi medium primary schools. Of course, English medium schools were not outlawed. It’s just that they couldn’t get funding  from the government. That changed in 2011.

Responding to various claims by the church and by parents, in 2011, the Congress government decided to allow aid for English medium schools as well. Guess what happened? About 130-140 schools from the Marathi and Konkani medium immediately took advantage and switched over to English medium.

Almost all of them, 132 out of 140 schools are run by the Church. This is entirely expected because at the end of the day people want English medium.

In 2012, the BJP led by Manohar Parrikar won the Goa assembly elections. This was due to a strategic alliance with the Catholic Church as well as a promise made to the RSS that the policy of funding English medium schools would be overturned.

On 6 June 2012, the Parrikar government issued a notification saying that henceforth only Konkani and Marathi schools will be funded by the government BUT the schools that have switched over to the English Medium in the last one year would continue to get government aid. This is not all. The notification also mandated that only “minority/certain institutions that shifted to English medium would continue to receive funds”.

This predictably blew the RSS fuse under Velingkar and led to the formation of two opposing groups – Bharatiya Bhasha Suraksha Manch (BBSM) which was opposed to the aid to these minority schools, and FORCE - a group of largely Christian educationalists who stood to lose if grants were withdrawn.

This is the back story.

In 2016, there have been hectic parleys between BBSM and the BJP Govt but all appear to be in vain as the government under Lakshmikant Parsekar asserted that only church-run English medium schools would get government aid.

The basic reality of education sector in India is that the split is not private vs public but minority vs non-minority. This is what happens each time the government passes a law or makes rules curbing autonomy of the institutions. These rules do not apply to the minority-run institutions. Only the ones run by the majority suffer.

Parrikar may have won Goa largely due to the deal with the Catholic Church which meant the continuation of the govt aid to the Church-run schools. So he feels obligated to honour that deal. Besides, even if the current government tries to withdraw the grants, the schools may be able to restore them using the courts. It is unfortunate however that BJP would extend the aid to only minorities while ignoring the majority.

So what is the solution? Well, this Goa episode is just a small fry in the larger scheme of sectarianism in the Indian education. There can be no reform possible unless this is addressed head on.

The government must start with repealing the 93rd Constitution Amendment and the Right to Education Act. Until the uniformity principle replaces sectarianism in the education sector, no number of “New education policy” will help.

The twin principles of ‘Core Right’ are (a) if the state can’t enforce a law on all, then it should enforce it on none, and (b) if it wants to give aid to religions, then this must be done strictly on the pro-rata basis.

However, the assurance given by the Union HRD Minister Prakash Javadekar in Parliament to not ‘tinker with” Minority institutions on August 12, has further complicated the matters.

This piece was first published on Reality Check India’s blog.