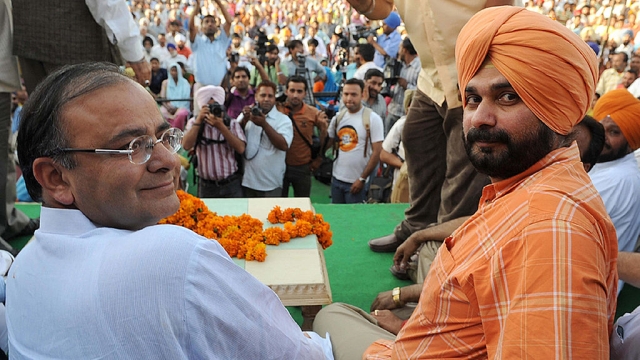 A lot of speculation was going on about cricketer-turned-commentator-turned politician Navjot Singh Sidhu’s impending exit from the Bharatiya Janata Party (BJP) until the party put all such rumours to rest by nominating him to the Rajya Sabha. Sidhu, however, had been in a dilemma – as is now evident from his press conference held yesterday.

Sidhu should not have accepted the nomination in the first place if the party extracted a promise from him to stay away from Punjab politics, as he claims. After all, nobody is sent to the august house without one’s consent.

The questions we should be asking now are:

(a) Why the half-hearted politician is given so much of importance? and

(b) Why another politician is being held responsible for his act of defection?

For long, there has been a popular conspiracy theory in place wherein the blame for everything that goes wrong in the government or the ruling party is pinned on the Finance Minister. Arun Jaitley is either too smart or isn’t. He cannot be both at the same time. Regardless of the “Modi wave” of 2014, even the staunchest of BJP supporters did not bet on Jaitley’s victory against Captain Amarinder Singh. Why then did Jaitley agree to contest from Amritsar, rather than from South Delhi or New Delhi, where people know him and have seen him at work or seen him socialise?

Remember, Jaitley was not only a prime figure in the BJP’s election committee but also someone who allegedly did not let Subramanian Swamy contest from New Delhi, saying that only a Punjabi was fit for that seat. So, how come he chose a seat where victory was far from certain?

The fact is that contesting from Amritsar was not Jaitley’s decision. It was not he who elbowed Sidhu out of that constituency. It was the Shiromani Akali Dal (SAD) that took serious exception to Sidhu contesting from there, as the former cricketer had had serious differences with the Badals. His celebrity status was not enough to vanquish Parkash Singh Badal with deeper roots in the political dynamics of Punjab, but a lesser Sukhbir Singh Badal perceived a threat from Sidhu’s rise.

But why would the BJP want to put a reliable ally into an uncomfortable position?

Jaitley has always invested in human relationships while managing his career in law and then in politics. It is believed that the BJP’s long alliance with the SAD in Punjab and the JD(U) in Bihar — the second is now over — owes to Jaitley’s equations with the Badals and Nitish Kumar respectively.

Jaitley was considered to be in Advani’s camp during the NDA one years. To cut him down to size, Pramod Mahajan – who was very close to Prime Minister Vajpayee – floated Navjot Singh Sidhu in Punjab and Ravi Shankar Prasad in Bihar.

When Sidhu says that he was summoned from Pakistan in the course of an India-Pakistan cricket series in that country, where he was a television commentator, it was Pramod Mahajan who had called him.

While all this made Jaitley look at Sidhu with unease, their relationship saw a thaw after Mahajan’s death. In fact, even Jaitley and Mahajan had patched up when the latter was alive.

Back To The Present

The SAD had threatened to pull out of the NDA if the BJP insisted on Sidhu. As nobody else was confident in winning against the Congress, the party leadership – with Narendra Modi as both the Election Committee Chairman and the BJP’s prime ministerial candidate – turned to someone who, despite his prominence, had never exposed himself to the vagaries of a vote. Jaitley accepted the offer reluctantly.

And then the expected thing happened. While Jaitley has been in charge of several of BJP’s successful electoral campaigns, he was more of a backroom strategist than a nuts-and-bolts man. As a candidate from Amritsar, he couldn’t take the karyakartas and swayamsevaks along. The cadre felt it was a coterie of his family that was deciding every move, and a well-oiled Congress election machinery saw Captain Singh through.

On the condition of anonymity, an old-timer in the BJP says that even Sidhu might have lost 2014 – given that his popularity was on the decline due to his no-show in the constituency. Indeed, his margin of victory of over 1,10,000 votes in 2004 had reduced to a mere 6,858 votes in 2009. Rhetoric and jokes had had their dream run.

Further, while the Aam Aadmi Party (AAP) could not win Amritsar, the massive votes it drew cut into the BJP’s share.

Having put the long-held speculation about Jaitley’s hand in Sidhu’s displeasure to rest, we now move to Sidhu fully. He has virtually been an MP in absentia between 2004 and 2014, judging contestants in comedy shows on television or commentating for cricket matches. Over the past year or so, it was his wife Navjot Kaur Sidhu who was negotiating better terms for him with the BJP, says another source in the BJP.

Now, what could the party have offered him? One idea was to go it alone, abandoning the old ally SAD – the way it had deserted the Shiv Sena in Maharashtra. But, unlike Maharashtra, where the BJP at least occupied the mind space of people even when it was a junior party in the alliance with Shiv Sena, it is constrained by both the absence of adequate cadre and an unfavourable demography in Punjab. Whenever the SAD-BJP alliance has won, the BJP’s votaries from the Scheduled Castes, OBCs and Banias of Punjab have proved decisive – as the vote shares of the Akalis and the Congress have traditionally been almost equal.

However, these votes that went to the BJP are not enough to make it win Punjab on its own. Also, many voters vote a party on the basis of its ability to rule; without the Akalis with it, the voters may not believe the BJP might assume power and, therefore, the BJP’s vote share would be even less.

Then there is the question of public perception about the Badals, which Sidhu seems to be disturbed by. He is eager to speak out against the likes of Bikram Singh Majithia (brother of Harsimrat Kaur Badal and brother-in-law of Sukhbir Singh Badal) who is seen by many as a part of a drug cartel. While no court has convicted Majithia, speculations about him simply refuse to die.

And, he is still not saying whether he is joining the Aam Aadmi Party. He evaded the question at the press conference. Reacting to his address to the press, a party leader said, “This is what happens when somebody else is talking to the party on your behalf.” This “somebody else” is none other than his wife, Navjot Kaur.

Finally, it is still difficult to foresee the outcome of next year’s Punjab elections. For a while, the Akalis liked the rise of the AAP, believing it to harm the Congress more. The AAP, while confident of winning the state, is witnessing a dip in its popularity now.

The ferocity with which the Congress MPs attacked Bhagwant Singh Mann in Parliament for causing a breach in the security of the House and the high frequency at which Ajay Maken speaks against the AAP indicate that the oldest party of the country is no longer looking at Kejriwal as an obstacle to the rise of Narendra Modi. Now, the Congress fears extinction.

Fighting the BJP through this proxy is a thing of the past. Pro-Congress people should now pray that the high command does not clip the Captain’s wings. A Punjab Congress, under his command, is still a formidable force. Rahul Gandhi must stay away.

If the AAP welcomes Sidhu, he cannot take his chief ministerial candidacy for granted. For, an insecure Kejriwal does not let anyone in his party grow bigger than him – which Sidhu will threaten to be as Chief Minister of a full-fledged state when Kejriwal’s domain Delhi is just a glorified municipality.

Meanwhile, the Akalis are confident of the Granthi-Jat Sikh vote. That makes it a three-cornered contest between almost equally strong parties. And Sidhu will now be in an equally precarious state – whether he wishes to continue in the BJP, where he has angered many, or defect to the AAP that is led by a restless rabble-rouser who doesn’t want anyone to grow bigger than him in the party.

In any case, Sidhu’s ability to carry the whole of Punjab on his shoulders has never been tested.