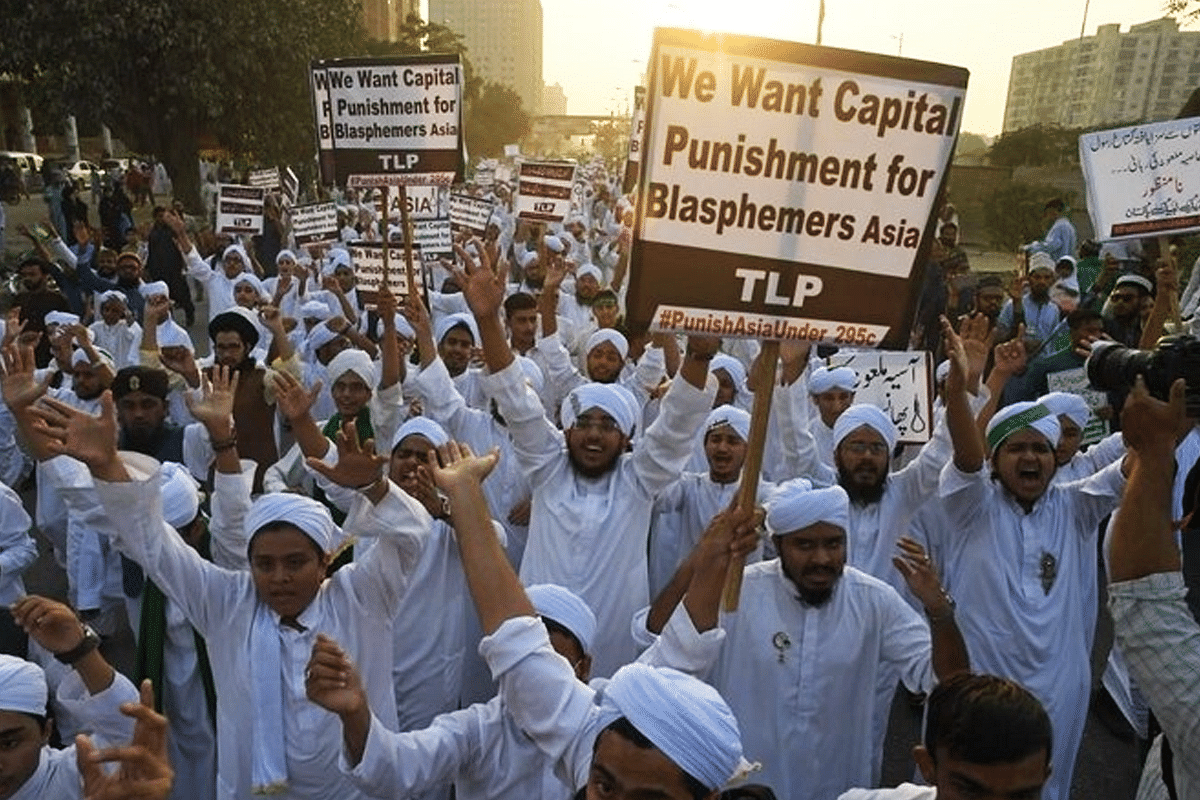 A woman in Pakistan on 19 January was handed death sentence by a sessions court for putting up a ‘blasphemous’ Whatsapp status on her mobile phone, in yet another chilling reminder of outcome of the country’s draconian laws on religious criticism.

The woman, 26-year-old Aneeqa Ateeq, has been convicted under laws pertaining to prohibition of insult to Islam’s founder Mohammad and his companions.

A letter by Additional Sessions Judge, Rawalpindi, Adnan Mushtaq, addressed to the superintendent of Central Prison of Rawalpindi, says that Ateeq has been convicted under Section 295-C and should be hanged by her neck till she is dead.

Aneeq is further convicted under Section 295-A, 298-A and Section 11 of the Prevention of Electronic Crimes Act 2016. These convictions carry a jail sentence of 10 years, three years and seven years, respectively.

Under Pakistan Penal Code, Section 205-C is about insult to Prophet Mohammad, 295-A is about deliberate intent to outrage religious sentiments, 298-A is about insult of companions of Mohammad and Section 11 of PECA is about dissemination of information by a device, likely to advance interfaith hatred.

The letter says that Aneeq’s hanging is subject to confirmation by Lahore high court. It is pertinent to mention that though Pakistan’s 295-C carries death sentence, it has never been executed. However, Aneeq is likely to spend 20 years in jail. Like under convicts under blasphemy laws, Aneeq runs a risk of lynching by fanatics if released on bail.

Aneeq is reportedly a Muslim, married to one Ateeq-ur-Rehman.

The complainant, Hassnat Farooq, accused her of putting up a post derogatory to Mohammad and his child bride Ayesha as her Whatsapp status, as per a report by Pakistan daily The Nation.

Aneeq’s counsel argued that she was of unsound mind at the time of the occurrence. However, despite orders by the magistrate, no medical examination was carried out on her. The prosecution proved its case through documentary and oral evidence, says the report by The Nation.

The British introduced the British Penal Code in 1860 in the Indian subcontinent. Given a history of Muslims throwing cow meat in Hindu temples and Hindus retaliating by throwing pig meat in mosques, Section 295 was introduced, which criminalised defilement of places of worship.

In 1920s, British India saw a spate of communal violence. In response to Muslim groups bringing out derogatory pamphlets against Hindu deities, Arya Samaji Mahashay Rajpal brought out a book named Rangila Rasool that was a satirical take on the life of Mohammad.

Complaints were filed against him, and he was jailed and tried in court. He was acquitted as the prevailing laws dealt with only religious places and speech. In 1929, a young fanatic named Ilm-ud-Din stabbed Rajpal to death.

The British went on to enact 295-A criminalising deliberate attempts to offend religious sentiments. Ilm-ud-Din is hailed in Pakistan as a “ghazi” and has streets and buildings named after him.

Both Pakistan and India retained the British Penal Laws after partition and independence in 1947. While India has not added to these religious criticism laws, Pakistan has added several more sections to them.

In 1970s, Pakistan laws declared Ahmadis as non-Muslims. In 1980s, military dictator Zia-ul-Haq passed 298-A which criminalised insult of companions of Mohammad.

Then, 298-B and 298-C criminalised the use of titles reserved for Mohammad (for instance, use of the word Prophet and its Arabic counterparts) and an Ahmadi calling oneself a Muslim, respectively.

Further, 295-B criminalised defiling of Quran. It is pertinent to mention here that the Punjab government recently introduced a similar bill to criminalise disrespect to Guru Granth Sahib (it was introduced as IPC section 295AA).

Pakistan further enacted 295-C that criminalises insult of Mohammad. After a few years, convictions under 295-C began to carry a mandatory death sentence.

Most of these laws in Pakistan are, in theory, religion neutral but majoritarianism ensures that non-Muslims do not make use of these laws as the majority Muslims do. Slurs against Hindus, who are a tiny minority in Pakistan, are particularly routine and blatant.

Violence over religious criticism in Pakistan and India

As per media reports, more than 4,000 cases have been filed in Pakistan under its various blasphemy laws since 1985. This correspondent could not find a separate figure for cases under 295-C.

While many have been given the death sentence under this law, no one has really been executed, as higher courts stay, overturn or commute the sentences given by lower courts.

This does not stop fanatics from taking law into their own hands.

Since 1992, at least 52 people facing blasphemy charges have been extra-judicially killed in Pakistan, as per reports.

Violence over blasphemy has emerged as an alarming issue also in India, where several Hindu leaders, particularly those from Arya Samaj, were killed by Muslim fanatics for blasphemy of Mohammed in the run-up to partition.

In 2010, a college professor from Kerala, TJ Joseph, was brutally attacked by a group of fanatics acting on a fatwa to chop off his limbs. The professor escaped death but was left with his hand completely severed from his arm.

In 2019, Uttar Pradesh resident Kamlesh Tiwari was hacked and shot to death in his office. Both Joseph and Tiwari were facing trial under 295-A.

Despite everyday reminders of the menace of religious criticism laws in Pakistan, Indian Muslim groups have been frequently hitting the streets of late demanding similar laws in India.

This correspondent reported how, during the first lockdown in 2021, fanatic groups across India carried out rallies in streets raising beheading warnings against anyone accused of insulting Islam or Mohammad. They also demanded death sentence for blasphemy-accused.

The rallies were triggered by remarks made by Yati Narsinghanand, priest of a temple in Uttar Pradesh’s Ghaziabad, about Mohammad at a private gathering.

Such rallies were carried out in Bareilly, Ajmer and Jammu, among other cities.

The slogans of “Gustakh-E-Rasool ki ek hi saza, sar tan se juda, sar tan se juda (There is only one punishment for speaking against the Prophet and that is beheading)” were raised repeatedly even as protesters carried pictures of Narsinghanand.

In Kanpur, a large hoarding asking for beheading of Narsinghanand and Waseem Rizvi was put up at a street. After outrage by social media, it was removed by police.

In November, the All-India Muslim Personal Law Board (AIMPLB) formally demanded enactment of a law against insult to Mohammad and other Islamic holy figures.