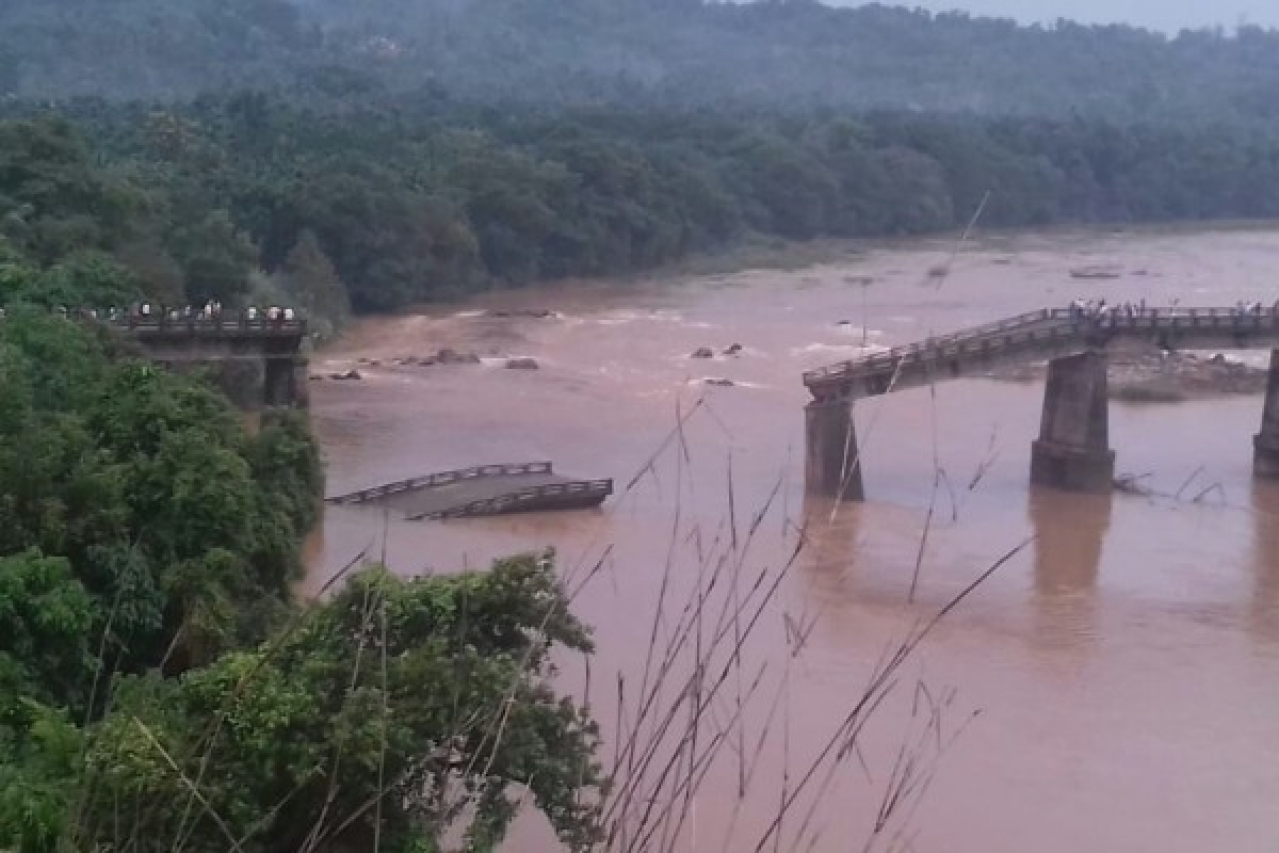 A look at the collapsed bridge from afar

We have now seen the first casualty of a faltering administration. A bridge built in 1980 has collapsed not due to rain and floods, but due to illegal sand mining. The life of the bridge as prescribed by engineers back in 1980 was 100 years. But thanks to the sand mafia, its life has been cut by 62 years, says National Environment Care Foundation (NECF) activist Shashidhar Shetty. The bridge connecting Mangaluru and Buntwal taluks at a place called Mullerpatna-Kuppepadavu collapsed on 25 June.

The NECF had warned the district administration of this eventuality a year ago after sand lifters were using heavy earthmoving machinery to remove sand from the Gurupur and Nethravati Rivers and their confluence – despite a ban on using heavy machinery. However, removing sand by way of traditional sand boats was allowed as they do not harm the underwater dune system nor any of the structures built across the rivers, mainly the bridges. But mechanised sand mining goes deeper and scoops up sand in a brutal way, say officials of the department of mines and geology.

According to the local manual, sand workers and the mechanised sand mafia had picked up fights with officials frequently, and have chased them away with the help of goons.

It was also in the same area that goons had attacked officials of the minerals department in 2013. Gopal Naika, a manual sand miner, told this correspondent that one of the barges that carries heavy earthmoving equipment had collided with one of the pillars of the bridge in the first week of June. The sand mafia of the district has been backed by political heavyweights in the state government such as former member of legislative assembly (MLA) B Ramanatha Rai and his man Friday, Prakash Shetty, a Zilla Panchayat member, both of whom have been accused of protecting the mafia.

Abdul Majid, a sand mining labourer in Gurupur, says the mechanised sand miners are politically well connected, owing to which they were able to transport sand to Mysuru, Bengaluru, and to southern districts of Kerala at high costs. “Our sand used to cost not more than Rs 3,000 per truck load in and around Mangaluru, but the same sand used to be sold in Kerala at Rs 72,000 per truck load and over Rs. 35,000 in Mysuru and Bengaluru. This business is one of the greatest cash cows of the previous government,” Majid says.

Speaking to Swarajya, MLA of Buntwal, Rajesh Naik, said, “They have been so ruthless in mining sand from the bridge area using mechanised equipment, that I had complained a year back to the department and to the district administration, but nobody took any notice. Last summer, I went to the area and took a closer look and was shocked to see that they had dug below the foundation level and there were indications that the bridge was already destabilised. But the people in power did not bother about the complaints that I and several others had lodged.”

Deputy Commissioner of the district, Sasikanth Senthil, and Chief Executive Officer of the Zilla Panchayat, M R Ravi, inspected the fallen bridge but were not able to account for the destabilisation of its pillars. However, they only said that the causes for the collapse would have to be investigated by experts. After the inter-district transportation of sand was banned, smugglers have been using the cover of the night to transport sand from the coastal areas to Bengaluru and Mysuru.

A sand miner, who is now without any blocks, told Swarajya that the department has delayed licensing of sand mining for more than two months just to facilitate the illegal sand trade from Dakshina Kannada to Mysuru and Bengaluru, where powerful political lobbies work hand-in-glove with the construction and real estate lobbies. The interstate and inter-district sand smuggling is channelised through railway wagons and concrete ready mix trucks. On two occasions, police have stopped Mangaluru-Bengaluru goods trains at Buntwal and confiscated five wagons filled with sand in 2015 and 2016. Sand smugglers also hoodwink officials at check posts in Kannur and Gundia on National Highway 75 and at Talapady on National Highway 66 by forging documents of the mines and geology department, forcing then deputy commissioner, A B Ibrahim, to install closed circuit television surveillance of all three check posts.

Officials from the department of environment and ecology as well as fisheries were opposed to sand mining activities during the monsoons as it disturbed breeding activities of different varieties of fish. The sand miners, however, claimed that there were no fishing activities being pursued in the rivers of Dakshina Kannada.

According to statistics from the mining and geology department, there are 38 blocks of sand and 19 sand bars where mining was done in the district. The total area coming under sand mining was 1,100 acres, for which 250 licences were given out for extraction. According to statistics, 6,000 tonnes of sand was available per acre and the total sand available for extraction was 210,000 tonnes per annum, of which 120,000 loads were being extracted per annum.

The district administration will hold a public hearing on 20 July to determine the need for extracting sand in the monsoon period. Former head of the department of applied mechanics at the National Institute of Technology, Karnataka, Dr S G Mayya, who has studied the availability of sand in the area, had indicated that a committee had recommended reduction of mining by 30 per cent owing to the deficient monsoons, particularly in the Gurupur River.

Get Swarajya in your inbox everyday. Subscribe here.
Tags:
457 Shares