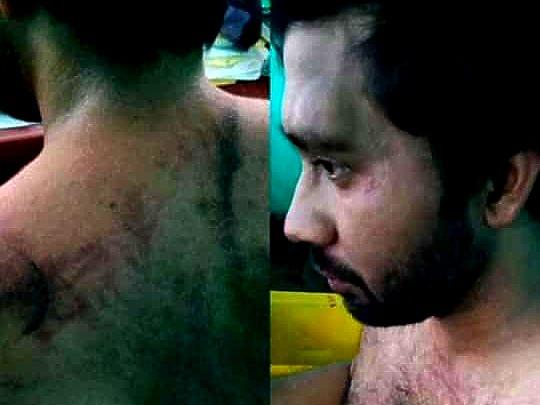 The horrific assault on a doctor at a state-run hospital by a mob of Bengali-speaking Muslims in Assam’s Muslim-majority Hojai district has, expectedly, generated a lot of outrage across the country.

The shameful incident occurred at the Lanka Fultoli Model Hospital, which had been converted into a covid care centre, on Tuesday (1 June) afternoon.

A critically-ill patient suffering from a coronavirus infection was brought to the hospital around 11am and passed away at 2pm. Even as the on-duty doctor there, Seuj Kumar Senapati, was attempting to insert a catheter.

Relatives of the patient, mostly uneducated, thought the man died due to the procedure being carried out by the doctor and started assaulting him with brooms, sticks and hospital equipment.

A few ladies were also in the mob of men speaking in a Bangladeshi dialect (watch the video of the assault in this tweet).

Chief Minister Himanta Biswa Sarma was quick to condemn the “barbaric assault” and asked the state police to arrest the criminals.

Sarma directed the state’s special DGP G.P.Singh, to monitor the case and Hojai district police chief, Barun Purakayastha, to lead raids and nab the criminals. He said he is “personally monitoring” the investigations.

The Assam chief minister has revealed the names of 22 of the criminals who have been identified by the police (see this).

While the Assam Police will, no doubt, arrest all the culprits and prepare a strong charge sheet to ensure that all of them are sent to prison, the entire incident once again lays bare the perils that Assam, once a very peaceful state, is facing due to the irreversible change in its demography caused by the presence of millions of Muslim infiltrators from Bangladesh.

Hojai district, which was carved out of central Assam’s Nagaon district, was never a Muslim-majority area.

In the 1951 census, the percentage of Muslims in Hojai, Dabaka and Lanka tehsils (these three tehsils make Hojai district) was less than ten per cent.

Today, the overall percentage of Muslims—and all of them are Bangaldeshi-origin Muslims—in the Hojai district is nearly 54 per cent.

Hojai was ruled by Kachari kings till it became part of the Ahom kingdom during the reign of the legendary Swargadeo Gadadhar Singha (also known as Supatphaa) in the late seventeenth century.

The word “Hojai” is of Dimasa origin; Dimasas are an ethnic tribe who speak a Tibeto-Burman language. The priestly class of the Dimasas are called Hojaisa, and since a large number of them used to live in what is the present-day Hojai district, the area came to be known as such.

After the Sylhet referendum of 1947, which led to the separation of the Sylhet division from Assam and its attachment to East Pakistan, a large number of Bengali Hindus migrated to Nagaon and settled in towns like Lumding, Hojai and Lanka (Lumding and Lanka are in present-day Hojai district).

Before that, the British encouraged the migration of many landless peasants from East Bengal (as Bangladesh was known then) to Assam to cultivate the vast fertile tracts of the province and increase its agricultural output.

A few thousand of these migrants settled in the Nagaon district. But over the decades since Independence, first and second-generation Muslim migrants from East Pakistan and then Bangladesh started settling down in Hojai.

The modus operandi of the Muslim immigrants followed a pattern: they infiltrated the porous and riverine India-Bangladesh border in lower Assam’s Dhubri and South Salmara districts and Barak Valley’s Cachar and Karimganj districts and initially settled down in those districts.

After obtaining documents like ration cards and getting their names into the electoral rolls, they and their descendants would move to the neighbouring districts. The first and second-generation descendants of these illegal Muslim settlers then moved to other areas of the state like Nagaon and Hojai.

Following Partition, when many Muslims returned to East Pakistan, the percentage of Muslims in Assam fell marginally, and they were 24.68 per cent of the population in 1951. Over the next three decades, the percentage of Muslims remained more or less static at below 25 per cent (the community formed 24.56 per cent of the population in 1971).

But following the formation of Bangladesh (in 1971), illegal migration into Assam saw a quantum jump, and in 1981, Muslims were 26.15 per cent of Assam’s population.

Today, eleven of Assam’s 29 districts are Muslim-majority, and in another six districts, they form more than 20 per cent of the population and are thus in a position to influence the electoral outcomes of elections there.

Assam’s crime graph has also seen an exponential and alarming climb over the decades since 1971. An overwhelming majority of those accused of crimes ranging from thefts, assaults, loots, dacoities, rapes, cheating, fraud murders, human trafficking etc., are Bangladeshi-origin Muslims.

There are many areas in these Muslim-majority districts of Assam, especially Dhubri, Barpeta, Darrang and South Salmara that are out-of-bounds for the Assam Police.

The police cannot dare to venture into vast areas (of these districts) which are populated almost entirely by Bangladeshi-origin Muslims.

These areas also remain out of the purview of the civil administration, and state administration officials concede that many of these areas are governed according to Sharia or Islamic laws.

Also, and this holds grave security implications for the country, Salafi clerics in petrodollars-funded masjids and madrassas in these areas have been radicalising young men and women.

All this has happened solely due to the active policy of minority appeasement followed by successive Congress regimes that have ruled Assam from most of the time till 2016, when the BJP-led alliance came to power in the state.

The silent but sinister demographic invasion of Assam poses a grave existential threat to the state’s indigenous people.

Tuesday’s horrific assault on a doctor in Hojai is but a minor manifestation of the larger threat that Assam is facing from the Bangladeshi-origin Muslims who hold large parts of the state to ransom today.