CAA: Do Not Buy Into Fake Media Narratives And Fear-Mongering 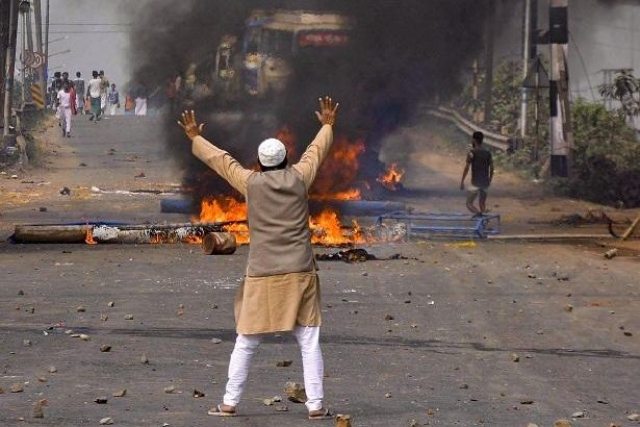 A large number of media outlets, domestically and overseas, report that India ‘is burning’ due to Citizenship Amendment Act (CAA) protests. It is important to highlight that the anti-CAA protests are due to misinformation, misunderstanding, fake news and confusion regarding the amendment. As a result, India’s image is getting tarnished both at home and abroad due to fake narratives as the chaos continues.

Having studied overseas in multiple countries, seeing inaccurate and sensationalised media reports is very disturbing. Had I been in London or Boston during this time, I may have succumbed to the overwhelming amount of misinformation as well.

Therefore, I would like to objectively answer the most common frequently asked questions on the Citizenship Amendment Act, 2019. My aim is that you read this article, get informed and counter fake narratives causing civil turbulence.

The Nehru-Liaquat pact, a bilateral treaty between India and Pakistan, safeguarded minorities. Under the treaty, minority rights were restored, refugees were allowed to return to dispose property, abducted women and stolen property were to be returned and forced conversion was un-recognised.

Additionally, minority commissions were set up in both countries. Over 1 million refugees migrated from present-day Bangladesh to India. As a result, while Indian minorities prospered, minority populations in neighbouring countries saw massive reductions. Multiple leaders across party lines have called for the CAA. It has been long-pending.

For instance, in a 2003 speech, former prime minister Manmohan Singh had said,

After Partition, minorities in countries like Bangladesh have faced persecution and it is our moral obligation that If circumstances force people these unfortunate people to seek refuge in our country, our approach to granting citizenship to these unfortunate persons should be liberal.

The CAA does just this.

2. Under which provisions does Parliament have the right to enact CAA?

Article 246 of the Indian Constitution includes three lists from the seventh schedule and articulates how Parliament has full right to enact the CAA. Point 17 from the Union List says that Parliament will have the power to make laws on “citizenship, naturalisation and aliens”.

Article 11 of the Indian Constitution gives Parliament the power to regulate the right of citizenship by law. This was the root from which The Citizenship Act of 1955 got enacted. Under this, Parliament holds complete discretion on granting citizenship to people.

The CAA, 2019 has been enacted under the same provisions.

3. Does CAA violate the right to equality? (Article 14 of the Indian Constitution)

Article 14 establishes the concept of equality before law as well as equal protection under the law. This eliminates religious discrimination.

However, there is an exception and it known as ‘reasonable classification’. Under this provision, positive discrimination is possible if the criteria for classification is reasonable. This is why caste-based reservations and special rights to minorities in India exist with Article 14 in place.

Article 14 also puts ‘intelligible differentia’ in place. ‘Intelligible differentia’ basically distinguishes between a group of people or things and those that have not been included in the group. The religiously persecuted minorities from Bangladesh, Afghanistan and Pakistan form a reasonable classification because all of them have been subject to violence and persecution due to their religion while being present in Islamic nations.

Additionally, with regards to the Ahmediyyas and Shias: these groups are victims of ethnic violence which is disparate from religious persecution from a legal standpoint. If cases of ethnic violence are included in the CAA along with religious persecution, then it would violate Article 14 because it cannot be included as ‘reasonable classification’.

4. Why just these three countries though?

For instance, why aren’t other countries like Myanmar included? Class specific laws are nothing new, not surprising to India. For instance, look at the SC and ST (Prevention of Atrocities Act) of 1989. As the name of this act suggests, only members belonging to SCs and STs are included while other backward classes (OBCs) are not included.

The Supreme Court has stated that it is unnecessary for all laws to be general in character and have universal application. By the way, this is the case in most other countries as well.

Therefore, Parliament can classify and distinguish for the purpose of constitutional legislation. In the case of the CAA, Parliament, therefore, is not liable for not providing the benefits of CAA to groups like Rohingya Muslims from Myanmar.

It is important to also note that Parliament can use its discretion to grant a relaxed window for citizenship. For example, if at a future date, Parliament feels that Rohingyas are not a threat to national security, it can enact open application for citizenship to this group subject to other laws already in place.

The detention centres you may be seeing all over media in Assam were built by the earlier Congress regime according to the 1985 Assam Accord. Furthermore, Prime Minister Narendra Modi is right in claiming that urban naxals and Congress are lying about detention centres for Muslims. The reality is that there are no detention camps for ‘Muslims’ in India. That goes for the Modi government as well as earlier regimes. As far as ‘detention-like’ camps set up, the method that is going to be used to deportation of illegal immigrants has not been finalised yet.

However, the present government of Bangladesh has stated that it is ready to accept those who are proven Bangladeshi citizens and came to India.

The United States Commission on International Religious Freedom (USCIRF) has called the CAB “deeply troubling” and recommended sanctions on Home Minister Amit Shah if the bill passed in both houses. The Ministry of External Affairs has gone on record to answer this report. It has stated the following:

It is interesting to note that this body has not shown such grave concern over persecution of religious minorities before. Yes, they have reported it, but never gone so far for calling sanctions on Indian leadership. I would like to reference a previous report of the USCIRF on Pakistan to justify this point.

A USCIRF report states that “an estimated 1000 young women are forcibly converted to Islam each year; many are kidnapped, forcibly married, and subjected to rape,” (pg. 7).

Why am I citing this? A significant portion of the report illustrates non-democratic religious discrimination in Pakistan. This sort of discrimination takes away freedom of religion and freedom of thought from people. There are multiple reports citing denial of fundamental rights.

Now why didn’t the USCIRF sensationalise this and call for sanctions on the Pakistani government after the atrocities cited in this report? Ironically, the CAA grants citizenship and rights to the same religiously persecuted minorities that were mentioned in this report. Shouldn’t USCIRF be overjoyed about CAA?

India’s Ministry of External Affairs has rightfully called the USCIRF’s claims unwarranted and inaccurate. A spokesperson has said, “It [CAA] seeks to address their [religiously persecuted minorities] current difficulties and meet their basic human rights. Such an initiative should be welcomed, not criticized by those who are genuinely committed to religious freedom.”

Bottom line: do not buy into such bodies (with agendas themselves) as the irrefutable truth without fact-checking and doing your own objective research first. Fancy fonts and elaborate presentation do not make the information presented accurate.

Misinformation and fake narratives have caused disorder and chaos in India which are still resulting in civil unrest, countless injury and deaths. It is none other than the opposition that is spreading this paranoia. They have now gone so far to link the CAA with the National Population Register and National Register of Citizens.

People from across the world have personally reached out to me on Twitter, sent me pictures of detention centres and called the CAA the beginning of the ‘othering process’. They are comparing Prime Minister Narendra Modi to Adolf Hitler. This is nothing but fear-mongering to benefit opposition’s political agenda.

What makes me really boil is that opposition, to gain a bit of political capital, is willing to watch property get damaged, see citizens get injured, lose their eyesight and die across the country.

To all people in India: yes, you do have a right to express your support or the lack of it to the CAA. Yes, you have the right to protest peacefully. But I implore you to research and make an objective viewpoint.

To the international community keeping up with India and CAA: thank you for bringing the CAA issue close to your heart. With that being said, complete text of the CAA is available in public domain. Please take the time to read it.

Do not buy into media hype that is meant to spread paranoia and an anti-Modi agenda. After reading the CAA, please educate and inform fellow members of the international community on correct and objective grounds.