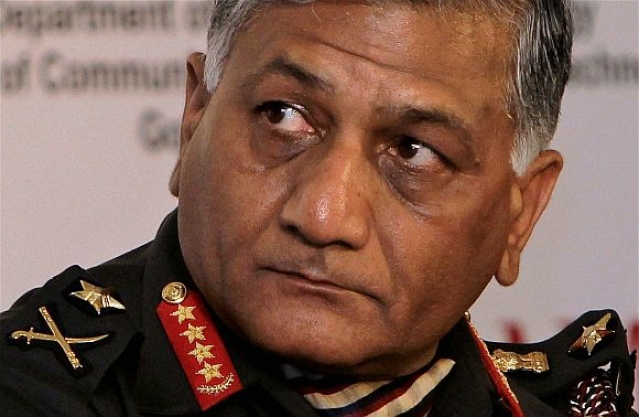 Gen VK Singh is perturbed unnecessarily, as media attacked the government, of which he was a mere representative, and not him. And that attack was legitimate.

Union Minister Gen (retd) VK Singh hash-tagged “Duty” and “Disgust” in his tweets after attending the National Day celebrations of Pakistan at its High Commission in New Delhi. This should not be taken lightly; it throws open a whole gamut of issues involved in India-Pakistan relations under the present Indian regime.

It was a “duty” that forced the general (being the MoS External Affairs) to represent the Government of India on the occasion. My sources said he had refused at the first instance to be the official representative. He had to relent under pressure since there has been a tradition of MoS External Affairs representing the country on the Pakistan Day. On it part, the government failed to appreciate the man’s nature: Once a general, always a general! You can take the general out of the army but can’t take the army out of him.

Gen Singh reportedly did not eat anything at the High Commission — and even refused water to drink — saying he was on a fast. After the national anthem of India was played, he left the venue within 10 minutes. He tweeted “#Disgust”. Was this disgust a result of being forced to share platform with the likes of Hurriyat leaders, reminding him of the fight of the army against such disruptive forces? It was. He was clearly uncomfortable. The media had by then started projecting the visit as a compromise.

But the expression of disgust was more against the media that he thought was not being fair to him. That he was merely doing a duty was not appreciated. Hurriyat leaders attend Pakistan’s National Day celebrations on a regular basis. Why did the media not make an issue out of United Progressive Alliance (UPA) government’s MoS attending such functions? His tweet described “disgust” as “To offend the moral sense, principles, or taste of”. An hour before that, he had tweeted, “#Disgust’ed to see how certain sections of the media are twisting this issue.”

But the general took it to the heart. The criticism, if any, was not against him. People understand that he was merely performing a duty assigned to him. Why did the media not appreciate this? For the simple reason that there was no explanation why the government that cancelled foreign secretary-level talks between India and Pakistan in August 2014  allowed yesterday’s Hurriyat meeting. Last year, what looked like Hurriyat ‘sharing the stage’ with Pakistan’s representative was taken for interference in India’s internal affairs. People had lauded the move of the new Prime Minister and this was considered a way to keep Pakistan in check. The new stance was lauded in the country with the hope that New Delhi would get an independent and fresh direction under Narendra Modi.

To most people in India, Pakistan does not matter. They are confident that the strong Indian Army is capable of keeping Jammu & Kashmir safe and secure. It is foolish to give the arch enemy the leeway and lose the advantage gained after the meeting was first cancelled. There is no explanation. To describe this as a social occasion would cut no ice. The media was questioning this, Gen Singh, and not you.

Did the PDP pressure the BJP to keep the Hurriyat in good humour, which would, Mufti’s party believed, help in resolution of the Kashmir conflict? Did the central government desist from objecting to the Hurriyat leaders’ presence at the High Commission for that reason?

Diplomacy may demand that you become hard and then soft alternately to make room for negotiations, but the technique is not prescribed when the other side is thoroughly exposed as anti-India, separatist and championing a resolution outside the purview of the Indian constitution. Giving respectability to these monsters and increase their strengths, and then using all our might to finish them makes no sense.

This new government, which is not fresh anymore, must act differently.