Case Study: In Discourse Around Illegal Meat Trade, A Voice That’s Routinely Drowned Out Is Of Dissenting Muslims 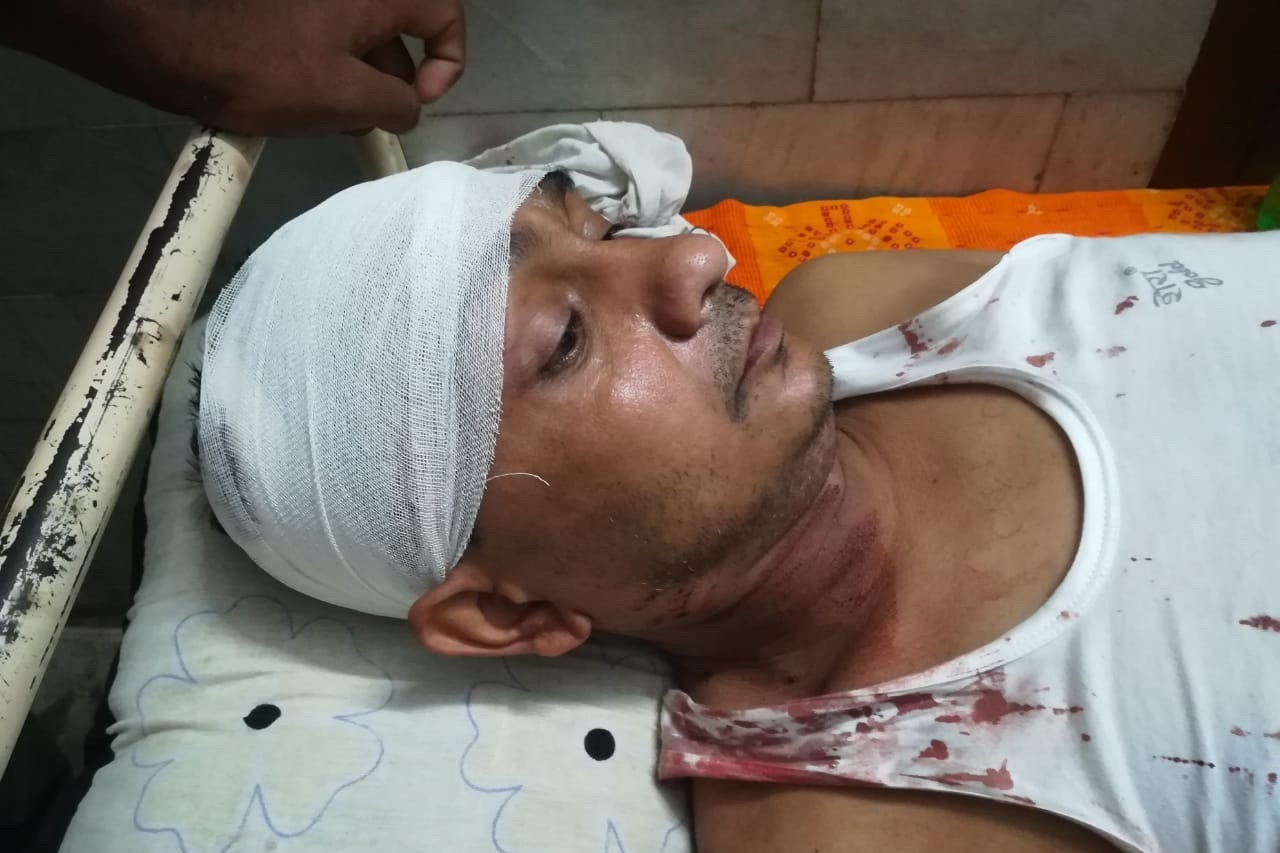 Mohammad Afroz Khan, who was allegedly assaulted by some butchers in his colony on 14 May

As meat trade in India primarily involves the Muslim community, the discourse around it has always been politicised.

Any attempt at a crackdown on illegally operating slaughterhouses and meat shops is panned in the left-wing media and decried as a move against Muslims.

We saw it in 2017 when the newly formed Uttar Pradesh government led by Yogi Adityanath, in an unprecedented move, announced that all illegal slaughterhouses and meat shops would be shut down.

The decision was met with vehement opposition. A Muslim political leader described it as “an excess against minorities”. No other state has dared a similar step.

As this correspondent has earlier shown through ground reports, voices from within the Muslim community welcoming Adityanath’s decision were completely drowned out in the discourse.

This is despite the glaring fact that such illegal set-ups are central to the woes of a host of residents staying near them. Those living in the vicinity of such meat units - including Muslims - say the units have been wreaking havoc on their health and environment.

Read our reports here and here.

Here’s a fresh case that shows how Muslims objecting to such illegal meat units get a raw deal, both from the media as well as the administration:

Residents of a residential colony in Bettiah town of Bihar’s West Champaran district have written to the district police chief complaining that they have been informing the local police about illegal cow slaughter and sale of meat in their colony for five years, but their grievances are not being addressed.

This has come after a resident named Mohammad Afroz Khan was allegedly beaten up by butchers in the colony for objecting to the illegal activity.

In a written statement given to the police (image attached below), Afroz has said that eight persons who had slaughtered a cow and were selling its meat attacked him with a motive of murder, around 10 pm on 14 May.

Afroz’s younger brother Akhlaq told this corespondent over the phone that Afroz is recovering in a hospital and is too weak to talk. “We got the CT scan done only today,” he said. “I will share the photographs of his injuries with you. See it for yourself.”

Photos show Afroz heavily bandaged on the head with stains of blood on his neck and vest. 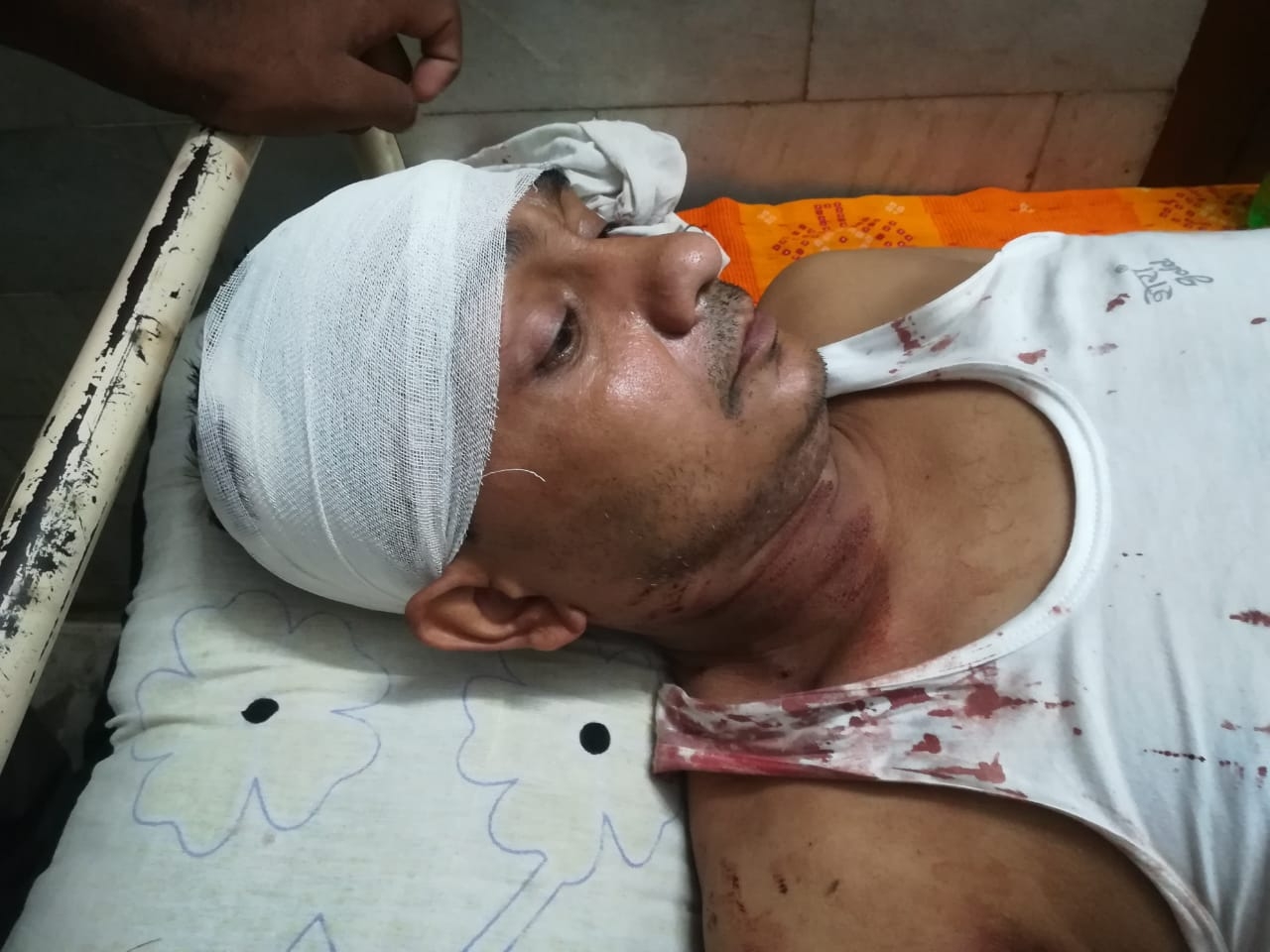 Afroz’s statement says that when he confronted the group, his neighbour Pappu handed over his butcher’s knife to one Sohail alias ‘tamatar’ and told him to kill Afroz, after which Sohail hit Afroz on the head.

When Afroz’s wife, Hazra Khatoon, came running from the house to his rescue, the attackers tried to undress her and molested her. In the process, they snatched her gold chain and earrings.

The attackers fled the place after some neighbours gathered hearing a commotion, the statement says.

It further says that the residents have informed the police several times about the illegal slaughter and sale of meat in the past, but to no avail.

The activities have often led to communal tension, the statement says. 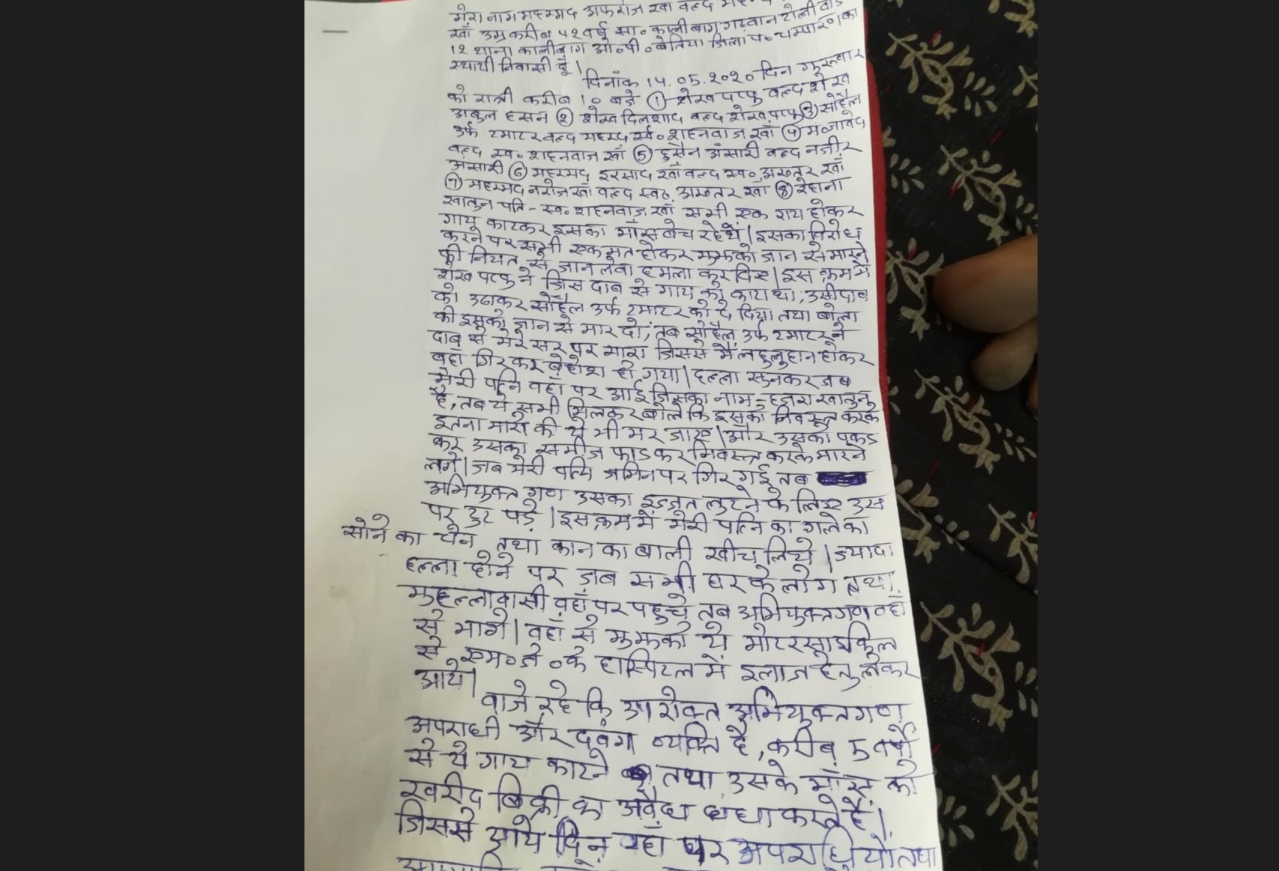 After the incident, 23 residents of the colony have given a signed letter to the West Champaran police chief (a cropped image of the letter is attached below).

The subject of the letter (as translated from Hindi) says: “Regarding cow slaughter and its sale in the open, and potential communal violence that could break out because of it”.

The letter says that the signatories are permanent residents of Mohalla Kalibagh, Ward number 12 and 13. It says that some residents have formed a group and begun to park their carts on the main road. This hinders easy movement of residents. The group openly slaughters cows in the colony and throws the blood, excreta and meat and bone pieces into the drain.

The letter further says that this results in stench and diseases. No government official enters the area, including sanitary workers. Even the plumbers avoid the colony. Women find it particularly tough to step out of the house.

The letter says that the residents have organised panchayat discussions several times in the past, but the law violators refuse to obey the decision of the Panchayat and, instead, boast about their connections in the administration.

Whenever residents have protested, the group gets down to violence and threatens to kill them, the letter says. 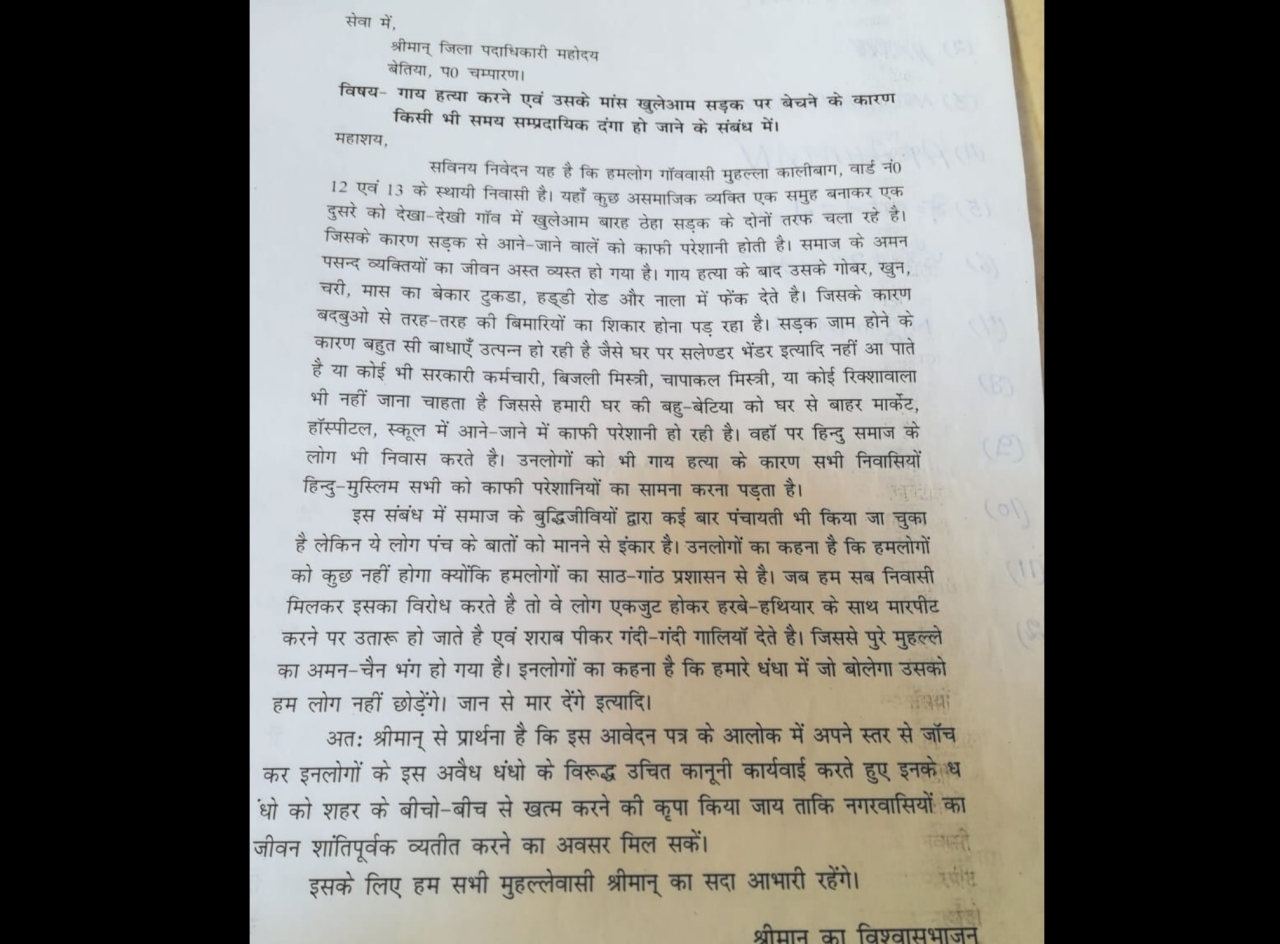 It’s signed by 23 residents; majority of them are Muslims, including Afroz’s brother Akhlaq.

Akhlaq showed a live video to this correspondent of the dirt and filth in the streets on 16 May, and shares several recorded videos and photographs. One of the images showed a freshly slaughtered cow; one of the videos showed a dog feeding on the meat.

“We want to live a peaceful life. We want clean surroundings. Is it too much to ask for? Whenever we complain, the police come, take a round and leave. They never take any action against the group,” says Akhlaq.

He says that an average of three cows are slaughtered in the colony every day; the number crosses 20 on Fridays. “People gather in hundreds to buy the meat. We cited lockdown and Corona to the police as an excuse for a crackdown, but they have not done anything,” he says.

“A slaughtered cow fetches Rs 6,000-Rs 7,000. So you can imagine the kind of money the group has to shut us down,” says Akhlaq. “When they kill a cow, there is so much blood that it can fill three buckets. All that is poured in the streets.”

“Please save us. Help our voice reach the chief minister,” Akhtar said. “We live in hell”

He added that as of now, the residents have sent their appeal to the police chief on WhatsApp and social media but after the lockdown, they would meet the officer in person. 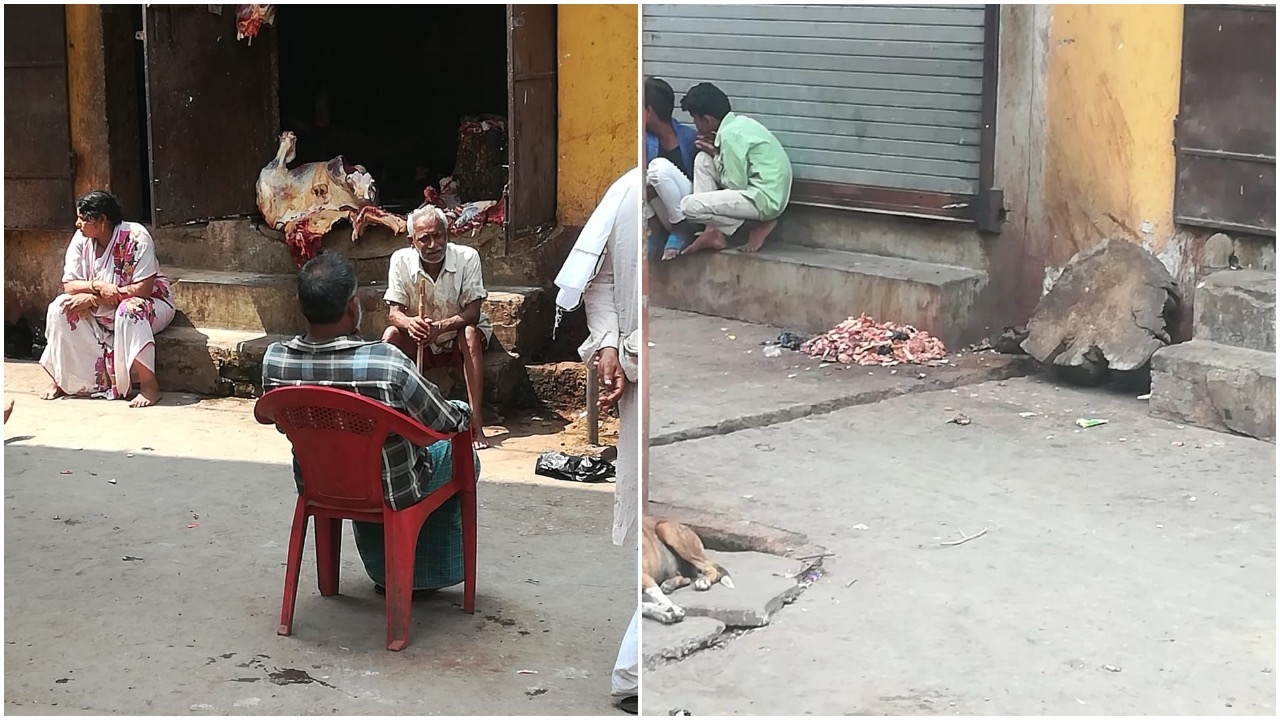 This correspondent did not receive a clear response from the police. Manish Kumar, in-charge of Kalibagh police outpost, said that he was aware of the matter, but details were available only with the Bettiah town police. He also said that “people from both sides had sustained injuries”. However, he declined to elaborate.

When this correspondent called up Bettiah town police using the number given by Manish Kumar, a cop, who refused to share his name, said he did not have the details and only Kalibagh police outpost in-charge could give them. When told that I have been re-directed to him by the same in-charge, the cop said that no FIR had been filed as no complaint had been given to the police. “The complaint that you probably have with you is the victim’s statement to the police in hospital. That doesn’t qualify as a complaint to the police. Investigation is still on,” he said and disconnected the call. (This correspondent has the recordings of both the conversations).

When told about the police response, Akhlaq said the cops are shielding the accused. “They told us on our face that they can‘t act against the group as the latter would accuse them of ‘one-sided action’,” said Akhlaq. “They are giving all sorts of excuses.“ 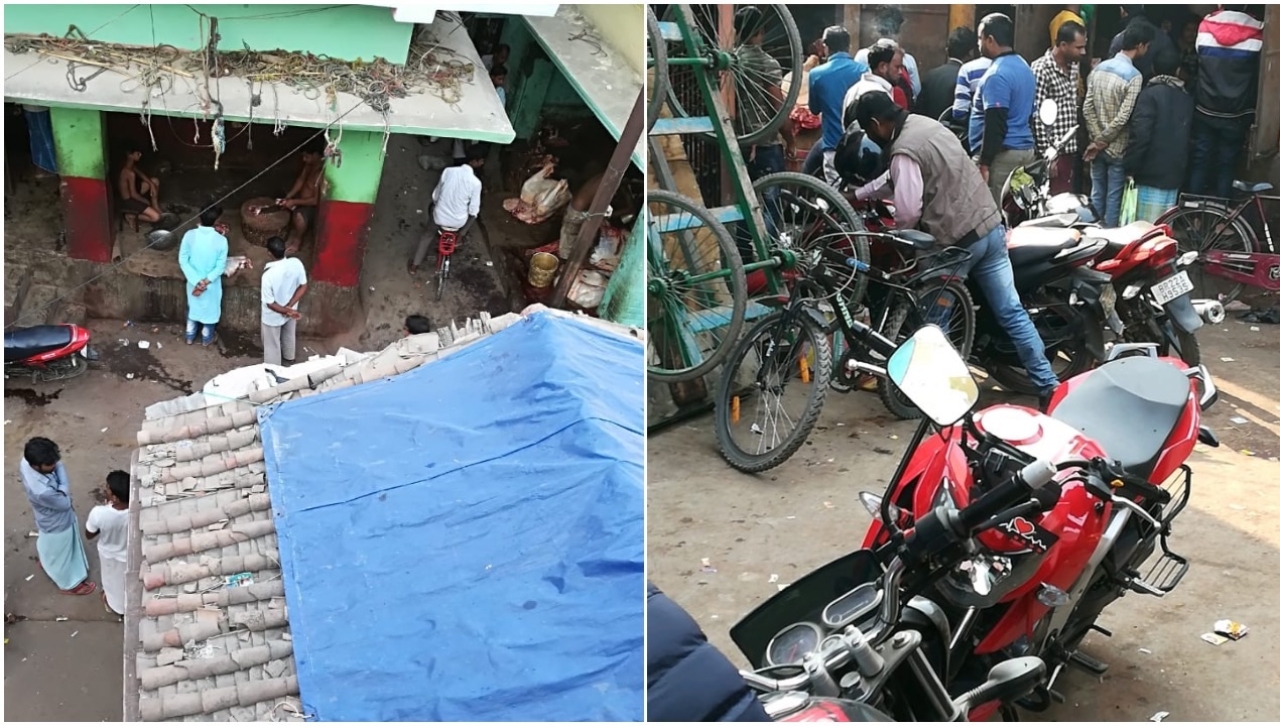 Some more photos sent by Akhlaq

This case not only further establishes that voices of dissent among the Muslim community, against illegal meat business, are drowned and suppressed by the media, the adminsituation and the powerful in the same community, but it also shows that the so-called stringent ban in Bihar on cow slaughter is a joke.

Bihar has a law against cow slaughter since the 1950s.

Shubham Bhardwaj, state co-convener of north Bihar for the Hindu outfit Bajrang Dal, told this correspondent that the organisation would help the voices of the residents reach the highest authorities in the state.

In 2017, some newspapers had reported that Bihar was considering a crackdown similar to the one initiated by Yogi Adityanath in UP.

At that time, The Times of India reported that as per state animal husbandry officials, only one or two slaughterhouses were registered with the urban local body out of the 144 identified.

Bhardwaj however said that the figure of 144 is too conservative to be believed.

Get Swarajya in your inbox everyday. Subscribe here.
Tags:
467 Shares