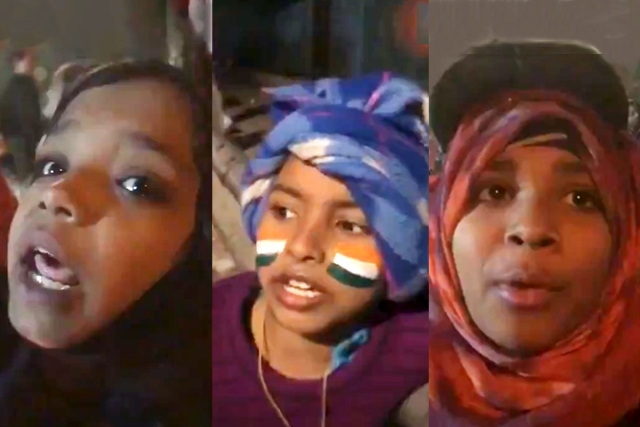 Three kids who were present at the Shaheen Bagh protest. (KnowYourNation/Twitter)

The National Commission for Protection of Child Rights (NCPCR) has written to the district magistrate (DM) of South East Delhi to arrange for counselling sessions for children participating in the ongoing protests at Shaheen Bagh against the Citizenship Amendment Act (CAA).

In its letter (accessed by Swarajya), the NCPCR has mentioned that it has taken cognisance of a complaint made to the commission regarding statements by some children on the CAA and the National Register of Citizens (NCR) seen in viral videos.

“As per the complaint, ‘these children are shouting that their elders have told them that Prime Minister and Home Minister of India will ask them to produce documents of citizenship and if they fail to produce, they will be sent to detention centres where they will not be allowed even food and clothing,” says the letter.

“It appears that these children might be brought under influences of rumours/miscommunication and as a result of which, these children may suffer from mental trauma,” the letter further says.

In the letter, the NCPCR has asked the DM to issue necessary directions to the District Child Protection Officer along with Police Child Welfare Officer or Special Juvenile Police Units to “identify these children and arrange counselling sessions for them and also for their parents, if deemed fit”.

“If required, children may be produced before the CWC [Child Welfare Committee] also,” the letter says.

The commission has also sought a report from the DM in 10 days.

An official from the commission told Swarajya that the complaint had been made through email by an individual. The official, however, said that no videos were attached with the complaint. “There are plenty of such videos available on social media and YouTube. We have seen many ourselves,” the official said.

NCPCR chairman Priyanka Kanoongo told Swarajya, “It’s against the law if children are made to go through any mental trauma. The commision’s priority is to get the children out of this fear and trauma.”

It’s pertinent to note that some news publications have reported about children at the Shaheen Bagh protest making shocking statements.

In a 16 January report, Republicworld.com said that a girl at the protest stated that the National Registrar of Citizens (NRC) is aimed at killing Muslims and putting them in detention camps, and the protesters would kill Narendra Modi and Amit Shah.

The report quoted the girl as saying,

We are here to save our country. We are going to stay here unless and until PM Modi rolls back CAA and NRC. No matter what happens let Modi behead us or call the cops on us, we are not leaving. We will take back our freedom (Azadi). NRC is going to kill us and put us in detention camps. They (government) won’t even let us wear proper clothes or provide us with food. So unless the NRC is rolled back we are going to stay here. Modi had earlier sent personnel and they were telling us to leave the place but we all refused to do so. This Amit Shah and Modi are thinking that they’ll kill all the Muslims in the country and live alone here. But we won’t let them live alone we will kill both of them. The way they are troubling the Muslims here we will also trouble them the same. We will kill both of them.”

“Clearly, the child has been brainwashed in such a manner that tremendous fear and untruths have been planted in their minds over CAA and NRC,” the report said.

A Twitter handle by the name @knowthenation posted three videos of children at the protest last week that went viral.

"We'll not be allowed to wear clothes. We'll be given food only once a day at the detention camps" says this girl at #ShahinBaghProtest

"Families will be split up at detention camps. Our clothing & food will be snatched too!" says this girl at #ShaheenBaghProtests

In the above video, the child is seen saying that the protesters will stop at nothing but ‘azadi’. “Modi has problems with Muslims. Modi wants to drive out Muslims, but everyone is now realising that this country belongs to every one and not Modi’s father...Modi is asking us for proof and if we don’t snow, he will put us in detention camps...”

In the above video, the child is seen saying, “We are here to take ‘azadi’ from Modi. Modi is doing all this. He is getting throats of men slit and getting children killed. I saw it on TV...”