Child Commission Takes Note Of Appeal By Swarajya Journalist, Rescues Minor Girl Who Was Missing For A Month 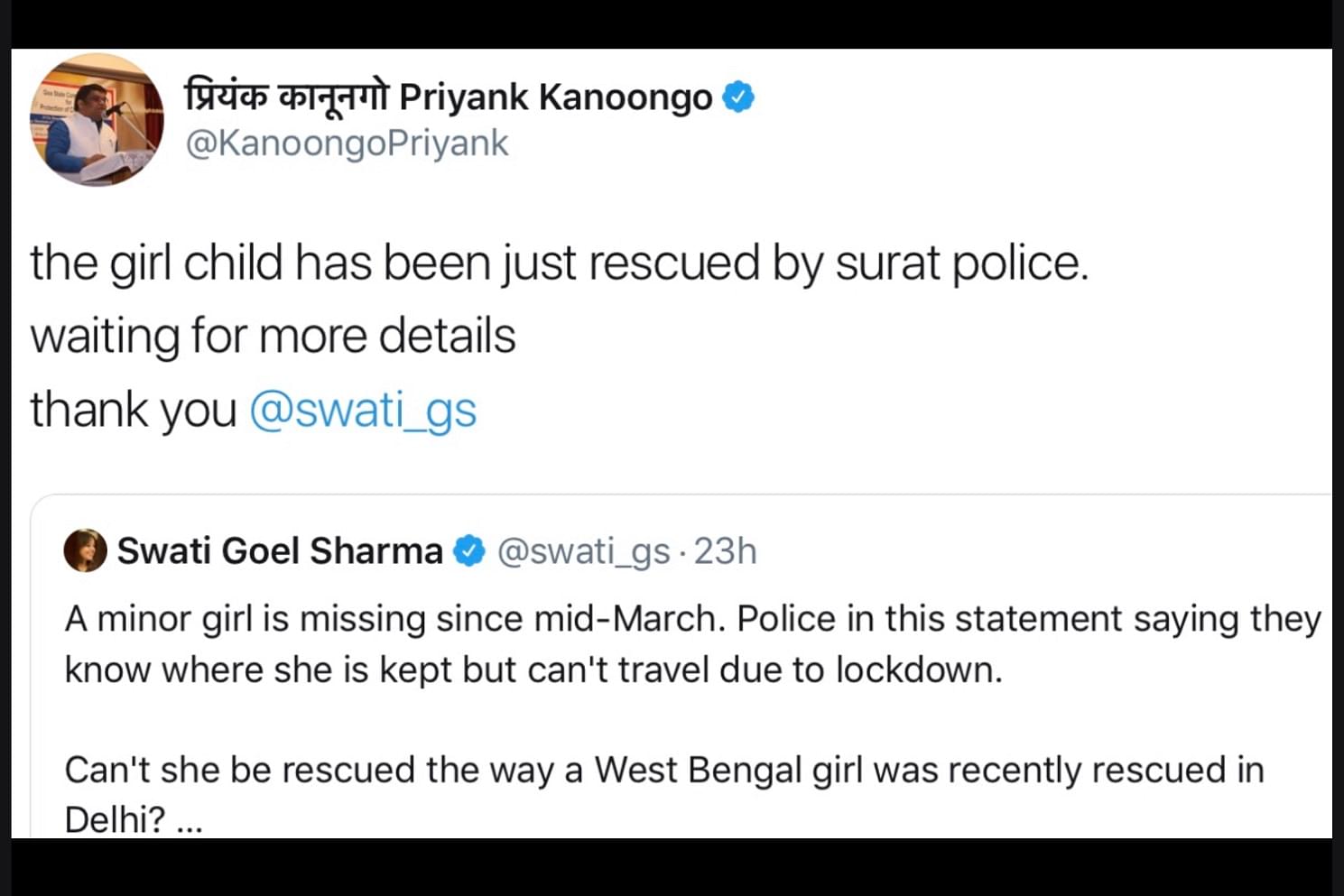 A minor girl from Uttar Pradesh who had been missing for more than a month was finally rescued on 9 May when the National Commission for Protection of Child Rights (NCPCR) intervened.

The NCPCR took notice of the case after a Swarajya journalist posted about it on Twitter on 9 May.

The 15-year-old girl, hailing from Bhadohi district of UP, went missing in mid-March.

As per some Hindi media reports, the girl’s mother and aunt went on a dharna, demanding the police to act, but the police kept on giving ‘lockdown’ as an excuse for their inaction.

On 8 May, the official handle of the Bhadohi police tweeted a video statement, in which a police officer was seen telling some news channels that the police had traced the girl’s location but were unable to bring her back due to ‘lockdown’.

“The girl’s mother and aunt who are sitting on the dharna have met me several times. We have traced the girl. The case is very sensitive. We explained to them that a lockdown is in place and the rescue would require the police to travel very far. The conditions are such that the police cannot go there. As soon as the lockdown ends, we will immediately bring the girl back...,” the cop was seen saying.

Reacting to the post, Swarajya journalist Swati Goel Sharma tagged NCPCR on 9 May, asking if the missing minor can be rescued the way a West Bengal girl, who was similarly kidnapped before lockdown, was rescued in New Delhi in April after the intervention of the NCPCR.

A minor girl is missing since mid-March. Police in this statement saying they know where she is kept but can't travel due to lockdown.

Can't she be rescued the way a West Bengal girl was recently rescued in Delhi?
Kind attention: @KanoongoPriyank @NCPCR_ https://t.co/YuOMXCKL4f

Read the case here: How Lockdown Saved A Minor Dalit Girl From West Bengal From Being Trafficked

Late in the evening, the chairman of NCPCR, Priyank Kanoongo, informed on Twitter that the girl has been rescued by the Surat police. The chairman also thanked the Swarajya journalist.

the girl child has been just rescued by surat police.
waiting for more details
thank you @swati_gs https://t.co/ecVR8Sai5m

More details on the case and the rescue are awaited.

It is pertinent to mention here that chairman of NCPCR Priyank Kanoongo recently told Swarajya that unless trafficking is handled by a central agency, such as the CBI, it cannot be tackled.

“When CBI was formed, trafficking was one of its focus areas. Now, state governments have limited their powers in states, and trafficking has gone up,” he told Swarajya, while commenting on the West Bengal case.