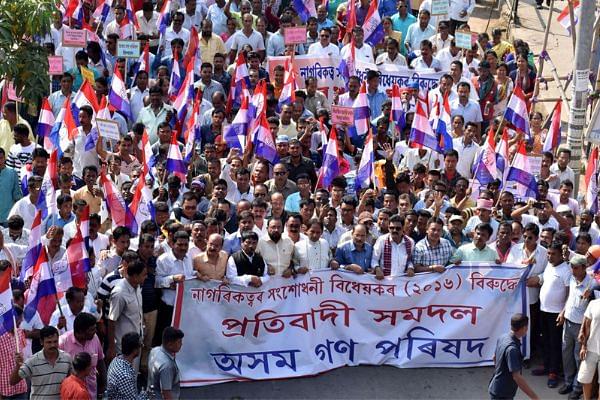 Members of Asom Gana Parishad take out a protest rally against the Centre’s bid to pass the Citizenship (Amendment) Bill, 2016, in Guwahati. (Rajib Jyoti Sarma/Hindustan Times via GettyImages)

For the first time ever, the entire northeast India shut down on Tuesday (8 January) in protest against the Union government. Tuesday’s bandh call, given by the North East Students’ Organisation (an umbrella body of influential students’ bodies of the seven states), evoked very good and spontaneous response and the bandh was a complete success.

Though cases of violence were reported from different parts of Assam and Tripura, the spontaneous, widespread and fervid response to the bandh called in protest against the Citizenship (Amendment) Bill 2016 (which was passed by the Lok Sabha on Tuesday) should worry the Bharatiya Janata Party (BJP).

There is widespread anger and disappointment with the BJP in the entire region, and more so in Assam, over the National Democratic Alliance government pushing through the bill and ignoring the sentiments of the people of the region. The BJP had won 60 seats (out of 126) in the 2016 assembly polls in Assam and, along with the Asom Gana Parishad (AGP) which won 14 seats and the Bodoland People's Front (BPF) which won 12 seats, formed the government in the state.

During the high-voltage election campaign, the BJP had promised to detect and deport all illegal immigrants from Bangladesh staying in Assam. The Citizenship Bill is being viewed in the region as a negation of that promise and a volte-face by the BJP.

That is because the bill (which will become an act once it passes the Rajya Sabha hurdle) will legalise the presence of an estimated 9 lakh Bengali Hindus who entered Assam illegally from Bangladesh between between 1971 and 2013.

Under the Assam Accord, all those who entered the state after 24 March 1971, would be deemed to be foreigners. But the Citizenship (Amendment) Bill says that all those (Hindus, Sikhs, Buddhists, Jains, Christians and Parsis) who entered India (from Bangladesh, Pakistan and Afghanistan) till six years back would become citizens of India.

Assam has borne the burden of millions of migrants from Bangladesh (and erstwhile East Pakistan) since 1947. Even before that, thanks to the British policy of settling Muslim peasants from East Bengal in Assam, the state’s demography had changed. Some Muslim rulers of Assam during the British days, like Muhammad Saadullah, sinisterly encouraged lakhs of Muslims from over-populated East Bengal to migrate and settle down in Assam in order to increase the Muslim population in the state.

Post-Independence, successive Congress regimes also encouraged this illegal immigration of Muslims from East Pakistan and then Bangladesh to create minority vote banks that helped the party cling on to power in Assam. Many of these illegal Bangladeshi immigrants (IBIs) have infiltrated into the other states of the region from Assam, whose demography has been irreversibly changed.

The presence of millions of IBIs in Assam is a highly emotive issue for the indigenous people of the state. It is estimated that Muslims now form 35 per cent of the population of Assam, up from 24.3 per cent in 1951. Eleven of Assam’s 33 districts have become Muslim-majority districts and as many as 30 of the 126 assembly constituencies of the state are Muslim-majority ones.

In 1951, just four districts of Assam and according to the 1972 electoral rolls, just 15 (of 126) assembly constituencies were Muslim-majority ones while in five other constituencies, Muslims formed over 40 per cent of the population. At the same time, the percentage of the state’s indigenous population has gone down steadily and is now estimated to be around 45 per cent.

It is the fear of becoming a hopeless minority in Assam that sparked the six-year-long anti-foreigners’ Assam Movement (read this) that demanded detection and deportation of foreigners (IBIs) from the state. The genesis of the movement lay in the revision of electoral rolls of a Lok Sabha seat (Mangaldoi) that fell vacant when its sitting MP Hiralal Patwary (of the Janata Party) died in 1978.

The updated electoral rolls showed a steep increase in the number of voters, most of them being Muslims of suspected Bangladeshi origin. This triggered the Assam movement that rocked the state for six long years. The agitation ended with the Assam Accord which laid 24 March 1971 as the cut-off date for detection of foreigners in the state.

Now that the Citizenship Bill seeks to set a new cut off date (January 2013 if the bill is enacted this month) for Bengali Hindus, the Assamese have risen in protest. The estimated 9 lakh Bengali Hindus who have entered Assam between 1971 and 2013 will become Indian citizens. In Mizoram, too, about 10,000 Chakmas (Buddhists) who have fled persecution in Bangladesh will become Indian citizens.

The others states - Nagaland, Arunachal Pradesh and Meghalaya - will not be affected by the enactment of the bill since the number of Bengali Hindus who fled Bangladesh and settled down in these states after 1951 (the cut-off year as per the Citizenship Act of 1955) is negligible and even the Bengali Hindus residing in these states are so few in numbers that they do not pose any threat to the indigenous populations there. But such is the fear generated over the presence of Bangladeshis in the region that the entire northeast observed a bandh over the issue on Tuesday.

The success of Tuesday’s bandh represents a dismal failure of the BJP to convince the people of the other states (excluding Assam) that the bill presents no danger to the indigenous people of those states. The BJP should have foreseen the opposition to the bill since it had been brewing ever since the bill was referred to the Joint Parliamentary Committee (JPC).

The JPC visited the region and received representations from all northeastern states. The Mizoram and Meghalaya assemblies even passed resolutions opposing the bill. To have sat silent and not communicated to the tribals of the region that the bill poses no danger to them was an inexplicable failure on the part of the BJP.

The last-minute announcement about the constitution of a high-level committee to implement Clause 6 of the Assam Accord (it promises “Constitutional, legislative and administrative safeguards to protect, preserve and promote the cultural, social, linguistic identity and heritage of the Assamese people”) by the NDA government was seen as an opportunistic sop to placate the agitated people of Assam. This could have come done much earlier and the fact that it was done at the eleventh hour (the decision was taken at a cabinet meeting chaired by Prime Minister Narendra Modi on 2 January) smacked of opportunism.

The announcement by Home Minister Rajnath Singh on Tuesday that a bill to grant Scheduled Tribe (ST) status to six communities of Assam would be introduced soon is also being seen as an opportunistic move devoid of any seriousness.

The demand to grant ST status to Ahoms, Mataks, Morans, Chutias, Koch-Rajbongshis and the tea tribes (adivasis) has been a long-standing one and many committees had been formed to examine the demand. This announcement could have been made at least a month ago and here too, the eleventh-hour move makes it highly suspect.

Rajnath Singh also sought to assure the Assamese from the floor of the Lok Sabha on Tuesday that Assam will not be asked to bear the burden of hosting the Bengali Hindus who would be granted Indian citizenship once the Citizenship Bill is enacted. But this verbal assurance has no takers.

The All Assam Students’ Union (AASU) has termed the assurance as “puerile” and “specious”. The Asom Gana Parishad (AGP) which broke ties with the BJP on Monday wondered why a clause was not inserted in thebBill stating that all those who would become Indian citizens (with the enactment of the bill) would be resettled in other parts of the country.

The BJP, by remaining adamant on not inserting such clauses to safeguard the interests of the Assamese and indigenous people of the state and the region in the bill, has lost a lot of political ground in the North East. The exit of the AGP from the ruling alliance in Assam - though it won’t bring down the government - is a big political and moral blow to the BJP. With the crucial Lok Sabha elections around the corner, BJP president Amit Shah’s target of winning 21 seats from the region now seems to be at risk.

“It is too late now to talk about talking to people of Assam and listening to our grievances. We all made representations to the JPC, but none of those were considered by the JPC. The BJP was also aware of the representations made by the people and organisations of Assam and the North East. Why was thebBill then not suitably amended to address the concerns and grievances of the people of the state. Assurances like the one made by Rajnath Singh are hollow and lack credibility,” said an AGP spokesperson.

“After being betrayed by the Congress all these decades, we had thought that the BJP would be serious in protecting us from the demographic invasion we face. But the BJP has also betrayed us. We are extremely disappointed and this betrayal of the trust and faith we placed on the BJP makes us sad and angry. This is going to cost the BJP dear,” said Gauhati University professor and well-regarded academic, Dhrubajyoti Deka. He articulated a feeling that is widespread in Assam today.

The BJP committed some grave errors while pushing through the Citizenship (Amendment) Bill. It should have either kept the entire North East out of the purview of the bill, or inserted a clause that all those illegal immigrants residing in the region who become Indian citizens after the enactment of the bill will be relocated to other states. And the announcements about the implementation of Clause 6 of the Assam Accord and granting ST status to the six communities in Assam should have been made much earlier.