Citizenship Bill Could Make BJP Pay In The North East 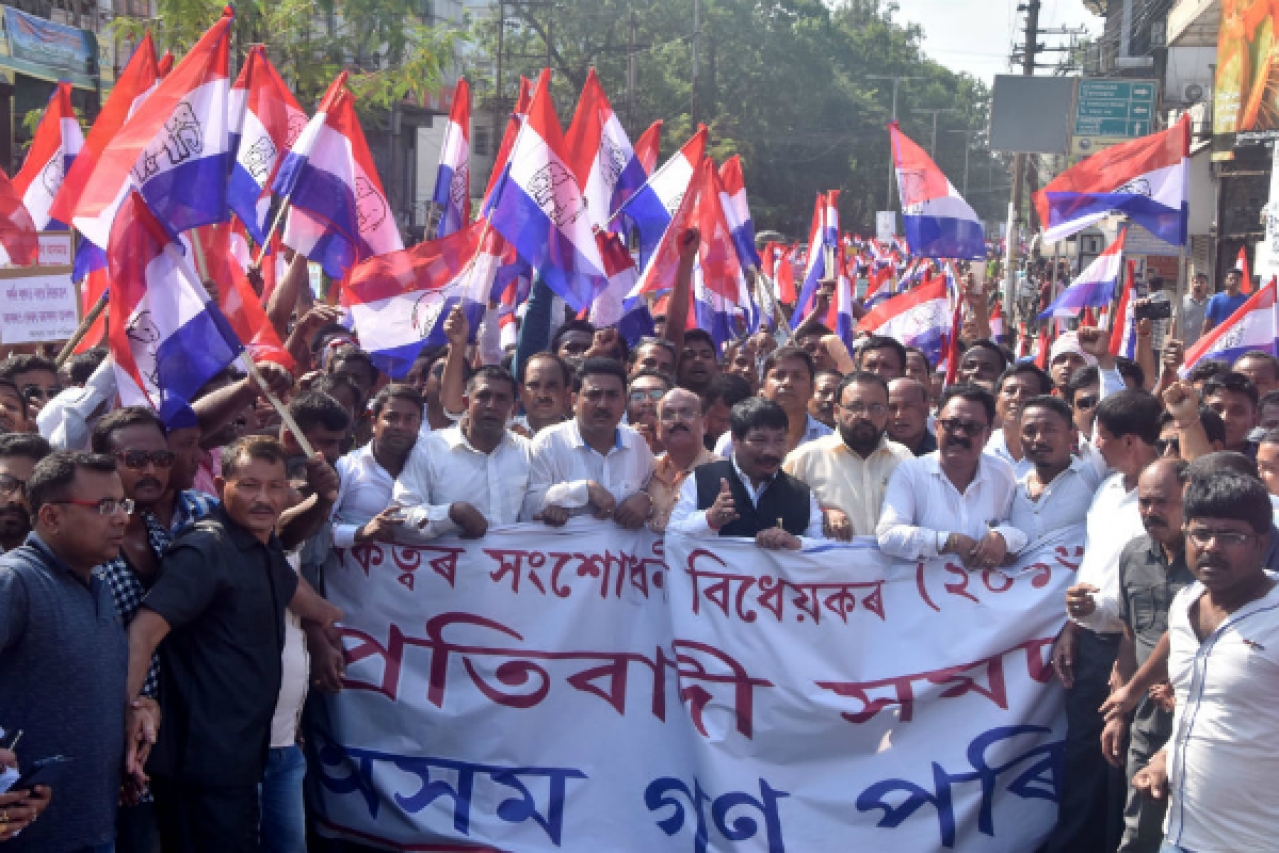 Members of Asom Gana Parishad had taken out a protest rally in Guwahati in October last year against the centre’s bid to pass the Citizenship (Amendment) Bill. (Rajib Jyoti Sarma/Hindustan Times via Getty Images)

The Bharatiya Janata Party (BJP) in the North East continues to be racked by painful spasms induced by the Citizenship (Amendment) Bill. The party suffered embarrassment when two more of its legislators in Assam spoke out against the Bill which was passed by Lok Sabha but is yet to be introduced in Rajya Sabha.

Earlier, Assam Speaker Hitendra Nath Goswami had criticised the “haste” with which the Bill was passed in Lok Sabha ignoring the sentiments of the people of the region.

At least six party legislators from Assam have voiced their opposition to the Bill, prompting the party central leadership to launch a damage-control exercise. BJP national general secretary Ram Madhav, who is also the party’s minder for the region, reached Guwahati to speak to state party leaders and the members of the BJP-partnered North East Democratic Alliance (NEDA). The BJP units in Meghalaya, Nagaland, Manipur, Mizoram, and Arunachal Pradesh have strongly opposed the Bill.

The BJP is staring at a bleak situation where the NEDA disintegrates and maybe even its governments in Assam and Manipur collapse if the Citizenship Bill becomes an Act after being passed in Rajya Sabha in its present form. The Asom Gana Parishad (AGP), an alliance partner of the BJP in Assam, has already separated itself from the national party, and three of its ministers have also put in their papers.

A number of organisations, including the powerful All Assam Students’ Union (AASU), have launched agitations, with the entire region observing its first-ever total shutdown on 8 January on a bandh called by the North East Students' Organisation (NESO).

The just-concluded Magh Bihu celebrations have resulted in a temporary lull, but the popular stir against the Bill in Assam is expected to pick up from next week. And the spillover to the rest of the region may be serious.

The damage-control exercise by the BJP leadership may have come a bit too late. For now, BJP legislators and functionaries in Assam have been advised against opposing the Bill in public. But that is hardly going to put a lid on the acute discontent within the BJP ranks in the region.

BJP leaders in Assam apprehend that the stir against the Bill may gain critical mass and even spiral out of control. “That will result in intense public pressure building up on us and we may no longer be able to keep quiet. I can easily foresee a situation where many (including MLAs) are forced to quit the party under public pressure,” said a BJP Member of Legislative Assembly (MLA) from Upper Assam, who did not want to be named.

Manipur Chief Minister N Biren Singh (of the BJP) has made it clear that his government would oppose the Citizenship Bill till the President (on the advice of the Union government) signs the Manipur Peoples (Protection) Bill 2018 that was passed by the state assembly last year. Mizoram and Meghalaya Legislative Assemblies have already passed unanimous resolutions against the Citizenship Bill. The Nagaland government (the BJP is a minor partner in it) has also opposed the Bill, as has the BJP government in Arunachal Pradesh.

Former Arunachal chief minister Gegong Apang, who held office for 25 years and was in the Congress before joining the BJP in 2014 (before the last assembly polls in the state), resigned from the saffron party earlier this week. There have been a number of other desertions from the BJP in the recent past in other states of the region as well.

The trickle of desertions could become a flood if the BJP persists with the Bill in its present form.

The central BJP leadership had earlier tried to calm tempers in Assam by announcing Scheduled Tribe status to six communities in the state and implementation of Clause 6 of Assam Accord that would give reservation in elected bodies, jobs, and educational institutions to the indigenous people of the state. But these were rejected as “last-minute insincere sops”.

The Union government was also embarrassed when most members and the chairman named to the panel (to recommend steps to implement Clause 6 of the Assam Accord) refused to be part of the panel. It was widely felt that these two announcements should have been made much before the Citizenship Amendment Bill was introduced and passed in Lok Sabha.

The BJP central leadership feels that there is a concerted “misinformation campaign” against the Bill. Madhav clarified to the media in Guwahati on Thursday (17 January) that the interests of the indigenous people of the North East would be safeguarded. He is learnt to have spoken to party legislators and is also reaching out to the AGP and other constituents of the NEDA in the region.

It is also learnt that the central BJP leadership will get in touch with chief ministers and prominent leaders of the region over the next two weeks to clear the air on the Citizenship Bill. Madhav has expressed hope that the AGP will rejoin the alliance with the BJP.

But a senior Assam BJP leader has admitted that the saffron party should have launched a campaign to explain the Citizenship Amendment Bill to the people of the region many months ago. Also, the BJP’s partners (NEDA constituents) in the region should have been taken into confidence, and the party leadership should have reached out to leaders of the BJP’s alliance partners in the region individually and collectively to get them on board over the Bill. That the BJP did not do so is indicative of the failure of the party to gauge the mood of the people of the region.

However, it is still not too late to douse the fires lit in the region by the passage of the Citizenship Bill in Lok Sabha. An announcement can be made that the Bill will be amended to keep the North East out of its purview. This would immediately silence all opposition to the Bill from this region.

As for the estimated eight lakh Bengali Hindus who have fled Bangladesh and infiltrated into Assam between 24 March 1971 (the cut-off date for determining citizenship under the Assam Accord) and 31 December 2014 (the cut-off date as per the Citizenship Bill), the Union government can always take concrete measures to resettle them in other parts of the country. Assam has already borne the burden of millions of settlers from erstwhile East Bengal (that became East Pakistan and, later, Bangladesh) and should not have to bear any more of this burden.

Along with this, the Union government should announce some measures with all sincerity to protect the indigenous people of the rest of the region. Till the passage of the Bill in Lok Sabha, the North East was experiencing a rare period of peace after decades of militancy-triggered convulsions. To jeopardize this peace and push the region into chaos and unrest once again would be foolhardy, and would wipe the BJP away from the region for a long time to come.