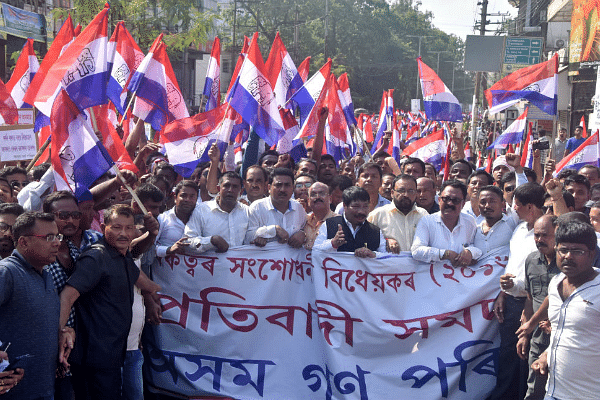 Members of Asom Gana Parishad at a protest rally in Guwahati against the Centre’s bid to pass the CAB. (Rajib Jyoti Sarma/Hindustan Times via GettyImages)

The Citizenship Amendment Bill (CAB) that the Bharatiya Janata Party (BJP) has repeatedly promised was cleared by the Union cabinet today (4 December). Its passage in Parliament is not preordained, since many opposition parties are determined to scuttle it.

The bill seeks to fast-track citizenship to persecuted minorities from Bangladesh, Pakistan and Afghanistan who are illegal migrants in India. It faces opposition in the North-East, where there are concerns that demography may be changed by allowing illegal migrants to gain citizenship. The bill is also opposed by the 'secular' lobby for excluding Muslims from its ambit. The intention is to limit citizenship only to persecuted minorities, which include Hindus, Jains, Buddhists, Sikhs and Christians from the three Islamist countries of the neighbourhood.

Unlike earlier this year, when the Assamese were opposing it tooth and nail and ally Asom Gana Parishad (AGP) even quit the alliance in protest, this time around the BJP seems to be making serious efforts to take its allies along. The AGP looks like softening its stand on the bill as long as Assamese concerns are addressed. The AGP Minister in Assam, Atul Bora, has been quoted by The Times of India as accepting the new realities.

“We have to move forward with the reality – neither can we expel lakhs of illegal migrants nor will Bangladesh ever take them back.” Bora now believes that the “only right decision” is to “bargain (with the Centre) politically to get something for safeguarding the language and culture of the indigenous Assamese people. We know that in the bargain we will have to take an extra burden (of religiously persecuted migrants).”

This is sensible. One can empathise with Assamese sentiments, as they have been steadily losing ground to illegal migrants, both Muslim and Hindu. According to the 2011 Census, Assamese speakers are down to just about half the population of 31 million. In terms of religious demography, the proportion of Hindus in the state is just over 61 per cent – and falling.

Given these facts, the earlier anti-Bengali sentiment was untenable. The future of Assamese political power depends on the Bengali Hindu vote, many of whom were likely to the disenfranchised (if not deported) by the recent National Register of Citizens (NRC) exercise in Assam, which found 19 lakh migrants ineligible to remain in the state. Some two-thirds of them are Bengali Hindus, and many of them are in detention camps.

The Assamese Hindu’s dilemma is obvious: he can either lose out on linguistic rights, or religious rights, or both, given the rising demography of Muslims in the state. Between 2001 and 2011, the Muslim share of the population rose by a solid three per cent to 34.22 per cent, and nine of Assam 27 districts are Muslim majority districts. Given this trend, Assam could easily become Muslim-dominated over the next few decades, especially if illegal migration of Bangladeshi Muslims continues unabated.

It speaks much of India’s phony secularism that the CAB move to give citizenship rights to persecuted Hindus is seen as discriminatory and unconstitutional by some people. True, the Constitution does not allow for discrimination between citizens on the basis of their religious affiliations, but it does not prevent the government from discriminating in favour of persecuted people when it comes to future citizenship. Every country decides who can become new citizens, and India should be no exception.

CAB may not be an ideal kind of legislation, but it is the least objectionable one among many options. We can’t let persecuted Hindus rot in detention camps when Bangladesh not only won’t take them back, but when sending them back is tantamount to forcing them to live as second-class citizens and face further persecution. By putting illegal Hindu migrants in detention camps, we have already persecuted them twice over. Sending them back would be persecution thrice over.

The 'secular' parties who want the CAB to be junked are essentially asking that Hindus should be persecuted twice or thrice over by insisting that illegal Muslim migrants must also get the same rights to citizenship as persecuted Hindus.

This is how pathetic and Hinduphobic our 'secularism' is.