Cold Shoulder To Uri Attack Martyrs: Why Bengal Is Apathetic To Its Fallen Heroes 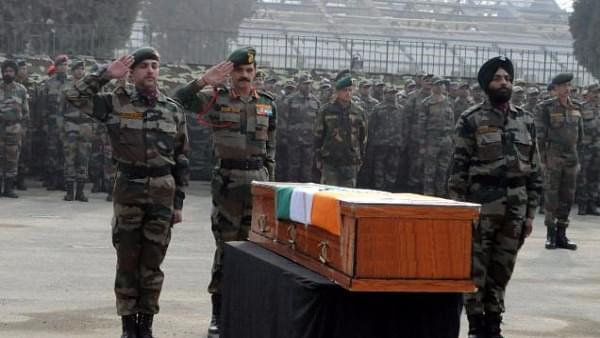 It was a sombre time at the parking bay of Netaji Subhas Chandra Bose International Airport on Monday (19 September) evening. Two coffins draped in the Tricolour were brought out of the C-130J Super Hercules aircraft of the Indian Air Force. A contingent of army men sounded the bugle, and wreaths were laid by senior officers before the two coffins containing the mortal remains of two of the victims of Pakistan’s perfidy at Uri.

But missing at the airport were Bengal’s politicians. Even the cremation of the two young men – Sepoys Biswajit Ghorai and Gangadhar Dolui – on Tuesday (20 September) remained unattended by the state’s politicians.

This, of course, is nothing new: it is not considered appropriate by Bengal’s politicians to honour soldiers who lay down their lives in defence of the nation.

Chief Minister Mamata Banerjee, who misses no (photo) opportunity to express solidarity with the distressed and dispossessed, issued no statement condoling the deaths. In fact, the Trinamool Congress was conspicuous by its silence on the Uri attack. Maybe because Mamata knows that a show of patriotism will not fetch her any votes in Bengal.

Of course, it is not just Mamata who displays such a cavalier attitude to the nation’s martyrs. During the Kargil conflict from May to July 1999, when bodies of soldiers from Bengal were being flown in regularly, the then Chief Minister and Communist Party of India (Marxist) patriarch, Jyoti Basu, religiously kept himself away from placing a wreath or attending their funerals. If anything, the then ruling party issued statements calling on then Prime Minister Atal Bihari Vajpayee to resolve the conflict through talks.

While politicians of other states make it a point to attend the funerals of fallen soldiers and accord due honour to them, in Bengal, families of martyrs are largely left to their own to mourn their losses. Any show of patriotism in Bengal is deemed to be unfashionable and juvenile. Even ordinary folks in the state don’t deem it necessary to spare a thought for those who defend the nation.

This is not to say that patriotism and nationalism are alien to Bengal. Far from that. Bengal produced a rich crop of freedom fighters and revolutionaries who gave up their lives for freeing the nation from British rule. Bengal responded overwhelmingly to the famous ‘Give me blood, I’ll give you freedom’ call of Netaji Subhas Chandra Bose; hundreds of young men and women joined the ranks of the Indian National Army then.

But things started changing from the early 1960s with the advent of the scourge of Communism in Bengal. India’s communists had belittled the country’s freedom struggle and run down the whole galaxy of India’s freedom fighters from Mahatma Gandhi (they labelled him a bourgeois pacifist) to Netaji (castigated as a fascist). They had always been more loyal to the (erstwhile) USSR and China than to their own nation. They played an insidious role during the 1962 border war with China. To the communists, their party and ideology, and not the nation, came (and comes) first.

With the spread of communism in Bengal, patriotism took a backseat. The Naxals were, in fact, downright seditious; slogans like “China’s chairman (Mao) is our chairman” reverberated throughout the state. Higher educational institutions like Jadavpur University and Presidency College turned into dens of Left radicals (they still are) who matched their commitment to the leftist ideology with their disdain for the nation. Even today, students at these institutions show solidarity with Kashmiri separatists and terrorists.

To the communists, any show or sentiment of patriotism was (and still is) akin to a show of solidarity with the ‘bourgeois nation’ and society that had to be brought under communist dictatorship. Running down the nation became de rigueur for the Left intellectuals and academics who impregnated young, impressionable minds with the poison of communism.

What also added to the apathy, if not animosity, towards the nation among the people of Bengal was the constant anti-New Delhi rhetoric by the communists. Blaming the Union government, or the ruling establishment in New Delhi, for all the ills afflicting the state became the favourite pursuit of the communists, who brought Bengal to ruin. Bengal’s masses bought that excuse and as their antipathy towards the Union government rose, so did their apathy towards the nation.

Occasions such as the Republic Day and Independence Day went largely uncelebrated in Bengal, save for the perfunctory flag-hoistings by disinterested ministers. Republic Day parades were insipid and devoid of the pomp and pageant that accompanied the parades in other state capitals. Bengal’s communist rulers displayed barely-concealed hostility towards the armed forces and refused invitations to celebrate ‘Army Day’ and such other occasions at Fort William (the headquarters of the army’s Eastern Command) or other military bases in the state.

Vijay Diwas (16 December), to commemorate the spectacular victory of Indian armed forces over Pakistan that led to the dismemberment of that country in 1971, went (and still goes) unattended by Bengal’s politicians. Commemoration of Kargil Diwas (26 July) remains confined to army bases in the state.

The apathy of the people of Bengal towards the nation’s armed forces is evident from the fact that barely anyone from Bengal is interested in joining the forces today. Till the 1980s, Bengalis used to proudly join the forces. The ranks of the armed forces had many Bengalis. The Army Medical Corps (AMC), especially, was so populated by Bengalis that it used to be zestfully referred to as the ‘Association of Mukherjees and Chatterjees’.

Today, few Bengalis join the forces, and most of the ones that do are non-residents of Bengal. Students in Bengal’s schools and colleges largely keep away from the National Cadet Corps (NCC). Ex-servicemen and even war heroes are not treated with the respect they deserve by the people of the state. There is complete apathy towards ex-servicemen, and the state government does little for their welfare as compared to all the other states of the country.

History textbooks in schools under the state’s education board talk glowingly about the victory of communists in the state and of Left icons like Marx, Mao and Lenin, but don’t have any mention of the many wars that the country has fought and the sacrifices of our armed forces.

For a better understanding of this strategy, look at what the Maoists of Nepal had attempted till they surrendered a decade ago. A clarification would be appropriate here: though India’s ‘mainstream’ communists affirm their faith in the ‘bourgeois’ parliamentary democracy, this is actually a sham meant to fool the people of India till such time as Communism takes firm roots in the country (a pipe dream, though) and conditions are ripe for a communist takeover of the country.

Though the communists no longer rule Bengal, the poison they spread persists. And Mamata Banerjee is, in many ways, more communist than the communists themselves. She is well aware that in Bengal, laying wreaths on the coffins of fallen soldiers won’t yield any political dividends for her. She is even afraid that her minority vote bank may not like her honouring soldiers who fight against Pakistan.

Hence, the sacrifice of the likes of Ghorai and Dolui are of no consequence to her and the ungrateful masses of Bengal who stay snugly under the blanket of security provided by the armed forces of India.