Cong Will Pay For Its TN Political Adventure In Karnataka 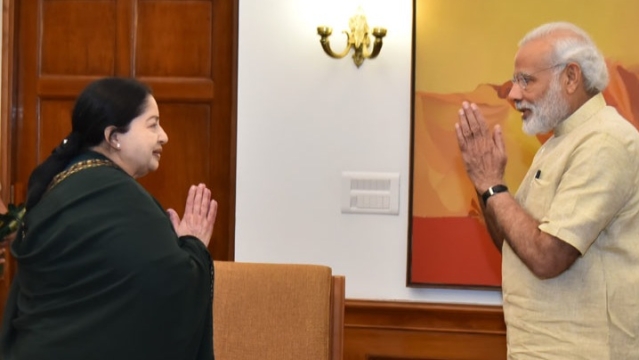 They are not new demands but have to be seen in new reality that electoral politics has created. Tamil Nadu (TN) Chief Minister J Jayalalithaa met Prime Minister Narendra Modi on Tuesday, 14 June, after getting re-elected in last month’s Assembly elections.

She has secured a renewed mandate to rule after breaking three decades of cyclic change of guard in TN. With this record in her kitty, Jayalalithaa presented Modi a shopping list of over 90 pages.

The TN chief minister’s list covers a host of issues, from GST bill to financial aid. Of them, two demands affect neighbouring Karnataka, and have overt political tones to them.

Jayalalithaa has raised the point of inter-state water issues. Specifically, she urged the centre to constitute the Cauvery Management Board (CMB). This demand is closely connected to another, that of preventing Karnataka from building a dam across the Mekedatu.

The CMB issue had been taken up by the Supreme Court itself. The court in 2013 had chided Tamil Nadu on its aggressive eagerness to have the CMB constituted after the river tribunal’s final award.

Every dry season, the neighbours raise the pitch on the Cauvery water dispute. The current season, however, is politically fertile for agreement. The Modi government is looking to get Jayalalithaa’s support in Parliament and she will extract the price for her support.

The price will also include her revenge.

Karnataka is ruled by the Congress and the BJP government at the Centre will be more than willing to go with her. Jayalalithaa is unlikely to show any mercy with Karnataka as its ruling party (Congress) had teamed up with her bitter rival (DMK) to fight her in TN elections. The Congress will pay for opposing Amma and Karnataka may have to bear the cost of party leaders’ adventures.

Thus, Jayalalithaa will teach Congress a lesson in the art of war.

As this NDTV report states, the Supreme Court, in 2013, had said that Tamil Nadu government’s apprehension, that the project being considered by Karnataka will affect water sharing is “misplaced and misconceived”.

“Why are you obsessed with the board. We have made ad-hoc arrangement. If it is not working then we are here to look into,” the Supreme Court had told the Tamil Nadu government.

The TN government had sought the court’s intervention in setting up the Cauvery Management Board. Tamil Nadu’s case was that its western neighbour was planning to construct a hydro-power station at Mekedatu and that three reservoirs were planned across Cauvery river for the same.

The UPA government had also submitted on its part that it would not give clearance to any such project.

According to Karnataka, the Mekedatu project would act as a balancing reservoir and utilise water flowing into the sea.

However, Jayalalithaa’s shopping list does spell trouble for Karnataka. As elections are about two years away and Karnataka is the only major state ruled by the Congress, the Central government is likely to go with Jayalalithaa.

Jayalalithaa will also be more forceful than ever as she would like to see the resolution of Cauvery dispute as the legacy of her rule and occupy a pivotal position in TN’s political history.