Congress Wants To Retain Karnataka, Even At The Cost Of Damaging It Permanently 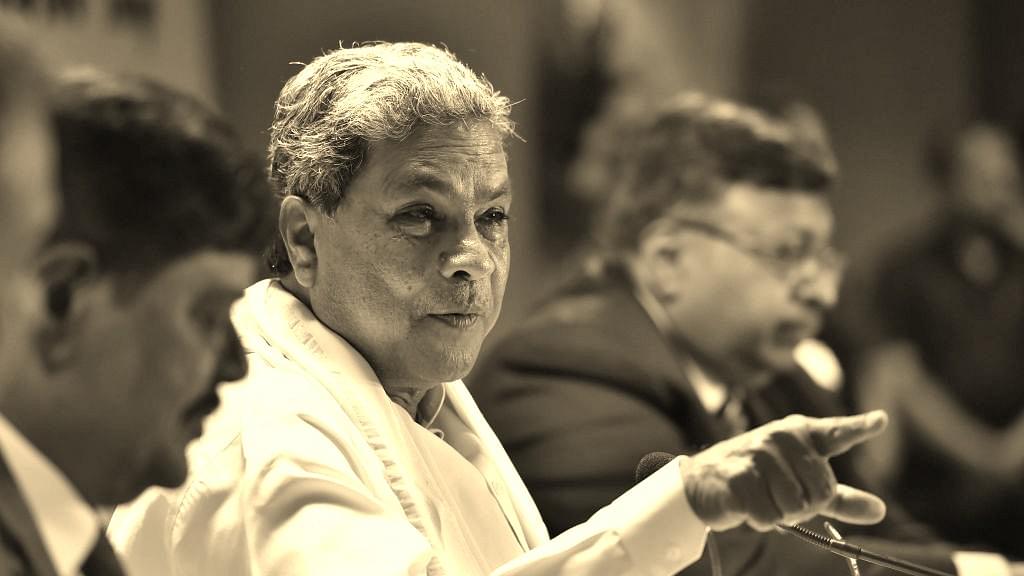 As the BJP is fond of pointing out, Karnataka is literally the last hope for the Congress. And the latter, as if to prove the BJP’s charge as correct, is using all available tools in politics to retain the state.

The first part of the Congress’ strategy seems to draw upon their learnings from Gujarat, wherein caste faultlines were leveraged to electorally hurt the BJP. The second part of the plan is the appeasement of minority communities in the state, specifically the Muslim community.

In the past few months, we have witnessed a well-orchestrated movement, demanding a separate religion status for the Lingayat community in Karnataka, Maharashtra and Andhra Pradesh. Many readers and observers, on both sides of the political spectrum, quickly came to the conclusion that this movement was designed by Chief Minister Siddaramaiah to divide the community, which is also the BJP’s strongest vote bank in the state. While such a conclusion would be close to the truth, it is not the complete truth.

This is not the first time that there has been a concerted effort by the Lingayats to get a separate religion status. There have been many previous attempts made by the community to obtain the separate religion status as one entity – ‘Veerashaiva-Lingayat’. The most recent of these attempts was in 2011-13, under Shri Shamanur Shivashankarappa and Shri Bheemanna Khandre. The attempt failed because the Veerashaiva section of the sect accepts the authority of the Vedas and the Agamas (hence, not different from Hinduism).

The separate religion movement was only revived by Siddaramaiah earlier this year under a different nomenclature – ‘Lingayat as a separate religion’ and an origin theory based on 20th century vachana scholarship.

Theological Origins And A Faultline

The theological origins of the separate religion movement of the Lingayats can be traced back to the 20th century scholarship’s view of the Lingayat liturgical texts which claimed that Vachana Sahitya to be ‘anti-caste’. This view is now accepted by major sections of the community, especially among the educated portions in north Karnataka. It is this acceptance, which has created an environment conducive for the origin and growth of this demand (the minimal growth that it has seen).

The leaders of this section of the community (political and religious) i.e. those which view Basavanna as someone who established a separate sect/religion, and claim that Basava rejected the Vedas as well as the Agamas now use the nomenclature ‘Lingayats’ . They make an effort to show that their beliefs are different from the rest of the Veerashaiva-Lingayat community, whom they call ‘Veerashaivas’. The reason they give is that Veerashaivas accept the authority of the Vedas and do not give the same position to Basavanna in their guru-parampara as Lingayats do.

What was clearly apparent, however, was the fact that a faultline existed within the community – those who accept the Vedas and the Shaiva-Agama, and those who reject it.

‘The Congress way’ was visible in totem with regard to what the party has tried to do with the Veerashaiva-Lingayat community in Karnataka. Siddaramaiah spotted the faultline within the community and deployed almost every Lingayat minister in his cabinet to organise and lead this movement. The ‘intellectuals’ that he has carefully cultivated over the years, be it Devanoor Mahadeva, Baraguru Ramachandrappa or Chandrashekar Patil, were immediately asked to join in.

It is important to remember that in addition to minority appeasement, the above strategy is hardly new to the Congress and its ecosystem. In fact, if one observes the the political history of independent India, the Congress’ use of the strategy can be broken down into three steps:

The Congress party and its state and national leaders might not find it electorally profitable to play the ‘Hindu’ card in Karnataka, as unlike Gujarat, where their hold over Muslim votes was undisputed, they have to compete with the Janata Dal (Secular) (JDS) for Muslim votes. In a few constituencies, they even have to compete with the terror-linked Social Democratic Party of India (SDPI) for the same. Just like the Tipu Jayanti celebrations, the triple talaq bill is also being used by the Congress in Karnataka to do this kind of positioning.

Early into the term, Karnataka Pradesh Congress Committee president G Parameshwara encouraged Muslims, who had taken loans from the government, to default, with the reasoning that it was part and parcel of the development process. Incidentally, a loan waiver did happen for minorities under the Karnataka Minorities Development Corporation. It cost the state Rs 28.38 crore. Then came Shadi Bhagya and a host of other ‘minority’ specific sectarian spending. In fact, Chief Minister Siddaramaiah forced the Dussehra celebrations in 2016 to be subdued using drought as the reason, while massively increasing the Chief Minister Minority Development Programme's budgetary allocations from Rs 75 crore to Rs 500 crore in a span of two years. This month, the government promised to allocate 15 per cent of the total funds specifically to minorities in the forthcoming state budget. Of this, 10 per cent (of the total state budget) will be for Muslims.

Another variant of appeasement of the Congress in Karnataka is ‘tolerance and tacit support’ to the ultra-extremist and terror-linked elements in the society. This too started early with the withdrawal of cases against 214 Muslims for taking part in communal riots in 2009 in Mysore, despite the Union Home Ministry pleading with the Chief Minister not to do so. The appeasement method then graduated to staying silent as well as giving tacit support in the form of inaction towards the killers of over 21 Hindu activists in the state, including the recent killings of Paresh Mesta and Deepak Rao.

No Punches To Be Held Back In The Last Round

Given the marginal success of its caste-based mobilisation in Gujarat, the Congress will double down on its Lingayat strategy in Karnataka. It will, in all probability, expand the scope of the minority appeasement currently underway. It needs to be noted that unlike its Gujarat strategy of taking advantage of caste faultlines in the state, the separate religion movement is more dangerous by many magnitudes. The movement, however, is not finding electorally significant support in the run up to 2018 Karnataka assembly elections.

The Congress seems to have realised this and set up an expert panel to give a report on it, a time-tested tactic to bury an issue. The panel has announced that the report won't be coming out before the assembly elections are over. However, this has led to an apprehension that the Congress might be out to do something more sinister. All in all, one hopes that the Siddaramaiah government goes out of power before it does permanent damage to the state’s social harmony.