Data Story: The Factors That Caused The Sharp Rise In Onion Prices, Explained 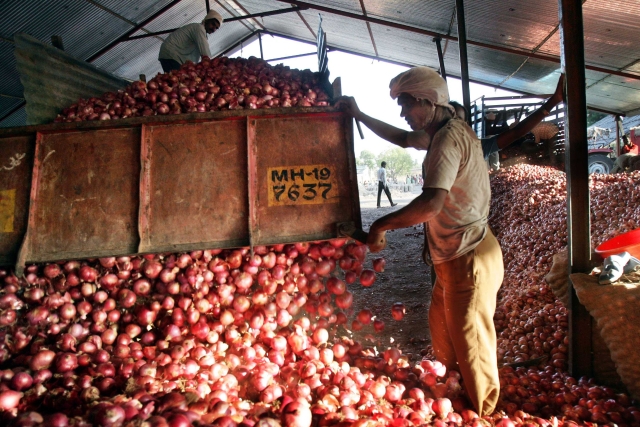 With onion prices surging since October this year, the Centre has decided to resort to importing the vegetable. On 9 November, it decided to import 1.20 (lt) onion to tame the prices.

Parastatal agency MMTC was asked to contract the imports. Unfortunately, nothing much has been heard, though around 6,100 tonnes were contracted for imports from Egypt. On Monday (2 December), MMTC was asked to buy another 11,000 tonnes from Turkey.

The imports are expected to arrive between the middle of this month and early January.

Despite various measures, including decisions to import and ban export, the Centre has been finding it tough to control surging onion prices that are ruling over Rs 100 at many retail outlets in the country.

At the Agricultural Produce Marketing Committee (APMC) yard in Nashik, the modal price or the rate at which most of the onions were sold on 2 December (Monday) was Rs 6,501 a quintal.

Such a rate in the primary agricultural market results in prices nearly doubling at retail outlets.

Data on Agmarket website, which provides prices of various agricultural products across the country, show that onion prices, after moderating to below Rs 5,000 a quintal during 28-30 November, have spiked again in the first two days of this month.

Data also shows that onion arrival during the week-ending 2 December was 644 tonnes, about a fifth of the 3,103 tonnes that arrived during the same period last year.

The spike in onion prices has resulted in the Narendra Modi government being criticised for its failure to control the surge. Memes on social media show onion as something precious as gold.

While there is no gainsaying that prices are likely to rule at these levels for a few more weeks, it would be worthwhile to look into the reasons for the spike.

Historically, onion prices tend to rise around September onwards and their behaviour depends on the arrival of the early Kharif crop that hits the market during September-end.

In India, early Kharif onions are harvested during October-December after the crop is transplanted during July-August. The late Kharif crop is harvested during January-March after October-November transplantation, while Rabi onions hit the market during March-end-May after crop transplant during December-January.

Thus, there is a huge gap in arrivals between May and October due to which prices tend to rise. Supplies during this period are met through onions that are stored by farmers and traders.

The fact that Rabi onion has a larger shelf life than Kharif onion also helps to a large extent in maintaining supplies.

According to the Department of Horticulture, heavy rains during September-October damaged the onion crop that was ready for harvest.

The Maharashtra crop that was ready for harvest in October was affected badly due to rains under the influence of Cyclone Maha. A major portion of the crop in the State, the top onion producer in the country, was damaged in the unseasonal rains.

According to the Indian Council of Agricultural Research and Directorate of Onion and Garlic Research, the entire crop in Maharashtra was affected by the rains. The late Kharif crop is also feared to have been affected by October rains.

In these circumstances, it is unfair to criticise the Centre. If prices do not increase when supplies are low, then there is something wrong with the country's economy and market.

Swarajya took a look at the arrivals during October-November for a period of 10 years.

Data sourced from Nashik-based National Horticultural Research and Development Foundation show that arrivals at 4.39 lakh tonnes (lt) in October this year were the second-lowest in a decade. In 2011, the arrivals were the lowest at 4.23 lt.

After 2010, it is the first time when arrivals in November have been lower than October. In December 2010 and January 2011, onion prices hit a record Rs 100 a kg at retail outlets.

The important aspect here is that since 2015, total supplies during October-November have always been over 10 lt — they topped 15 lt in 2016. Compared to last year, supplies are over 41 per cent lower this year, thus leading to a sharp spike in prices.

Thus, it is clear that prices have surged since market forces — demand and supply — are at play than any extraneous reasons as in December 2010-January 2011.

Then, onion traders and a few big traders with well-connected networks played a huge role in hoarding onion and driving its prices up.

A study by the Institute for Social and Economic Change, Agricultural Development and Rural Transformation Centre in Bengaluru on behalf of the Competition Commission of India, revealed that traders in Maharashtra and Karnataka colluded in selected markets, resulting in onion prices surging.

This year, with supply-demand coming into play in the market, there is no doubt that consumers will have to pay more for their onions, probably even beyond the New Year.