Days After Plea Seeking Ban On Polygamy By Muslim Men, Muslim Woman Burns Husband And His Second Wife To Death In Bihar 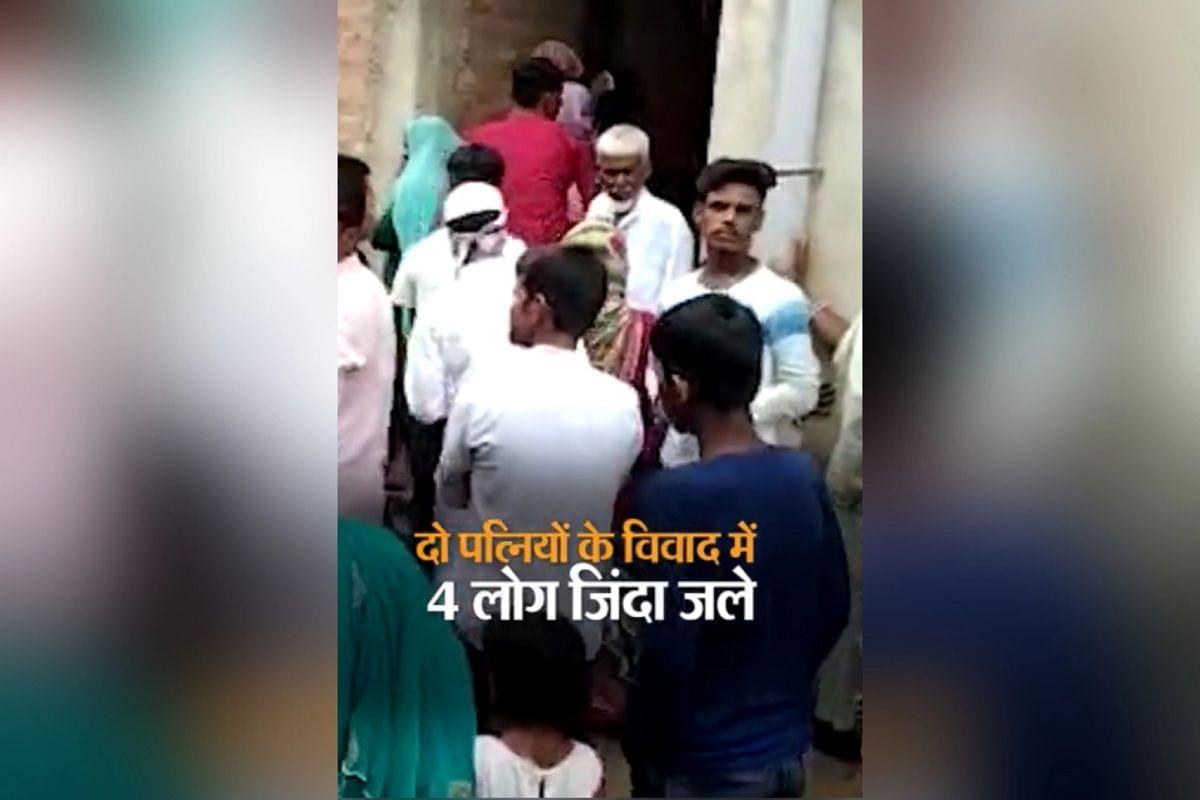 Screengrab from a Dainik Bhaskar report

Four members of a family were charred to death in Bihar’s Darbhanga district on Saturday (14 May) after the first wife of a man lit herself and others on fire over her husband’s second marriage, as per various reports.

Bibi Parveen is Mohammed Khurshid Alam’s first wife. When Parveen could not get pregnant, Khurshid married Roshni Khatun from a nearby village. Parveen was unhappy with the second marriage.

The second wife recently got pregnant. After a routine but heated spat, Parveen poured kerosene on her husband, Roshni, and his mother.

All four — including Parveen herself — died of burns.

The incident happened around 5 am at their house in Sheikhpura colony in Supaul Bazaar area, which falls under Biraul police station.

Polygamy has been a practice in ancient India among kings and rulers, though not widespread. After independence, the Hindu Marriage Act, 1955, declared second marriage, when the current spouse is living, as null and void, and punishable by law.

“Marrying again during lifetime of husband or wife —Whoever, having a husband or wife living, marries in any case in which such marriage is void by reason of its taking place during the life of such husband or wife, shall be punished with imprisonment of either description for a term which may extend to seven years, and shall also be liable to fine.”

The section exempts divorced couples and those who have been living separately for seven years.

Though the law applies to all Indian citizens irrespective of religion or caste, personal laws are given credence over IPC in these matters.

As the family affairs of Muslims are governed by the Muslim Personal Law (Shariat) Application Act of 1937, which allows Muslim men to have four wives (Muslim women are not allowed four husbands), Muslims are exempted from this provision in the law.

However, over the years, several cases where Muslim personal laws have conflicted with the IPC have gone to court.

In February 2015, a Kerala court held that Section 494 of the IPC applied to all offenders (of bigamy or polygamy) irrespective of religion but subject to personal laws. The court was hearing a petition asking bigamy to be made punishable for men and women of all religions, including Muslims.

The same year, the Gujarat High Court held that Muslims cannot be booked for bigamy or polygamy under the IPC as it is permissible in Muslim personal laws. The court was hearing a petition by a Muslim man, Abbas Rasool Mohammed Merchant, who had sought the quashing of a first information report (FIR) filed against him by his first wife, Sajedabanu, in 2010 for marrying another woman while she was still alive and not divorced.

The court, however, observed, “…notwithstanding there is no codification by the legislation of marriages amongst the Muslim, polygamy is not encouraged and is an exception and not a rule.”

The same year, the Supreme Court of India ruled that Article 25 (right to propagate and practise any religion) did not protect the right of Muslim men to practice polygamy.

The court was hearing a petition filed by one Khursheed Ahmad Khan seeking the quashing of an order by the Uttar Pradesh government to sack him from his job as irrigation supervisor for violating service rules.

Khursheed had married a second time during the existence of his first marriage without taking permission. The sister of his first wife had approached the National Commission for Human Rights against the second marriage.

The organisation released results of a survey in 2017 where they interviewed 289 Muslim women to conclude that women in polygamous marriages felt traumatised by their situation.

It is pertinent to mention that despite the Hindu Marriage Act criminalising it, polygamy continues to be practised in the Hindu community, even though by a small section and mostly restricted to certain geographies.

Polygamy, though most prevalent among men, is known to be practised among some women in India as well.

A study by Punjab University between 2013-17 found that polyandry is practised in at least one Haryana and two Punjab districts. These included Daulatpur village in Haryana’s Yamunanagar district, where the Gujjar Muslim community practices polyandry, and villages Piplian in Punjab’s Mansa district and Panechan in Punjab’s Fatehgarh Sahib district, where the Jat Sikh community practices it.

Last month, a Muslim woman named Reshma filed a petition in Delhi High Court to declare bigamy or polygamy by a Muslim husband in the absence of consent of his first wife as illegal.

As per information provided by her to the court, she married one Shoeb Khan in 2019 and had a child with him, but he abandoned her and the child, and is now preparing for a second marriage.

In the last hearing in the case held on 2 May, the court asked the centre to file its response on the matter.

Violence Over Polygamy In India

Two years ago, a sensational video came to light where a Muslim woman was seen standing over a dead body, pistol in hand. The woman, who had fired the bullets, was clad in burqa while the one lying on the road in a pool of blood was wearing a red salwar kameez.

The police said the killer was the first wife of a Muslim man named Zafar, who had killed her husband’s second wife. In this case, the first wife was Muslim while the second belonged to a Hindu family who had converted to Islam to marry Zafar.

In January, a woman in Jharkhand named Dolly Devi was arrested by the police for killing her husband Ashok Soni’s second wife, Kumkum Devi.

In 2021, a woman named Rehana was arrested for killing the second wife, Nazia, of her husband Jahangir. In this case, the police arrested Jahangir as well, as Nazia’s parents had accused him of harassing their daughter for dowry and being an accomplice in the crime.