Dead-Heat In Karnataka: Both BJP And Congress Huffing And Puffing Far From The Finish Line 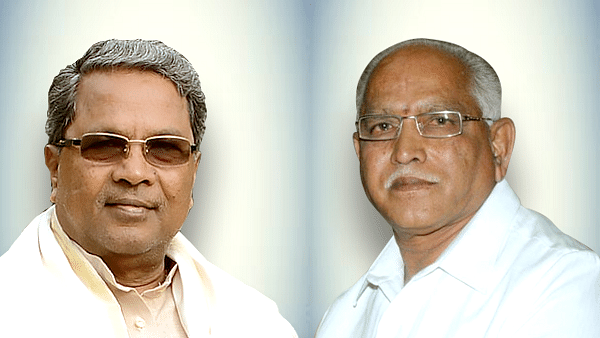 A must-win election for the Congress, and a muscle-flexing show for the Bharatiya Janata Party looks like ending up as a dead-heat between the two in Karnataka. The polls, due on 12 May, may result in a hung assembly, according to the latest opinion survey. It indicates a 91-89 seat split between the Congress and the BJP, with a third party – the Janata Dal (Secular) - bagging 40 seats.

The seat-split is based on the BJP winning over 35 per cent of the vote, and the Congress 38.6 per cent, with the JD(S) managing 21.33 per cent. The BJP’s gain of 15.14 per cent over 2013 is largely the result of the return of its chief ministerial candidate, B S Yeddyurappa, to its fold. Yeddyurappa fought the last election separately under the banner of the Karnataka Janata Party.

Broadly speaking, the Times Now-VMR survey shows the BJP improving it performance in the Mumbai-Karnataka region (the Lingayat belt), Hyderabad-Karnataka, and central Karnataka, while posting weaker-than-expected shows in coastal Karnataka and Greater Bengaluru. The Congress is well ahead in Old Mysuru.

If the BJP is to pull off any surprise on 15 May, when the counting will be done, it will have to up its show in coastal Karnataka and Bengaluru.

The survey suggests that the 2013 results, where the Congress romped home with 122 seats, was an aberration. But for the split in the BJP, that fight might well have thrown up the same kind of result that the opinion polls are showing now.

A hung assembly will be problematic for all three parties. It will require great political contortions for the top two parties to try and form the government.

The problem for the Congress is greatest. With this kind of showing – assuming the final results pan out as indicated in the survey - it will now have to bargain with the JD(S) for forming a government after falling out badly with the latter. Also, the JD(S) has no love lost for Chief Minister Siddaramaiah, and the price the Congress may have to pay for the alliance may be his head. Congress may be happy to oblige, for there is considerable opposition to Siddaramaiah even within the party, since he was a leader brought in from outside.

The question is whether the Congress will sacrifice the man who brought it victory in 2013 and managed to fend off anti-incumbency in the face of a determined onslaught by the BJP this time? The Congress has the greatest incentive to compromise since the party cannot afford to lose the biggest state it currently runs. Control of rich states is often crucial for funding elections.

For the JD(S), even though it should enjoy the role of kingmaker, the reality is that it does not have much room for manoeuvre with the BJP. Reason: having obtained the support of Mayawati’s BSP, and also Asaduddin Owaisi’s MIM, the last thing it can do is show eagerness to hook up with the BJP. One cannot rule this out, but it is not going to do the image of JD(S) as a reliable poll partner any good. Both the BSP and the MIM will be livid.

For the BJP, a win would have been nice to have, but a significantly improved performance over 2013 means that it can claim two things: that the party is not losing steam; and that it has a strong footprint in the south. More important, it means the party can count on retaining its share of Lok Sabha seats in 2019.

A hung assembly is not a bad outcome from the BJP but is a huge challenge for the Congress. The JD(S) may well be the real winner in this election.

Another possibility: whichever coalition forms the government, it will live at the mercy of the JD(S). Not a recipe for stability.

The survey results could well be proven wrong on 12 May, if the undecided voters swing decisively one way or the other.

Perhaps the man who could make the difference is Narendra Modi, who could begin campaigning hard from next week. Rahul Gandhi’s best contribution to the Congress is that he has not so far derailed its prospects in the state. For that, Siddaramaiah should be grateful.