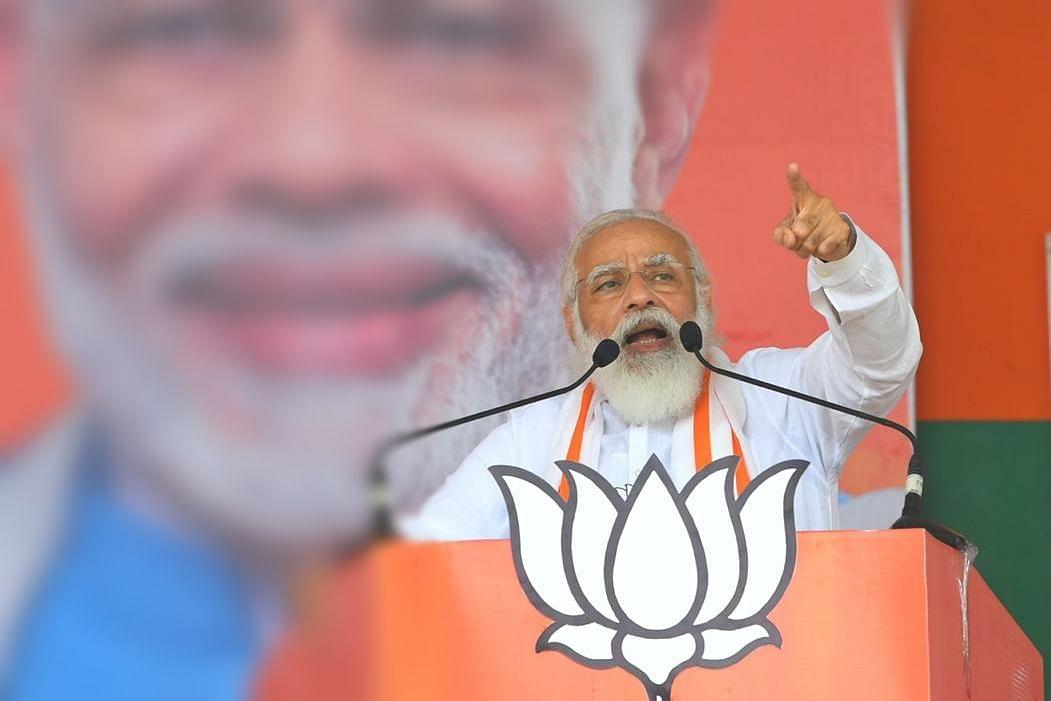 Nitish Kumar’s wish of serving his fourth straight term as Bihar chief minister before hanging up his boots will come true. But he has to thank Prime Minister Narendra Modi for that.

The credit for the close win registered by the National Democratic Alliance (NDA) in Bihar goes to Modi, who could stem the tide of anti-incumbency against Nitish Kumar and beat back any popular anger over the latter’s response to the pandemic-induced migrant crisis.

As had been explained in this, this and this articles earlier, Kumar’s failure to create jobs, his political flip-flops, his lacklustre third term (2015 to 2020) and his over-reliance on an allegedly corrupt bureaucracy generated popular anger against him.

The sheen had clearly worn off from Kumar, who was till some time ago known as sushasan babu (the personification of good governance).

While no one disputed that Bihar had witnessed a lot of development between 2005 and 2015 (Kumar’s first two terms), the development momentum had slackened appreciably in his third term.

He also failed to take forward and build on the development achieved in the first decade of his tenure.

The development — a vast improvement in the state’s physical and social infrastructure — that Nitish Kumar brought about in the first two terms had triggered rising aspirations among the state’s youth, and his failure to meet those aspirations resulted in disappointment.

Nitish Kumar was also perceived to have done nothing to help the lakhs of Bihari migrant workers who returned to the state during the pandemic.

The relief that came their way was credited largely to central government programmes crafted by Modi.

Yadav’s promise of 10 lakh government jobs also enthused the youth, who started flocking to his meetings in large numbers. Yadav, in his rallies, pilloried Kumar for his failure to create jobs and revive the state’s moribund economy.

Kumar’s campaign, in contrast, seemed tired and lacklustre. He even failed to attract respectable crowds at many places and his campaign appeared to be fast losing steam.

A week before the first phase of polls on 28 October, it appeared that Yadav had been successful in wresting the narrative from Kumar.

As soon as the alarming ground reports about a stellar performance by the Mahagathbandhan reached the BJP central leadership, Modi decided to energise the NDA’s flagging poll campaign.

Deploying his renowned oratorical skills to fire up NDA grassroots level workers, Modi also sharpened his attack on Tejashwi and the dark days of RJD rule in Bihar from 1990 to 2005.

Modi successfully steered popular attention away from Yadav’s fantastical promise of 10 lakh jobs and the anti-incumbency against Kumar by reminding the electorate of the RJD’s ‘jungle raj’ that was marked by killings, extortions, kidnappings, large scale corruption and nepotism.

Modi labelled Tejashwi Yadav as jungle raj ka yuvaraj (the scion of ‘jungle raj’) and highlighted the large scale corruption under Tejashwi’s father Lalu Yadav, who is in jail after being convicted of the infamous fodder scam.

Modi’s aggressive pitch against the RJD revived memories of those dark days of RJD rule among the people of Bihar.

Tejashwi had tried to steer the campaign away from those memories and had not even put photos of his parents (who are associated with then jungle raj) in the RJD’s publicity materials.

But Modi scuppered his carefully-laid plans and made jungle raj the central narrative of the poll campaign.

Simultaneously, the consolidation of the RJD’s traditional Muslim-Yadav (MY) vote bank behind Tejashwi triggered a counter-consolidation among the upper castes, non-Yadav Other Backward Classes (OBCs), the extremely backward classes (EBCs) and the Mahadalits who had borne the brunt of RJD misrule.

Bihar had witnessed the rise of notorious mafia dons, mostly Yadavs and Muslims, who were allegedly patronised by the RJD, from 1990 to 2005. The dons and criminal gangs had left Bihar traumatised and deeply scarred.

And so the masses, to avoid a return to those days, started swinging towards the NDA. This is apparent from the results of the second and third phases of the polls where the NDA’s strike rate increased dramatically to 54.3 and 66.7 per cent respectively while the Mahagathbandhan’s strike rate fell to 44.7 and 26.9 per cent.

A look at the NDA’s strike rate in districts where Modi addressed rallies and the districts he left out also bear this out.

In the third phase, the NDA’s strike rate in districts where Modi addressed rallies went up to 73.7 per cent and the figure was 62.5 per cent in the districts he missed.

These figures also prove that Modi’s push to the campaign soon after the first phase and his sharp aggression against the RJD as well as the Congress delivered results. This turn of the tide in favour of the NDA was predicted in this article.

Before the first phase, Modi largely limited himself to listing out the achievements of the NDA at the Centre and the good work done by Nitish Kumar in Bihar.

That was not working and it was the quick change of tack by Modi, and top BJP campaigners like Yogi Adityanath, which took the battle to the Mahagathbandhan camp and steered the campaign to RJD’s misrule in Bihar, the endemic corruption of the Congress and the dynastic politics of both the parties.

Nitish Kumar, thus, has to be thankful to Modi for his last political wish coming true. Without Modi, Bihar would perhaps have seen a return to jungle raj.