Deconstructing The Politics of Kamal Hassan 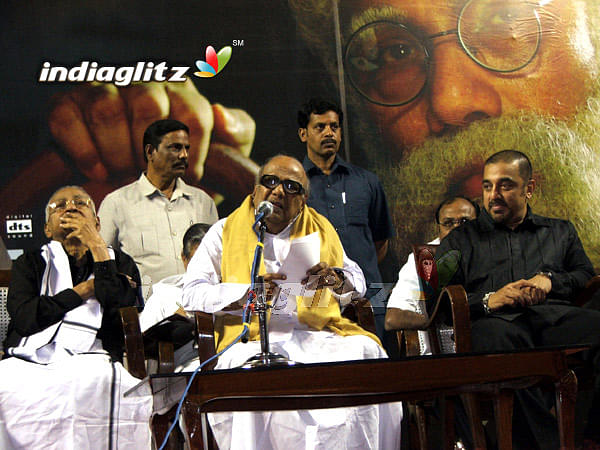 At the outset, let us give credit to the man where it is due. Kamal Haasan’s ideology may be flawed, or even perverted, but I don’t think even the worst of his detractors can accuse him of being an opportunist, who chooses to espouse a certain cause to feather his own nest. Only a handful of people have put their reputations and livelihoods on the line for the medium they so passionately love and live for, and Kamal is certainly one of them.

In fact, Kamal’s love for his art is as passionate and intense as his character Balu’s in the film Sagara Sangamam (Salangai Oli) where he plays a talented yet unrecognised classical dancer. In short, Kamal truly believes in what he stands for, be it the brand of cinema that he wishes to be known for, or his political stance (which tend to be naive and crude, besides misinformed).

Since Kamal is pretty vocal about his political views in his interviews and through his films, he must be treated as a public personality, who cannot escape scrutiny or criticism for the views he holds. Consequently, the defence of being a “private citizen” is not available to him.

The question that forms the subject matter of this post is what does Kamal stand for politically and what could be the contributory factors for the manner in which he airs his views?

Kamal has always called himself a great admirer of Mohandas Karamchand Gandhi and the Kannada-speaking Balija Naidu (from a devout Vaishnavite family) who came to be known as the atheist protector of the Dravidian Tamil language and tehzeeb (panpadu) “Periyar” E V Ramaswamy.

Kamal appears to blend Gandhi’s brand of one-sided pacifism with Ramaswamy’s virulent anti-Vedic anti-Brahmin fabricated rhetoric and the inevitable generous dollop of communism, which passes off as “rationalism” or “rational atheism” (Pagutharivu as he calls it in Tamizh). The communist hues are partly, but certainly a consequence of his association with his mentor K Balachander which was apparent from the brilliant roles he essayed in movies such as Varumayin Niram Sigappu or Unnal Mudiyum Thambi or Anbe Sivam.

Subsequently, in the movies that Kamal directed or ghost-directed, he appears to have made it a point to shove his half-baked political message and pseudo-theories forcibly down the throats of his audience with the sincerity and naivety of his 4-year old Selvam from Kalathur Kannamma.

Take Hey Ram for instance. Portions of this movie deserve credit for the authentic manner in which certain aspects of Partition riots and “Direct Action Day” were handled and depicted, particularly the character of the back-stabbing tailor Altaf and the agonising rape scene.

In this scene, where Kamal and Rani Mukherjee are over-powered by Jinnah’s faithful, Kamal’s depiction of the psyche of the aggressors is pretty convincing. While one of them is the turncoat tailor Altaf, who was trusted by Kamal’s character Saket Ram, the other attacker is clearly shown as having “unnatural” preferences.

Saket Ram’s instant change to a revenge-seeking husband (not as a Hindu, but as a husband) as a consequence of his wife’s brutal gang-rape and murder is probably one of the most powerful and persuasive depictions in the entire movie, or even cinematic history. Until this point, Kamal truly gets his character right in terms of consistency.

But the part where Kamal’s political leanings start interfering with the character arc of Saket Ram is when he introduces Shri Ram Abhyankar, which is clearly inspired by the second sarsanghchalak of Rashtriya Swayamsewak Sangh (RSS), Shri Madhav Sadashiv Golwakar. In fact, the make-up of Abhyankar leaves very little to imagination.

Right from the abhivadanam-laced introduction of Abhyankar to the subdued elation on spotting the Yagnopavit (janeu/the sacred thread) across Kamal’s chest, the insinuation that the right-wing is essentially a Brahminical clique again brings to fore Kamal’s Periyar-esque intense hatred of the faith and heritage of his own family.

The references to the now-debunked Aryan-Dravidian Theory through the dialogues of Shah Rukh Khan’s character Amjad Ali Khan must have been a moment of pride for the monumental ego of the inferiority-complex ridden school dropout in Kamal, who must have wanted to shout from the rooftops that he had read his Romila Thapar, Irfan Habib and R S Sharma.

The focus in the movie is on demonising the RSS by accusing it of plotting M K Gandhi’s assassination, and to portray the assassination as the response of the Hindu community which, according to him, was emasculated by the shaming of its women.

Barring a token rant at Suhrawardy holding him responsible for Direct Action Day riots, nowhere in the entire film is there an attempt to strike a balance and understand the ideological underpinnings of the “right” de hors the spectre of Partition. After all, the Partition was a consequence of the two-nation theory, and not the other way round. Probably, for some, the Partition riots were a corroboration of the two-nation theory. But none of this is explored in the movie.

Instead, throughout the film, Kamal’s character is portrayed as one whose anger is used and manipulated by the “right” to turn him into Gandhi’s assassin, all of which is based on Leftist lore, without a shred of evidence to support it. Ah yes, cinematic liberty and the artist’s freedom of expression must conveniently come to the rescue when the “right” is the subject of scrutiny. Facts can not only go to hell when the “right” is critiqued, they dare not be used or presented when the “left” is under the scanner.

After Hey Ram, again in Anbe Sivam, it is the Hindu’s faith which must measure up to the lofty humanitarian goals of Communism and the Church (Kamal probably hasn’t heard of Gulags or the Iron Curtain or even Maoism or the Inquisition. I am not sure if Kamal has given thought to what Maoism could do to Tamizh and its history).

Yet again in Dasavataram, Kamal’s pederastic love for E V Ramaswamy and his ideology finds aggressive expression in the form of Hindu-bashing and mischievously pitting Shaivaites and Vaishnavites against each other, with Islam and Christianity being spared from his tirade against religion. Or does he not consider them true religions at all? Only Kamal can answer this question.