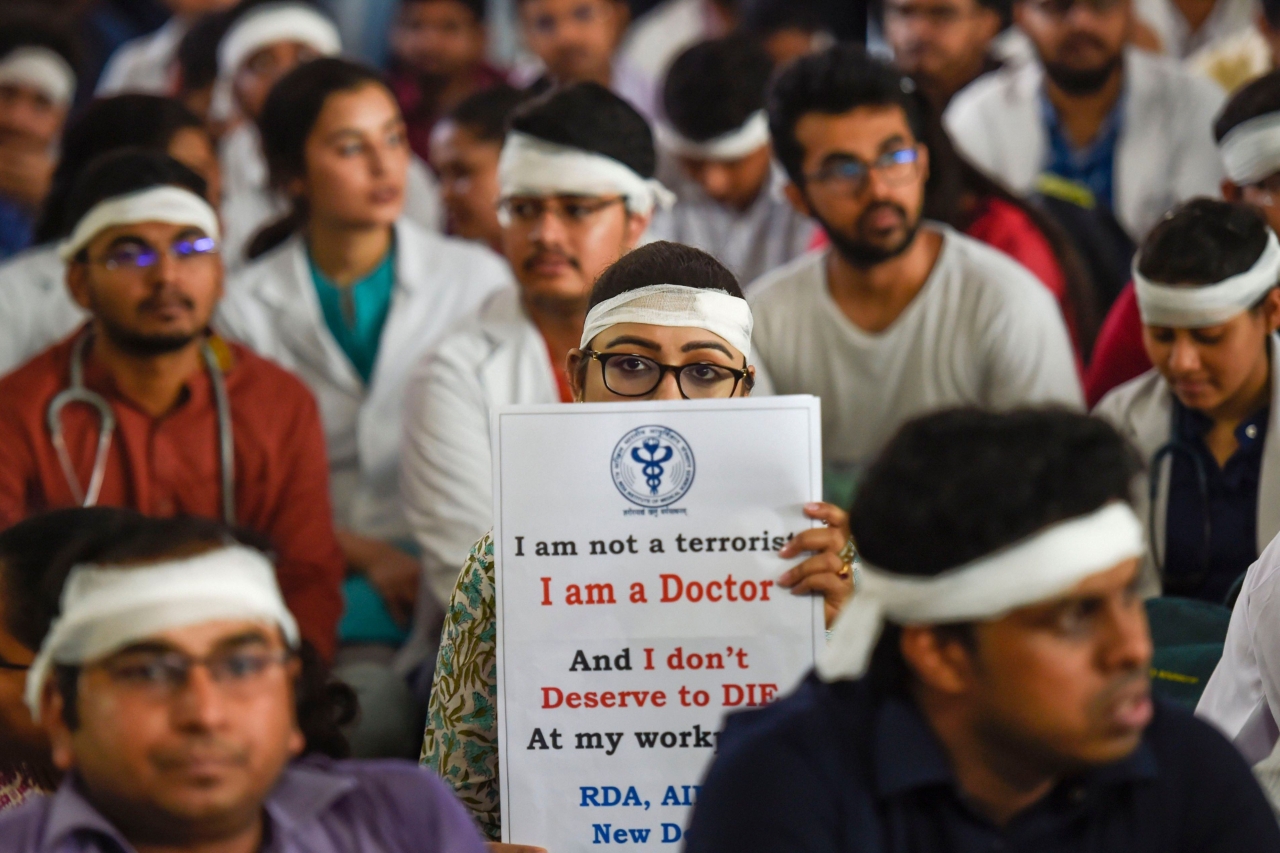 Even as senior doctors across Bengal express their deep disappointment with the abject climbdown by junior doctors, Kolkata’s citizenry continues to suffer from the culture of mob violence that had triggered the stir by medics.

The week-long ‘ceasework’ by junior doctors ended on Monday evening without the striking doctors achieving any of their major demands. Large sections of the medical fraternity say that Chief Minister Mamata Banerjee sweet-talked junior doctors into withdrawing the strike without conceding any of their major demands. The primary demand — arrest of all of the 200-odd people who had nearly killed two junior doctors at Kolkata’s state-run NRS Medical College and Hospital last week (10 June) — remained unfulfilled. The agitating doctors who met her on Monday evening (17 June) at the state secretariat did not even broach their major demand for an ‘unconditional apology’ from the Chief Minister for her intemperate remarks and wild allegations (read this).

But more than the meek surrender of the doctors, it is the non-redressal of the basic issue that they were agitating against which will continue to haunt Kolkata and Bengal. The assault on the junior doctors at NRS was carried out by a blood-thirsty Muslim mob from a notorious crime-infested slum of Kolkata. That the police posted at the hospital reportedly did not prevent the mob from attacking the doctors and then arrested only five of them (not, reportedly, the prime accused) triggered the doctors’ stir.

Many felt that Banerjee’s minority-appeasement got in the way of the police taking strong action against the rest of the mob, which included the imam of a mosque at the slum, which is also said to be a den of criminals. Banerjee herself played down the murderous assault on the doctors, terming it as the result of a “spontaneous outburst of grief at the death of an old man (the imam’s father)”. That she would not allow the police to carry out large-scale arrests of all those who participated in the attack on the doctors was apparent right from the beginning and one of the primary goals of the week-long doctors’ agitation was to force her to act on this count.

However, the shameful climbdown by the doctors and the lack of any action on the overwhelming majority of the mob that assaulted the doctors has sent a strong message to all goons and criminals of Kolkata: they can act with impunity. “The belief among them (the lumpens, criminals and goons of Kolkata) that they can get away with many crimes has just been reinforced. They know that come what may, Banerjee will not allow her police force to touch them since she is afraid of losing her Muslim vote bank. So they will act more brazen now,” said a senior doctor at a government-run medical college in Kolkata. He was one of the hundreds who had tendered their resignations last week in a show of solidarity with the junior doctors.

The indirect encouragement that Kolkata’s goons received from the non-action against the mob of NRS assaulters was felt on the city’s streets that very evening. Ushoshi Sengupta, winner of the Miss Universe India title in 2010, was travelling back home from work late that night when a group of unruly youngsters in motorcycles hit the app-cab she was in. What followed was a harrowing experience (read this Facebook post by her) in which the group of Muslim youth from another slum in South Kolkata not only beat up the app-cab driver and vandalised the vehicle, but also followed Sengupta and her male colleague to the latter’s home to snatch away the cellphone in which she recorded the incident.

In Sengupta’s case, too, cops from four police stations, all in South Kolkata, refused to help her and even allowed the assaulters to get away after they ostensibly got to know the identities of the young men. It was only after her Facebook post went viral and got many condemnations of police inaction that the cops ultimately acted.

By Tuesday evening, seven youngsters — Sheikh Rahit, Fardeen Khan, Sheikh Shabir Ali, Sheikh Gani, Sheikh Imran Ali, Sheikh Wasim and Atif Khan alias Mohammed Samsad — were arrested. However, these arrests could only be an eyewash since the goons have been charged under mild sections and it is only a matter of time before they are back on the streets again. Going by past experience, the police will not pursue the case vigorously and will present weak chargesheets, which will result in the ultimate acquittal of the accused.

“There is an unwritten rule in the (police) force that arresting members of the Muslim community should be avoided as far as possible. Only in cases where the complainants are Muslims are police allowed to arrest the accused (be they Muslims or from any other community). If arresting Muslim(s) becomes unavoidable, the standing instructions are to file mild charges against the accused and carry out a perfunctory investigation so that the chargesheet that is ultimately filed is weak and the accused don’t get convicted by the courts. There have been instances in the past when police tried to investigate cases involving members of the minority community seriously and after intervention from powerful members of the community close to the ruling party (Trinamool), police were asked to go slow,” said a senior police officer of the rank of Superintendent of Police (SP), who retired very recently.

The SP-ranked officer, who did not want to be named for obvious reasons, said that right at the beginning of Banerjee’s tenure as Chief Minister, a strong message that Muslims should be treated with kid gloves went out to the police force. “Terming the Park Street rape case as a ‘sajano ghotona’ (concocted incident) just because the prime accused were youth from influential Muslim families was the first strong signal to the police. Senior Indian Police Service officer Damayanti Sen, who solved the case as Kolkata Police’s Joint Commissioner (Crime) despite the Chief Minister dismissing the rape case as concocted, was repeatedly punished. The entire police force got the message that Muslims cannot be penalised for the crimes they may commit,” said the retired police officer. Interestingly, the newly-elected Trinamool Member of Parliament from Basirhat, Nusrat Jahan, was a close friend of the prime accused in the Park Street rape case and had allegedly shielded him while he was on the run.

Ushoshi Sengupta’s case was not an isolated one and has, in fact, become quite a common occurrence on Kolkata’s streets in recent years. Bike-borne gangs of mainly Muslim youths from slums and lower middle class families rule the roads at night and create mayhem. Sengupta, being a relatively high-profile figure with many followers on social media, could get the police to act against her tormentors, albeit after 24 hours.

“Most of those who bear the brunt of harassment, intimidation, assault, molestation and eve-teasing by Muslim youths on the streets of Kolkata cannot get their complaints registered by the police. Most often, the police advise the complainants to 'compromise' with the accused in order to avoid further trouble. There have been many cases of the accused following complainants to the police stations and daring them and the police to act. They have made a complete mockery of the law,” said the retired police officer.

Kolkata’s embattled citizenry thus feels that the dismal end to the doctors’ strike with Banerjee completely skirting the main demand — that of arrest and prosecution of all the 200-odd bloodthirsty people who carried out the murderous assault on the NRS doctors last week — and allowing the guilty to go scot-free has sent out a sinister message to Kolkata’s troublemakers and history-sheeters. The message: they can get away with anything. That is why a sense of deep foreboding and helplessness — that Kolkata’s streets will become increasingly unsafe after dusk — has overtaken Kolkatans.

Get Swarajya in your inbox everyday. Subscribe here.
Tags:
313 Shares