Defence Of Yakub And Contempt For Social Media 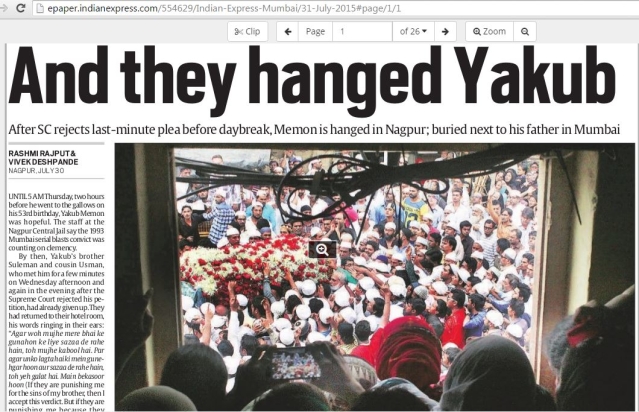 The one medium which dispenses completely with middlemen, in the realm of ideas, is social media. It allows a free and fair play of every kind of idea, and the best ideas over time build their own place in the market.

Pratap Bhanu Mehta, writing in the Indian Express, has expressed his contemptuous disgust at those who express their views in social media. The context in the immediate case: the hanging of Yakub Memon, one of the key masterminds of the dastardly 1993 Mumbai bombings that killed 257 people and injured hundreds more. Yakub Memon was hanged after he was given recourse to every conceivable legal option.

The sagely Mehta though did not stop at merely expressing his disgust at social media. He had words of advice for others too. But before we delve into the social media arguments of Mehta, consider a snapshot of the screaming, front page, headline in the Indian Express on the same day that Mehta’s article was published.

So, in an irony which would have been supremely funny, if it was not so fraught with frightening consequences, the newspaper with which Mehta has been associated for almost a decade now, and the paper he chose to dispense his advise from, does exactly what Mehta accuses others of doing.

Front page, double-bold screaming headline says “They” hanged Yakub. Who is “they”? The Supreme Court of India or the victims of Yakub’s diabolical plot?  Or could it be that the constitutional system of India is “they”?

And every “they” implies the existence of a “we”.

Who is “we”? The only people who may legitimately consider Yakub as “we” are the plotters of 1993  – Dawood Ibrahim, Tiger  Memon and of course the Pakistani intelligence, the ISI. Who else is “we” in reference to Yakub as per the Indian Express?

Now consider what Mehta had to say about institutions in his article:

“Institutions are not considered mediators of conflict or truth. They are weapons in a partisan battle.”

Perhaps Mehta is right. Institutions are indeed weapons in a partisan battle. Clearly Mehta was thinking of the institution of media and the Indian Express too, which has taken a considered view of who is “they” and who is “we”.

The Express does not stop at merely this. Just consider this para in a front page report, again in Indian Express, and again on the same day that Mehta thought it fit to advice one and all, about the Yakub’s hanging:

The Express, in a front page story, is seeding an idea in the minds of people who may not even have considered it – that the burial of Yakub is not to be treated as a closure but the starting of something!

Now consider another advice that Mehta offered in his article:

“The case has opened raw wounds, but in a way that is going to be politically explosive.”

Perhaps Mehta was right again that the Yakub case will open raw wounds. After all, the Express itself is planting those explosive thoughts in the minds of people.

Finally, let us return to the contempt that Mehta had for social media:

“Social media managed to create the postmodern equivalent of a medieval lynch mob, an almost cowardly but Talibanesque hounding of anyone who disagreed with the hanging.”

One of the things about social media is that it is free and open to everyone. There has been no other example of such a medium in the past where everyone could become a publisher and broadcaster of views without having to go through an intermediary.

In every other form of mass dissemination, be it in print or TV, there is an intermediary, who is gloriously called an Editor but could also be referred to as a middleman, between the consumer of views (the reader) and the originator of ideas. Even if we dispense the other dubious connotations that are associated with middlemen, the ideological and belief systems of the middleman (in this case the Editor) would still play a very important factor in what gets printed in his or her newspaper. To consider an analogy, would I post on my Twitter timeline, views and articles which do not subscribe to my world-view?

The one medium which dispenses completely with middlemen, in the realm of ideas, is social media. It allows a free and fair play of every kind of idea and the best ideas over time build their own place in the market.  Indeed, just as free markets do away with the controlled crony-socialism, social media has potential to do away with the controlled crony-intellectualism. Therefore the contempt that Mehta has for social media, on the broad level,  is interesting.

In the immediate context, those on the side of hanging of a terrorist, convicted after the due process,  are described as cowardly. One presumes that this is in juxtaposition to the “brave” people who appeared on Television debates arguing in favour of Memon? If so inclined, one could ask many questions, those one-line rebuttals, to Mehta. Like, which kind of free democracy should allow speech only to the “brave” elite people and deprive the same to “cowardly” normal citizens? Or why should not everyone use all the platforms they can access, to voice their views?

A few dozen “brave” activists had access to TV studios where they could cast aspersions of men of integrity, who had devoted their life to fighting terrorism, either by facing bullets themselves or by investigating terror crimes in face of extreme danger. Why should then ordinary, millions of “cowardly” Indians also not have a voice on a medium they could access, to express opinion on what they thought of a terrorist?

Or one could simply tell Mehta another truism about social media. There is an innate sense of decency in people, be it in real-life or on social media. They abhor extremes. Additionally, since social media is free and a battle of ideas, people invariably coalesce around the ideas they like and the people who propound those ideas. The self correcting nature of social media ensures that sensible people invariably shun those who talk in the extremes. After all, who wants to be seen being associated with those who incite and provoke? That is why those who consistently talk in the extremes, on any side, have rarely more than a few thousand followers, if at all.

I suspect this is true in real-life as well. That is why, perhaps, the Indian Express has subscription numbers which would make even a newbie on social media, with barely few thousand followers,  blush in the comparison of plenty. As on social media, I suspect in real-life too, people have taken a view after reading the content on the front page and opinion pages of the Express. They have taken a view as to who do they want to subscribe to and who not to. Of course, unlike social media, there is one major difference. Mehta continues to be associated with the Indian Express.