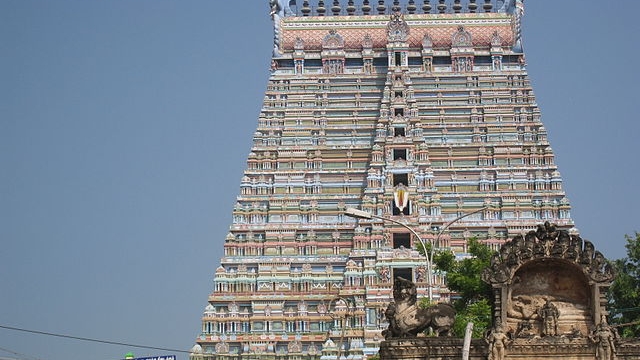 According to a report by a television channel, Thirumavalavan, a rabidly anti-Hindu 'Dalit' politician in Tamil Nadu has recently said that the famous Hindu temples in Sri Rangam and Kanchi were built on Buddhist shrines after demolishing them and hence these Hindu temples should be demolished. These remarks were made in a meeting called to condemn the demolition of the Babri mosque.

This is a propaganda that has been going on from colonial times. To counter the well documented atrocities of Islamist destruction of Hindu temples, the secularists started making the statements that Hindus too destroyed the Buddhist and Jain shrines.

These allegations are actually based on speculations and nothing more. There were definitely conflicts between various Indic sects. There could have been even violent quarrels. Their texts too, often had polemical attacks against each other. However, these attacks were not arrayed as Vedic against non-Vedic.

Conflicts between Jains and Buddhists and also between Shaivites and Vaishnavites are well documented. Yet, they never became holy wars. The Indic spiritual streams never developed the theology of exclusive right to truth and hence the right to eliminate every other. On the other hand, the movement of Indic spiritual sects had always been towards unity while respecting diversity.

Let us take the case of Sri Rangam in this specific instance. The ancient Tamil epic Silapathikaram, which definitely predates the so-called Bhakti movement, very clearly describes Sri Rangam as the abode of Vishnu:

Like a dark blue cloud which without dispersing any other way,

converges to shroud in it the golden peak of a mountain

the same way amidst the roaring waves of Cauveri in Thiruvarangam

in that primordial serpent bed with its thousand hooded heads arising

and with the Goddess of prosperity in His chest

lies He in this auspicious form, worshiped by all including the celestials ...

Despite the mutual literary attacks, debates and even competition for royal patronage, the countless inscriptions and endowments made by the kings in Tamil Nadu show a sustained presence of Buddhism and Jainism.

Even the imperial Cholas, rooted as they were in Vedic Shaivism, gave grants and actively built Buddhist shrines rather than pull them down. Even the staunch Shaivite saint, Thiru Gnanasambandar, put forward the view that the atheist Jain sect was actually part of Shiva's wonderment rather than an evil. In Nagapattinam, the Buddhist shrine built by the Cholas stood as a testimony to Indic universalism, surviving even a tsunami. Built in 1006 CE, it was demolished only in 1867 CE and that was by the Jesuits.

In north India, even in the case of the holiest of the Buddhist pilgrim places, Bodh Gaya, Hindus went out of their way to maintain Bodh Gaya when Islamic invasion threatened it. Dr Koenraad Elst quotes the report of historian Dr. Abdul Quddoos Ansari thus:

The iconoclastic fury of Islam must have [had] a terrible effect on the shrines of the Gaya region, and particularly on Buddhism, with the result that a time came when, there being no Buddhists to look after their own shrines and worship at Bodh Gaya, the Brahmins had to do their work even by going [outside] their jurisdiction.

Dr A Q Ansari quoted by Elst, ‘Ayodhya:The Case Against the Temple’,2002

It is also important to note that the greatest achievements of Buddhist culture and spirituality in India, Ajanta cave art and Nalanda University, reached their zenith under the patronage of kings who were staunchly rooted in the Vedic tradition.

However, the vehemently negative depreciation of Buddhist art came from Marxist theoreticians like D D Kosambi who commented thus on the Ajanta cave paintings:

The multitude of diademed Bodhisattvas, magnificent women in opulent but highly revealing costumes, and their handsome male companions stretched unbroken from Gandhara and Bharhut to Ajanta and Amaravati. No rotting half-eaten corpse, no leprous beggar with festering sores-mars the smooth harmony of sumptuous frescoes and relief’s to remind the monk of the Founder’s doctrine. Nor does the art portray the normal hardships of the poorest villager (pamara), whose surplus the monk could eat, but whose misery was easily discounted on the callous theory that the suffering must have been deserved because of misdeeds in some previous birth.

D D Kosambi, Ancient India: A History of Its Culture and Civilization,1966

The year of publication also has a curious significance because that was also the year the Marxist regime of Mao unleashed the ‘cultural revolution’. The decade starting with 1966 saw frenzied and brainwashed Marxist storm-troopers burning the vast treasure of Buddhist literature and scrolls as well as destruction of Buddhist libraries and shrines. After the destruction of Nalanda by Islamists, Mao’s cultural revolution was the greatest destruction that befell on Buddhism.

One has to remind Thirumavalavan about this recent history because his demagoguery itself was borrowed from more sophisticated arguments forged in the JNU laboratory for the production anti-Hindu hate weapons. Sita Ram Goel, in his rebuttal to Professor Romila Thapar, exposed the utter hollowness as well as the usual ' Suppressio Veri Suggestio Falsi ' nature of this particular line of argument:

It is nobody’s case that Hindu sects (in which I include Buddhists and Jains) did not use strong language vis-a-vis each other. Every Brahminical sect has used strong language about other Brahminical sects. So have the Buddhist and the Jains, not only vis-a-vis Brahminical sects but also about each other. ... I fail to understand the logic of placing Buddhists and Jains on one side of the fence and Brahminical sects on the other. ...Finally I suggest that all cases of Brahminical rulers building and endowing Buddhist and Jain temples and Buddhist and Jain rulers dong the same for Brahminical temples, should also be compiled for obtaining a total picture of the religious scene. You are very prompt in pointing out the few cases where Hindu temples were endowed or built under Muslim patronage whenever large scale destruction of Hindu temples by Muslims is brought to your notice. Why do you always fail to point out the numerous cases Brahminical patronage of Buddhism and Jainism, while listing the few cases of Brahminical persecution?

Unfortunately, Thirumavalavan, who markets himself using Dr Ambedkar, forgets Dr Ambedkar's own indebtedness to Sri Rangam. It was in Sri Rangam Vishnu temple that one of the greatest socio-spiritual reformers of India, Sri Ramanuja functioned. It was on the basis of Sri Vaishnva bhakti that he propagated the practical Vedantic revolution of social equality.

Dr Ambedkar himself had advised the Scheduled communities in particular, and Hindus in general, that in their fight for social democracy, they should 'keep before their eyes the struggles of Gautam Buddha and Sri Ramanuja'. He had further said that 'it was only Ramanuja who courageously and consistently advocated the cause of equality'. Jondhale and Beltz in their study of Dr Ambedkar point out:

Ambedkar thus held Ramanuja to be an apostle of equality. He also recognized Ramanuja’s contribution to the cause of the removal of untouchability and honoured the saints as satya-shodhak, that is, truth-seekers.

A social historian and eminent author Ma. Venkatesan, who is also the head of Tamil Nadu BJP’s SC division, pointed out the following to this writer:

People like Thirumavalavan who want now to make their constituencies believe that Hindus destroyed Buddhist shrines are again doing the same crimes that the left 'distortians' indulged in. The least he could do is to refrain from using the name of Bodhisattva Ambedkar in spreading these utter falsehoods.