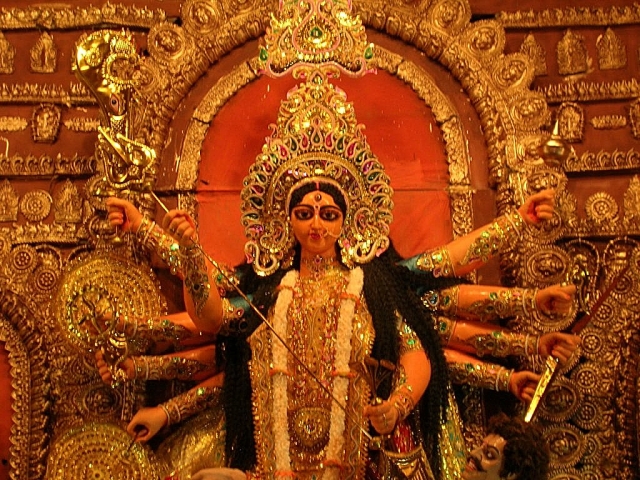 Residents of a village in West Bengal were not allowed to hold the Durga Puja in order to ensure communal harmony.

The 300-odd Hindu families of Kanglapahari village, about 250 kilometres north-west of Kolkata in Birbhum district bordering Jharkhand, are a sad and angry lot. Sad because they could not organize the Durga Puja that they had hoped to in their village. And angry because the administration had allegedly refused to grant them permission to hold the Puja due to objections by some members of the 25-odd Muslim families of that village.

In August this year, we once again approached the Nalhati sub-divisional officer for permission to hold the Durga Puja. But once again, we were denied permission. We came to know that some Muslim residents of our village had voiced their objections on the grounds that since Durga Puja had never been held in our village, doing so now would disturb communal harmony and lead to resentment among the minorities. We believe the authorities took a sympathetic view of their objections and thus refused to grant us permission for the puja….

Rampurhat sub-divisional officer (SDO) Supriyo Das denied that permission was not granted due to objections raised by some Muslim villagers. “Those allegations are not true at all. We didn’t give permission since this would be a new Durga puja and we would not be able to provide security and make other necessary arrangements for this proposed Puja,” he said.

But the villagers countered this argument. “This is not a community or ‘barowari’ puja. We wanted to hold the Puja in the mandap that stands on land donated by a villager. It is private land and not government land. So how can the administration refuse permission to hold the Durga Puja to us?” wondered Sau.

This denial of permission dates back to 2013 when the villagers first wanted to hold the Durga puja in the Durga mandap that stands on a piece of private land. A permanent idol of Goddess Durga is already there at the mandap. So what right do the authorities have to deny permission to hold Durga Puja?  The manner in which the sub-division authorities denied permission is sinister. The villagers formally sought permission from the SDO on August 31 this year and clearly requested in their letter that since time was short (Durga Puja was from October 20 to October 22 this year) and they would need to make all arrangements, the authorities should grant permission immediately. But the letter denying permission was issued only on October 18, on the day of ‘panchami’, so as to deny the aggrieved villagers any chance to seek judicial intervention. If the authorities were sure of their grounds for denying permission, why did they have to resort to such subterfuge?

This (denial of permission to hold a Puja) is a condemnable act and is in keeping with the present state government’s policy of dividing Hindus and Muslims to reap political dividends. We are with the villagers and exploring the options of seeking legal redressal. We’re talking to our lawyers and may file a case in the High Court soon…

Meanwhile, the residents of Kanglapahari are fuming. “We have to walk four kilometers to the nearest Durga Puja celebrations at Bhabanandapur and Haridaspur villages. It has been a long-standing dream of ours to have our own Durga Puja in our village. How can we be denied permission to celebrate out religious festivals? The authorities should then also deny permission to other communities to observe their religious festivals,” said Phulkumari Sau, a mother of three and resident of the village. This incident has created a sharp divide between Kanglapahari’s Hindu and Muslim residents who had been living in harmony for decades.