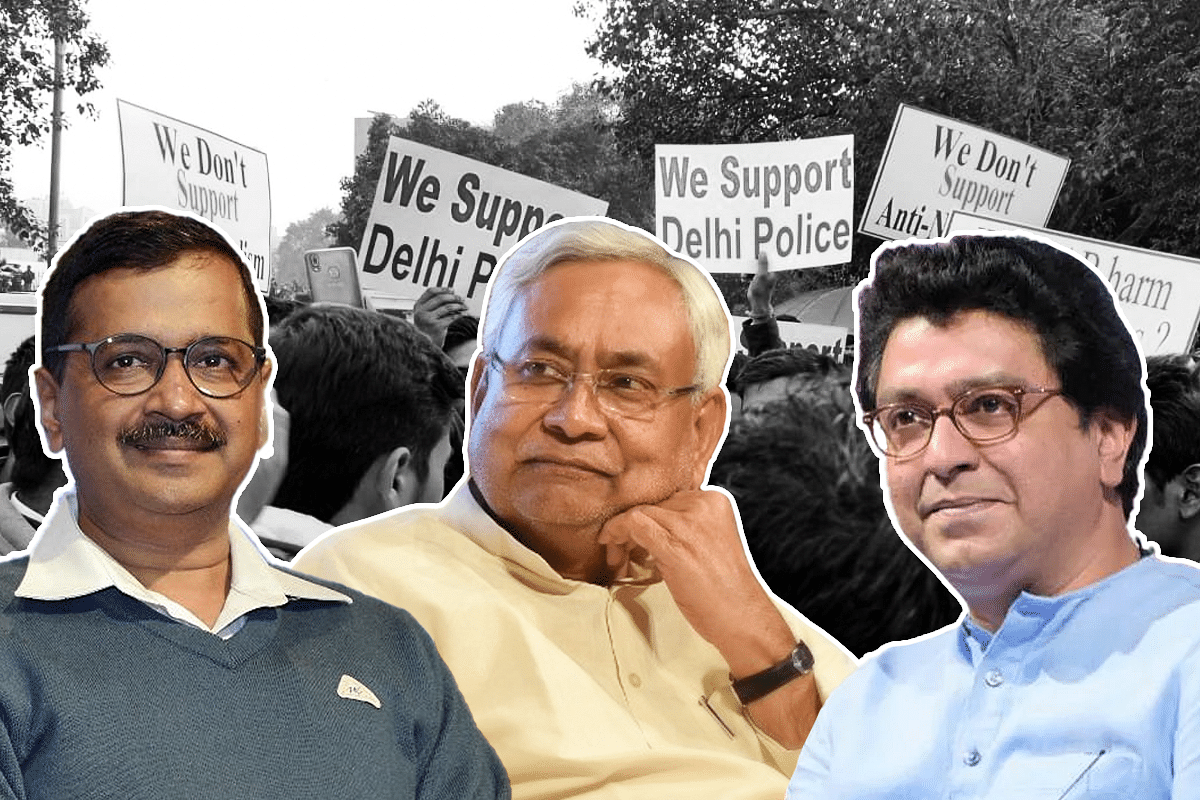 It is always more difficult to hear the silent screams of the majority than the loud protests of a vocal minority. This seems to be the case with protests against the Citizenship Amendment Act 2019 (CAA).

For the last seven weeks, we have been fed stories about how the anti-CAA protests have been gathering steam, when the reality is that the media hasn’t talked to those who silently backed the CAA, but were intimidated into silence by aggressive Left-Islamist rhetoric.

But, if you are a politician with your ears to the ground rather than eyes on the mainstream TV channels, you can hear those other voices too. From Arvind Kejriwal to Nitish Kumar to Raj Thackeray, some politicians are picking up the growing murmur of support in favour of the CAA.

While the Aam Aadmi Party (AAP) did not back the CAA in Parliament, Kejriwal has been refusing to take on the Centre on this issue despite vocal anti-CAA support on the street. In fact, even though his Deputy Chief Minister, Manish Sisodia, spoke in favour of the Shaheen Bagh protests by Muslim women, Kejriwal’s more nuanced statement, made to a TV channel recently, took everyone by surprise. “Everyone has the right to protest peacefully on any issue under Article 19 of the Constitution, but it should not create any problem for others,” he said.

This is not a statement even Amit Shah would have a problem with, and clearly Kejriwal does not want to alienate the majority community ahead of the Delhi assembly elections on 8 February.

Another straw in the wind is Nitish Kumar’s irritation with Pavan Varma, who has been carping about the Janata Dal (United) stand on the CAA, first by voting in its favour, and then for keeping quiet on the protests. Kumar, who faces an assembly election later this year in alliance with the Bharatiya Janata Party (BJP), yesterday (23 January) asked Varma to take a walk if he was unhappy with the party’s stand on the CAA. This means that the JD(U) will stick with the BJP on the CAA.

Another sign of the shifting mood over CAA came from the Maharashtra Navnirman Sena (MNS) of Raj Thackeray, cousin of Shiv Sena chief and Maharashtra Chief Minister Uddhav Thackeray. Raj, nephew of Bal Thackeray, has the same fearsome rhetoric of his late uncle, but has been unable to find much support in the state as the Shiv Sena controlled both the purse and the politics of Hindutva.

Now, with the Sena combining forces with the Congress and the Nationalist Congress Party, Raj Thackeray senses a vacuum in the state, and has enthusiastically embraced both Hindutva and the CAA, not to speak of the traditional Marathi manoos card.

Yesterday (23 January) Raj Thackeray dumped the party’s old multi-coloured flag in favour of the Bhagva, with Shivaji’s core tenets embedded in it. He started his address to the party convention in Mumbai with a reference to his “Hindu brothers and sisters”. He talked about “expelling” intruders from Pakistan and Bangladesh, and backed the CAA. His party proposes to hit the streets in favour of the CAA on 9 February, meeting the anti-CAA street protests with a pro-CAA street protest.

Clearly, he is eyeing the Hindutva space vacated by his cousin Uddhav, and many erstwhile Shiv Sainiks, schooled in the rough-and-tumble university of Bal Thackeray’s street politics, might well see him as the true inheritor of the late Thackeray rather than the son.

Put these things together, and it would appear that many politicians with their ear to the ground are sensing a different mood among the silent majority than what is seen in the loud anti-CAA rhetoric tomtommed by the media.

The tide may be turning.