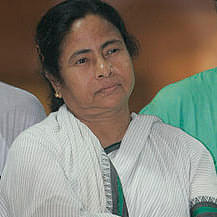 Will the polls be conducted before the CBI reaches Mamata Banerjee’s doorstep sniffing out her probable involvement in Saradha scam and Goddess Durga, whom the chief minister has faith in, leaves inauspiciously?

Before this year ends, Mamata Banerjee may be firmly ensconced in her chief ministerial chair for another five years. Buoyed by the ‘more than expected’ results in the recent civic elections in Bengal, Banerjee is seriously considering the prospect of cashing in on the momentum generated by the victory by bringing forward the state Assembly polls due for May next year.

The sweep of the civic polls by the Trinamool has motivated party cadres and considerably strengthened the party. Banerjee wants to capitalise on that and call for early elections in the state. But there are other reasons as well. The Chief Minister is wary of the CBI investigations into the Saradha scam revealing more skeletons from her cupboard. She does not want to wait till next summer when the central investigation agency is likely to start filing charge sheets.

She knows that many in her party are guilty of connivance, complicity or direct involvement in the ponzi scandal and the investigations may implicate her as well. Such a development would be disastrous for her and seriously mar her party’s prospects of returning to power for the second time.

Banerjee has, in fact, put in motion the process of holding elections towards this year-end when the festive cheer is on, in Bengal. Over the next couple of months, she will undertake extensive tours of all the districts and not only address public meetings there, but also hold intensive meetings with district administration officials to monitor and review development plans and projects. A special cell is being constituted in her office to constantly monitor all projects across the state. She has set fixed deadlines for completion of the projects and had issued strict instructions to bureaucrats to stick to them. It is during one such review meeting with top bureaucrats that she told them that “time is short” and they should be prepared for early polls in the state.

Banerjee has also started building bridges with the Union government and the NDA to keep the CBI at bay and save her own skin. During the campaign for the Lok Sabha elections last year, she repeatedly hit out at the then prime ministerial candidate of the BJP, Narendra Modi, and even went to the extent of saying that she would tie him with a rope and drag him to prison. For many months since Modi became Prime Minister, she did not meet him and continued to breathe fire against him and his party. But she has changed track, since, she now realises that the danger of CBI investigators reaching her doorstep is real.

The CBI has started unearthing a lot of evidence that could implicate her directly in the Saradha scam. The reported purchase of one of her paintings at a whopping Rs 1.26 crore by Saradha chief and scam mastermind Sudipta Sen is enough for her to be summoned for questioning. She may try to explain that she has no control over who buys her paintings at whatever price at auctions, and that she had donated the money to the party, but she is intelligent enough to know that such an explanation would cut no ice.

Photographs and news footage of Banerjee walking into or out of the CBI office in Kolkata being telecast repeatedly by news channels and splashed across the front pages of newspapers would deal nothing short of a death-knell to her poll prospects. Her expected assertions and allegations of a “conspiracy” against her and her party would, she knows, not wash with the electorate. So she desperately wants to avoid this prospect itself. The only way to do so, she feels, is to change her rabid stance against Modi. Thus, from confrontation mode she has slipped quietly into cooperation mode. Not only has the Trinamool extended support to some of the Bills introduced by the government in the Rajya Sabha, the party has also promised support to the GST Bill and the India-Bangladesh land boundary agreement bill which she was vehemently opposing earlier. She has also tacitly promised support to the government in passing bills in the Rajya Sabha where the NDA lacks the numbers. TMC party spokesperson Derek O’Brien on record says that the party would consider extending support to the NDA, in future, to get Bills passed in the Upper House “ball by ball, bill by bill”.

That’s not all. Banerjee will, swallowing her monumental ego, receive Prime Minister Modi at the Kolkata airport when he arrives on a two-day visit to the state at the end of this week. She had earlier broken protocol by not receiving Modi at the airport on his previous visit to Bengal after he became the Prime Minister. This time, she will not only be there with bouquets to receive Modi, but also accompany him throughout his stay in the state. Speaking to media persons earlier this week, she said she had sought an appointment with Modi during his stay here to apprise him of the progress of various development and social welfare projects in the state and demand more funds for Bengal. While it is certainly good that she is now engaging in constructive cooperation with New Delhi, one cannot but help gather the impression that she is doing all this only to save her own skin rather than out of realisation that such cooperation is required for Bengal’s own benefit.

Yet another factor that could perhaps be weighing on Banerjee’s mind is the arrival, as is believed by Bengali Hindus, of Goddess Durga from her abode in Mount Kailash to her maternal place this year (which marks the beginning of Navratri) on a horse. This signifies political instability ahead. Banerjee may want to avoid that possibility by holding the polls before the Durga Puja this year — most likely after Vishwakarma Puja in mid September. Banerjee, for all her wooing of minorities and wearing a hijab at times, is religious as well as superstitious. Also, the goddess will be departing in a palanquin for Kailash and that, too, bodes ill — according to the believers, it signifies floods or droughts and other natural disasters. By renewing her tenure for another five years before such disasters strike, she would insure herself from the likely adverse fallout of such crises.

All said, it thus makes eminent sense for Banerjee to resign and call for early elections.