Everything You Needed To Know About The Navy's International Fleet Review 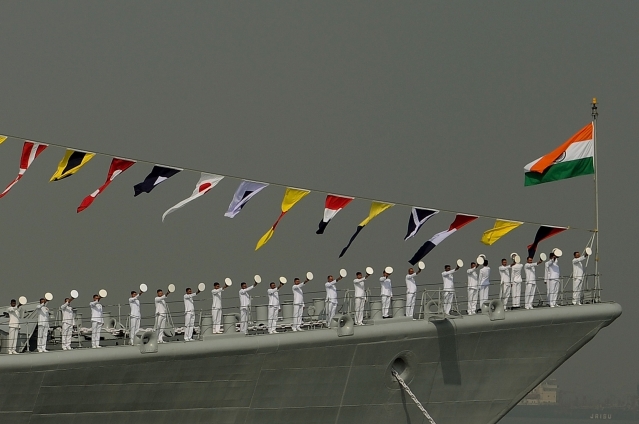 A quick introduction to the grand tradition of fleet reviews and what you can expect to see at the International Fleet Review hosted by the Indian Navy.

“Whoever rules the waves rules the world,” said US Admiral, Alfred T Mahan, described as “the most important American strategist of the nineteenth century.”

It is billed as the largest ever gathering of warships on the Indian coastline.

In a spectacular show of maritime strength and solidarity, over 70 warships and allied craft from India and 20 other nations will proudly strut, preen and rule the waves off the coast of Visakhapatnam on February 4-8 in the Bay of Bengal, the world’s largest bay, as part of the International Fleet Review (IFR) 2016.

Here’s a primer on what to expect and look out for:

In the air, there will be flypasts and aerobic displays by Naval aircraft including helicopters (Chetak, Kamov, Sea King and the Dhruv, the home-made Advanced Light Helicopter), fighters like the MiG 29K and Sea Harriers, the Hawk advanced jet trainer, and recon, patrol and anti-submarine warfare aircraft like the Ilyushin 38, Dorniers and Boeing’s Posedion P8I.

“54 countries have confirmed their participation. 24 warships from foreign countries and 24 foreign Naval chiefs and 90 other foreign delegates will be attending IFR,” according to Indian Navy sources.

On the ground, there will be parades and floats by school students and the Navy, including a show by the feared special forces called MARCOMS or Marine Commandos. Look out for the Maritime Exhibition and IFR village at the Andhra University grounds. With a “make in India” theme, it will showcase “Innovation, Indigenisation and potential of the youth of our country. Participation by industry under the categories float, move and fight, has been planned.” Folk dances and music from across the country will lend to the festive air.

There will be a wreath-laying ceremony at the 1971 War Memorial, off RK Beach Road, on February 4, followed by the traditional press conference by the chief of naval staff, Admiral RK Dhowan, PVSM, AVSM, YSM, ADC, at the Novotel Hotel on the morning of February 5. Officials and heads of delegations of participating navies will also be in attendance at the official opening ceremony in the evening. It will have “performances by renowned artists stitched together by a common theme of ‘seas/ oceans’, …to start the IFR in a festive and celebratory mood,” says the Navy.

The actual fleet review will begin at 9 a.m. the next day, when President Pranab Mukherjee, will board the Presidential Yacht, INS Sumitra, after a ceremonial guard honour and 21-gun salute on the wharf.

The presidential fleet, offshore patrol vessels comprising INS Sumitra, INS Sumedha, INS Saryu and INS Sunayna, will then sail past the ships lined up in six columns out on the high seas, with sailors lined up on deck saluting with a triple “Rashtrapati ki Jai.”

Apart from the newly acquired INS Vikramaditya and the outgoing INS Viraat, the navy’s two aircraft carriers, look out for the USS Antietam (CG 54), the whopping 10,000-tonne Ticonderoga-class guided-missile cruiser. Also, keep an eye out for the INSV INSV Mhadei (A76) – the Sailing Vessel which has sailed around the world twice on sails alone, clocking more than 1 lakh nautical miles since its induction in February 2009 – and INS Nireekshak, the Indian Navy’s only Submarine Rescue and Saturation Diving Vessel.

President Mukherjee will also review a flypast and aerobatics display by the navy’s air arm (look for the distinctive wedge shape of the MIG 29 K) comprising over 45 aircrafts. Led by Flag Officer Naval Aviation Rear Admiral PK Bahl, the flypast will present 15 breathtaking formations, including two by the Indian Coast Guard.

The next day, Prime Minister Narendra Modi will review a colourful skydiving exhibition by 24 Members of the marine commandos. The first one to touch the ground will present a book on India’s Maritime Heritage to the Prime Minister, who will formally release it later in the day.

In his last radio address, Mann Ki Baat, Prime Minister Narendra Modi described the International Fleet Review as “big opportunity” for India. “It is a matter of pride that India is hosting a big event in the first week of February. The whole world is coming as a guest, and our navy is preparing for it,” he said. “This is an attempt to establish a consonance between our military power and the military powers of the world. This is a joint exercise… a big opportunity,” he said. “Land boundaries divide us, but the water, the ocean, unites us. ”

“Nearly 70 years after Independence, it is a significant moment in country’s maritime history. This is the eleventh Fleet Review but only our second International edition. While showcasing our Navy to the nation and our sovereign, we also celebrate the time enshrines principles of friendship across the oceans that are intrinsic to our seafaring community,” said Chief of Naval Staff, Admiral R K Dhowan.

The closing ceremony will take place from 7 p.m. to 9.30 p.m. at the Naval Institute on February 8 and passage exercise—where visiting warships are escorted out to sea by Indian ships, and a Sail in Company on February 9.

What is the IFR?

Every President of India, as Supreme Commander of the armed forces, takes part in a review of the fleet once during his or her tenure.

Ten reviews have taken place in India since 1947.

This is the 2nd International Fleet Review in India, with the last one held on the Mumbai Coast in 2001, in which 29 countries took part.

This is the first time that Ships from China and Latin America will take part in this event. Pakistan, which ignored the earlier review, will not participate in this one either despite an invitation. The three Chinese ships from the 21st task force that had earlier raised red flags in India by docking in Colombo had also engaged in an exercise with the Pakistan Navy just before that.