Explained: Everything You Should Know About The Bharat Bandh 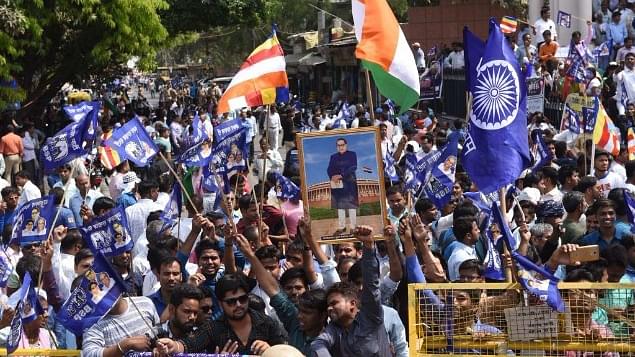 Chaos reigned across many states in India on Monday (2 April) as Dalit organisations called for a Bharat bandh. With nine people dead in individual acts of violence, six in Madhya Pradesh alone, the Army had to be called in various states to control the situation. In Punjab, Class 10 and Class 12 examinations had to be called off owing to the protests, while scattered instances of rioting were also reported.

The bandh was called against the dilution of the Scheduled Castes and Scheduled Tribes (Prevention of Atrocities) Act.

What is the Scheduled Castes and Scheduled Tribes Act of 1989?

To eliminate the prevalent discrimination against the Scheduled Castes (SCs) and Scheduled Tribes (STs) across India, the Untouchability (Offences) Act, 1955, was passed a few years after independence. Renamed as the Protection of Civil Rights Act in 1976, it was further amended in 1989 as the Scheduled Castes and Scheduled Tribes (Prevention of Atrocities) Act. The idea behind the amendment of 1989 was to make the law more stringent in cases where SCs and STs had been discriminated, abused, harassed, or humiliated, or tormented in any other way.

The National Democratic Alliance (NDA) government, in 2015, made some amendments to the Prevention of Atrocities Act including recognising actions like tonsuring of head, moustache as offences. The offences also included denying access to irrigation facilities, garlanding with chappals (flip-flops), forcing to dispose or carry animal or human carcasses. Thus, this made the existing law even more comprehensive.

In Dr Subhash Kashinath Mahajan v/s The State of Maharashtra, the Supreme Court was hearing Mahajan’s petition filed against an order of the Bombay High Court dated 5 May 2017. Dr Mahajan, serving as the technical director of education in Maharashtra, was accused by a junior in the same department under the Prevention of Atrocities Act for passing casteist remarks. In its order, the Bombay High Court refused to quash the first information report (FIR) against Dr Mahajan.

In its directive on 20 March 2018, the top court came out in support of public servants, who are otherwise accused of tormenting the SCs and STs and other private citizens. According to the directive, action against the former would require the written permission of their appointing authority while verification from the Senior Superintendent of the Police would be necessary in the case of the latter.

Besides, the directive also included having an anticipatory bail where the case was “motivated in bad faith”, as several instances of the law being misused had been reported since it came into being. Other guidelines warranted a preliminary enquiry before an FIR was registered, recording the reasons for arrest, if any, and giving them to the person arrested and the court, as they would be instrumental in deciding the extent of the detention.

Immediate Reaction of the Dalit Organisations

Fearing the dilution of the Act and interpreting the guidelines as a threat to their security, the Dalit organisations, across India, called for a bandh yesterday (2 April) against these directives of the top court. Terming the law to be without power now, the protesting groups expressed their anger as they felt that the powers of arrest had been shackled with this directive.

The judgement was delivered on 20 March 2018 by the Supreme Court. However, the Centre filed a review petition on 2 April, delaying the necessary action by two weeks.

Earlier, the Dalit Shoshan Mukti Manch had requested the Centre to do the same, saying the dilution in the stringency of the Act could allow for greater incidents against Dalits and would lead to a miscarriage of justice. The Manch further added that the conviction rate for cases registered under the 1989 law is low and there are considerable delays in the investigative and judicial procedure.

How the Bharat Bandh Impacted Cities Across India

With nine people killed in scattered incidents of violence across India, and over 200 detentions, the bandh impacted routine life across several states. In Punjab, rioting was reported from the areas in vicinity of the state capital, Chandigarh, as the mob took to roads. Two people were killed in Uttar Pradesh, one each in Muzaffarnagar and Meerut.

Many states ordered the closure of educational institutions and curtailed mobile internet services to curb the spread of misinformation. As the protesters took to the railway tracks in Madhya Pradesh, Rajasthan, Bihar, and Punjab, along with other states, over 100 trains were reported to be affected. Vandalism was reported from several areas as cars, buses, and other public properties were torched.

From Gwalior, a video went viral online where a man was seen firing into the crowd. Clashes with the police force and open firing were reported from other states too. Section 144 had to be imposed in many cities, as the paramilitary forces and the Army were called in as a preventive measure to ensure adequate security.

How Have the Non-Dalit Organisations Responded?

Several members of the Karni Sena were seen to be in direct conflict with Dalit groups in Rajasthan, making the situation harder to control, as the Inspector General of Police, Jodhpur range, was quoted in many reports.

On the other hand, leaders of the Maratha community warned the government, saying they would relaunch their agitation if a review petition was filed against the Supreme Court directive. Welcoming the apex court’s ruling, they stressed their readiness to hit the streets again with greater aggression, similar to the morchas they had carried out in 2016 and 2017.

In conversation with Swarajya, Dalit columnist and commentator Guru Prakash Paswan said the government must realise that this is the right time to bring in a white paper on policies directed at the SCs and STs, including the law in question. Once the data on its use and misuse is put out there on the authority of the government, he said, we can then have a serious debate on it.

Asked about the political ramifications of the bandh, he remarked that while it would be too early to comment, all social movements do have a political aspect. However, he added, Dalits see themselves as part of Hindu society and he did not expect that they would align with anyone whose policies are seen to be anti-Hindu.

How Have Political Parties Responded?

The Bharatiya Janata Party (BJP)-led NDA government filed a review petition in the Supreme Court. Home Minister Rajnath Singh tweeted: “I am deeply pained by the acts of violence and loss of precious lives in some parts of the country today during protests in context of the Scheduled Castes and Scheduled Tribes Prevention of Atrocities Act”.

The Congress’ Rahul Gandhi was quick to attack the government, saying it was in the DNA of the BJP and the Rashtriya Swayamsevak Singh to demean and suppress the SC and ST communities. Bahujan Samaj Party president Mayawati was quoted saying, “I support the protest against the SC/ST Act. I have got to know that some people spread violence during the protests, I strongly condemn it. Our party is not behind the violence during the protests.”

Delhi Chief Minister Arvind Kejriwal tweeted: “Under the situation resulting due to Supreme Court's decision on SC/ST Prevention of Atrocities Act, AAP is with the movement of SC/ST community. Central government should deploy top lawyers for the petition in the Supreme Court and the need and fundamental intent of the Act should be preserved.”

While the protests have been used by regional parties and the Congress to attack the Centre, political parties have been in unison in their pursuit of a review petition before the Supreme Court against the directives.

With the violence consuming innocent lives, including that of a young child, all eyes would be on the Supreme Court for swift action on the petition filed by the Centre.