This Is Why Bangladeshi Fugitives Find Safe Haven In Bengal 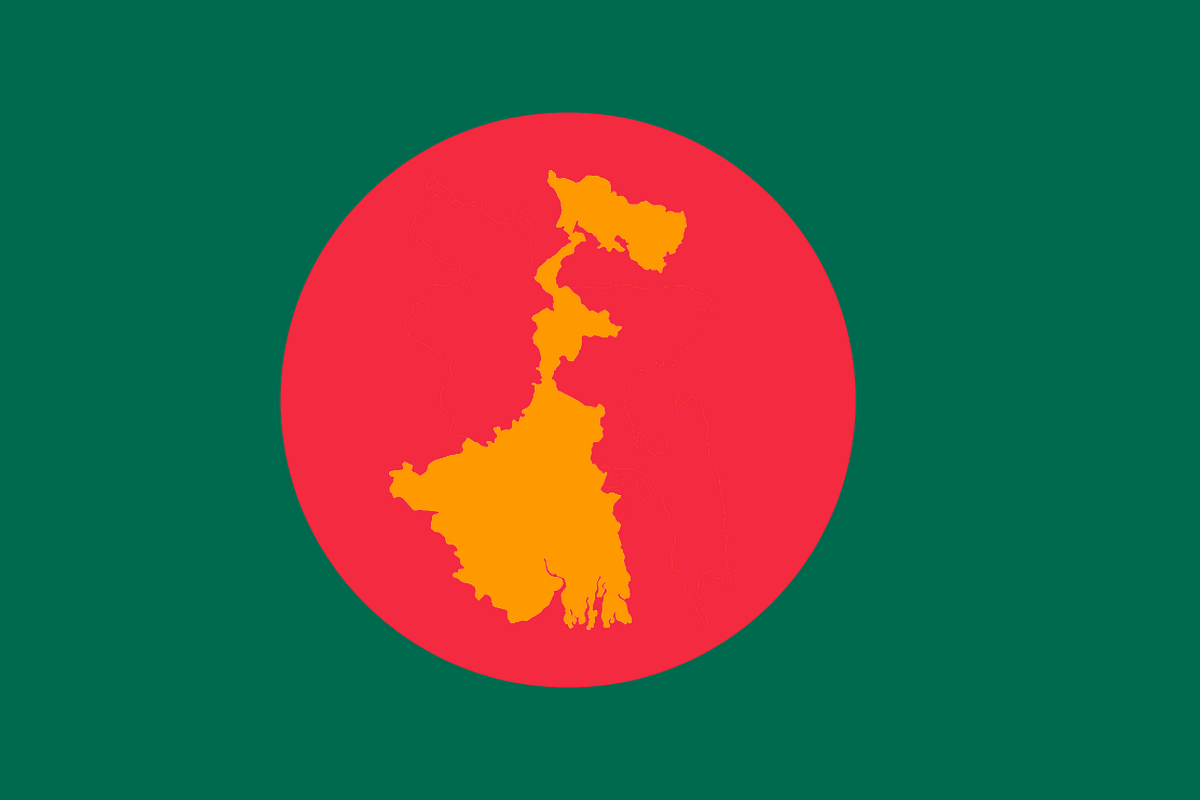 Map of West Bengal on a Bangladesh flag.

The arrest of two killers of Bangladesh’s founder Sheikh Mujibur Rahman within a span of less than a month from Bengal raises serious questions about the state’s internal security situation.

The two fugitives were not the first men on Bangladesh’s most-wanted list to be picked up from Bengal, and won’t be the last either.

According to Indian and Bangladeshi intelligence agencies, many fugitives from Bangladesh are hiding in Bengal. What’s more, they have genuine Indian documents like voter ID cards, Aadhaar cards and even passports. And many of them have married and raised families here.

Top officials of the Intelligence Bureau (IB), the agency that tracked down Abdul Majed — a former captain of the Bangladesh Army who was one of the assassins of Mujibur Rahman and his family — said that the ease with which the fugitive was living in central Kolkata was shocking.

Majed, who was sentenced to death in absentia by the Bangladesh High Court many years ago (the sentence was ultimately executed 12 April), had been living in Bengal for 23 years and had obtained an Indian passport three years ago. He had married a widow 33 years younger to him and was a school teacher.

Another assassin of Mujibur Rahman and his family, Risaldar Moslehuddin, was nabbed from Bongaon, a town near the India-Bangladesh border in Bengal’s North 24 Parganas district. He also had married a local girl 25 years younger to him and used to sell Ayurvedic and Unani medicines at a local pharmacy there.

Moslehuddin, who was handed over to Bangladesh two days ago, had also been living in Bengal for more than 20 years and had registered himself as a voter here, besides obtaining Aadhaar and ration cards.

The National Investigation Agency (NIA) discovered in early February this year that Mohammad Salauddin, one of the main accused in the July 2016 Holey Artisan Bakery attack in Dhaka, had been hiding in Bengal.

After the crackdown on the Islamist terror outfit Jamaat-ul-Mujahideen Bangladesh (JMB) in Bangladesh, most of its top leaders fled and found safe haven in Bengal. Some of them were involved in the accidental bomb blast in Burdwan’s Khagragarh in 2014 and convicted in 2019.

Many JMB terrorists have been traced and picked up by the NIA and IB in recent years from Bengal and other parts of the country.

Why is it so easy for fugitives from Bangladesh to find safe haven in Bengal and even become Indian citizens? For precisely the same reason, say IB officials, that the millions of illegal Muslim infiltrators from Bangladesh have entered, been welcomed and settled down in Bengal for so many decades now.

The political leadership of Bengal — first the Congress, then the Left and now the Trinamool — have encouraged this infiltration for their narrow political gains. Over time, a strong eco-system that protects all illegal Muslim migrants from scrutiny and surveillance, and facilitates their obtaining Indian citizenship, has taken very firm roots in Bengal.

“There exists a well-oiled machinery and an established protocol in Bengal that not only protects illegal Muslim migrants from Bangladesh, but also helps them obtain India’s citizenship documents on the basis of fake documents, vote in Indian elections, buy land, and get government jobs and benefits. This happens under the active patronage of political parties and local politicians who look on this large body of Muslim immigrants as vote banks,” explained a senior IB officer.

The IB officer also explained that this ecosystem, whose nodal points are Left-leaning academics, intellectuals and artistes and ruling politicians, ensures complete protection to all illegal Muslim immigrants in the name of (pseudo) secularism and ‘protection of minorities’.

Over time, the millions of Bangladeshi-origin Muslims, who have settled down in Bengal as Indian citizens have become politically and socially powerful, and wield enough clout with the state administration to ensure complete protection for their co-religionists who continue to sneak in from Bangladesh.

Over the last few years, a large number of the progeny of Bangladeshi-origin illegal immigrants in Bengal have reportedly got state government jobs — in the civil administration and police. These low and mid-ranking state officials now form a strong line of defence in favour of their co-religionists who have entered India illegally in recent times.

“Under the patronage of ruling (Trinamool) politicians, as well as those of the Congress and the Left, a big section of the state administration protects the new Muslim immigrants and provides them all the required protection from scrutiny and surveillance. That is how Abdul Majed (Mujib’s assassin) got an Indian passport,” said a senior BJP leader.

“The fact that he obtained an Indian passport represents a complete failure on the part of the state police who are supposed to diligently verify the credentials of every passport applicant. The Bengal police okayed the fake credentials of this most-wanted man from Bangladesh who killed the founder of that nation. What can be more shameful than that,” said the IB officer.

Also, the fact that the Bengal government has not initiated an enquiry into how this killer of Mujibur Rahman obtained a passport and which police officer verified his credentials speaks volumes about the protection that the state, and prevailing ecosystem in Bengal, accords to illegal Muslim immigrants from Bangladesh.

“The Bengal government will never initiate such an inquiry. It will also not hold an enquiry into how another killer of Mujibur Rahman (Risaldar Moslehuddin) got ration, Aadhaar and voter ID cards and punish the officials who were responsible for that. Facilitating the enrolment of foreigners in the voters’ list and giving them Indian documents is a grave crime against the nation and should attract very strong punishment. But that will never happen in Bengal,” said the BJP leader.

IB officers say that while illegal immigrants from Bangladesh gain easy entry into Bengal through the porous borders, it is their Bangladeshi-origin co-religionists who shelter them. “After that, the state machinery and the politicians protect them and give them documents,” said the IB officer.

The much-required surveillance on such illegal Muslim immigrants can never take place in Bengal, add the IB officials, because of the ecosystem in the state that protects these immigrants.

Any attempt to mount surveillance on them will get branded and vehemently opposed as targeting of minorities. And that is why Bangladeshis — fugitives or otherwise — continue to thrive in Bengal and will continue to sneak into the state because it is the safest haven for them.