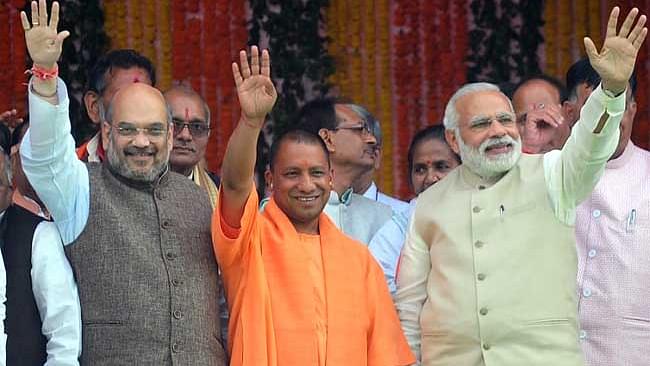 BJP President Amit Shah, Yogi Adityanath and Prime Minister Modi at an election rally in UP.

Almost a month after the declaration of the Assembly elections’ results for five states of Uttar Pradesh (UP), Uttarakhand, Punjab, Goa and Manipur, many are still inquisitive as to why pollsters failed to capture the mood of the people correctly, especially in UP. Even the most optimistic estimates did not give the BJP more than 285 seats (News 24) in the state; India Today (251-279), Times Now (200), ABP News-CSDS (164-176) and India TV (155-167) were all wide off the mark.

Why such an error in judgment?

While many psephologists and pollsters are demoralised and some have even jumped to suggesting that we may have to find some other method in place of opinion poll surveys to gauge the people’s preferences, I think this kind of panic is misplaced.

There are certain things one must understand to appreciate the success and failure of the art and science of psephology. Even the most developed and sophisticated branch of the discipline, that is in the USA, failed miserably to predict the outcome of the presidential contest between Hillary Clinton and Donald Trump in November 2016. Let us not forget too that psephological predictions in the past have been on the dot many times.

There are several factors in psephological predictions. One is concerned with the methodological parts of the process. This includes the sample size of respondents, sampling method, framing of the questionnaire, drafting the code book, imparting training to research team, checking ethical violations in fieldwork, data entry and analysis, conversion of vote share into seats etc. In spite of precautions, something can go terribly wrong at any step and spoil the quality of data and outcome.

The second is the cultural and human factor. This involves requirement of honest revelation of voting preferences by respondents. In Europe and USA, most interviews with respondents are conducted through telephone or emails, giving respondents the ease of answering in privacy. In India, as 70 per cent of the respondents live in rural areas, disclosure of political preferences and other responses are usually in presence of a small crowd of villagers, neighbours or family members. So, on many occasions, the respondents may not reveal their correct voting preferences. But, our experience is that, usually, such incorrect revelations are balanced and cancel themselves out across parties so that the net outcome comes within a recognised limit of 2 per cent margin of error.

Obviously, the above two factors could not have gone wrong to the extent that the vote share predictions for the BJP, as given by the prestigious and research-oriented Lokniti, CSDS, would go wrong by about 10 percentage points. Of course, CSDS outsources the conversion of vote share into seats to Rajeeva Karandikar, Director, Chennai Mathematical Institute, but certainly no one could correctly do the seat conversions if the projected vote share for BJP was so wide off the mark.
Hopefully, CSDS would seriously investigate every step in the entire process to understand if anything went wrong methodologically.

The real question is: why did the CSDS fail to get the vote share for BJP wrong by 10 percentage points? This is important since CSDS data has credibility world over.

An investigation into this leads to the third factor, the silent political undercurrent. The real villain in proving pollsters and psephologists wrong was the phenomenon of the third democratic upsurge in UP that none, including the BJP, could gauge.

Since 1989, subalterns in UP had been voting the caste parties- Dalits voting BSP and Other backward Castes (OBCs) voting SP. They had been used to voting for these parties because of identity politics but this time they were transcending the identity factor and craving for aspirational politics. Their aspirations had taken a flight owing to the promises of Narendra Modi who, as the prime ministerial candidate, had promised many things in 2014 Lok Sabha elections. These sections of the electorate realised that they had given a chance to both BSP (Mayawati) and SP (Mulayam and Akhilesh) in 2007 and 2012 respectively. Hence, it was the turn of BJP to come to power in 2017 and prove that its governance and development were better than that of SP and BSP.

That psychology of subalterns was captured very well by BJP through its strategy of constituency transformation. The party aggressively integrated both the leadership of the subalterns and their common masses into the party’s leadership structure and ticket allocation. That was a game changer in UP in favour of the BJP.

It was backed by a bullish rural policy push by PM Modi targeting the farmers and the rural masses. Similarly, schemes of financial inclusion, direct transfer of subsidy to people’s accounts and social security measures like the Atal pension yojana and Mudra schemes for Dalit and women entrepreneurs greatly empowered the subalterns. They had made up their minds to vote BJP.

But why did they not reveal their voting preferences for the BJP to the research teams of pollsters and psephologists?

Secondly, this change in voting preference was so unidirectional that it did not balance by cancelling out for different parties, rather, it coalesced in favour of just one party, the BJP. That was proved by one unique tendency that we encountered during fieldwork this time: many respondents, after having revealed their voting preferences for SP or BSP, would chase the researcher after sometime and whisper that s/he actually did not vote SP/BSP but BJP. During our field work of the past twenty years, we had never experienced this kind of behaviour of the respondents.

The same was true of the Muslim female respondents. The issue of triple talaq had really impacted them deep. They were all actually concerned about their plight but were afraid of their male counterparts in raising the same. So, they did not reveal their voting preferences before their family members. Even in Hindu families, traditional supporters of SP or BSP, women did not take dictate from their males and voted BJP on issues of women security and village sanitation drive. That’s why many deliberately concealed their voting preferences for BJP in a unidirectional way.

Thus, both subaltern castes and Muslim women consciously concealing voting preferences for BJP produced a cumulative vote share for the party that could not be captured in the fieldwork data. And, that proved pollsters wrong. But, the show must go on as addressing the curiosity and interest of people is an essential ingredient of a vibrant democracy. To err is human, but getting the opportunity to improve and correct oneself is rationally human.