Why ECI Must Act Against Mamata Banerjee For Threatening Central Forces, Violating Code Of Conduct 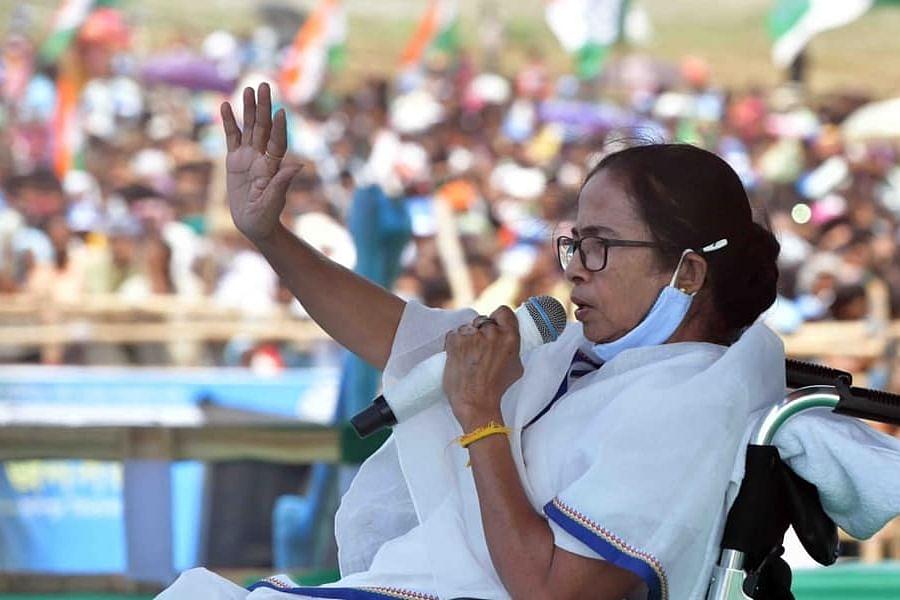 The Bharatiya Janata Party (BJP) has lodged numerous complaints with the Election Commission of India (ECI) accusing Trinamool Congress chief Mamata Banerjee of violating the model code of conduct and attempting to rig the ongoing assembly elections in Bengal.

The ECI has, so far, not taken any action against Banerjee. And perhaps emboldened by it, Banerjee on Friday (2 April) issued a direct and dire threat to the central forces deployed in the state on election duty.

Accusing the central forces of “terrorising and torturing” villagers, she said at an election rally in Cooch Behar that cases will be lodged against them.

Banerjee added that 63 specific cases had been lodged against personnel of the central armed police forces (CAPF) who were on election duty, and more would be lodged.

The Trinamool chief boasted that she herself had lodged one case against a central force officer who, she alleged, had the “audacity” to tell her to go away when she was entering a polling booth in Nandigram on Thursday (1 April).

She went on to say: “Amit Shah will flee after two days. We will form the government. If people lodge cases (against central forces), I have no power to withdraw them. Individual cases will be lodged. Every case will be investigated."

What the Trinamool chief meant was that cases of harassment, intimidation, torture and more will be lodged by people (read: Trinamool functionaries and supporters) against individual members of the central forces by naming them in the complaints registered with the state police.

She said that after forming the next government, the state police will investigate the cases against personnel and officers of the central forces.

“This amounts to a direct threat to central forces who are performing their duties. This is unprecedented and a complete and blatant violation of the election code of conduct. What she said was that the state police under her will investigate the cases and summon the accused in the cases (the personnel and officers of CAPFs) repeatedly, and even arrest them,” said an inspector-general-ranked officer who was on deputation to a CAPF.

“It is a different matter that such cases will not stand judicial scrutiny and will be dismissed by the courts. But being summoned by the state police even to register their statements would constitute acute harassment,” said the officer.

Knowing the subservient Bengal police, many apprehend that in the unlikely event of Mamata Banerjee returning to power, she may ask the police to even arrest CAPF personnel and officers.

This will affect their service records and careers. “This grave apprehension will be playing on the minds of CAPF personnel and officers and they will be loath to act as per rules against Trinamool functionaries or supporters who try to break the law and rig the polls from now on,” said the senior police officer.

The ECI had deployed such a huge number of CAPF in Bengal precisely to stop Trinamool cadres from rigging the polls. But the purpose of this deployment is being defeated by Banerjee’s threats and warnings.

So far, the central forces have acted promptly against all attempts to rig the polls and acted strictly against booth jamming, intimidation of voters, and other unfair tactics.

“But if they (the CAPF personnel and officers) now face the prospect of police cases being lodged against them, they will be apprehensive of carrying out their duties fearlessly. They also know how biased the Bengal police is and how the state police act as handmaidens of their political masters. So investigations in cases lodged against them will be inevitably biased and even false charge sheets may be submitted against them. Hence, they may not act strictly against troublemakers or those who attempt to rig polls,” said a former Border Security Force officer.

Banerjee’s warning and threat to CAPF personnel and officers thus constitute a blatant attempt to interfere and influence the poll process and, besides being a challenge to the ECI, amounts to a gross violation of the code of conduct.

The BJP says Mamata Banerjee’s prolonged presence at a polling station in Nandigram is also a gross violation of the model code of conduct.

"As a candidate from that constituency, she can definitely visit a polling booth. But she cannot sit there for hours and say she will not move from there till her supporters get to cast their votes,” said BJP spokesperson Sisir Bajoria.

“Her game plan was to station herself in that booth and influence the police, CAPF personnel, and poll officials there to allow unrestricted entry of her supporters who would then cast false votes. But that did not happen because she could not browbeat the poll officials, CAPF, and police present there. Nonetheless, she violated the code of conduct and so she should be barred from campaigning,” said state BJP chief Dilip Ghosh.

The BJP has also complained to the ECI about Banerjee’s attempts to whip up hatred against people from other states.

“Mamata Banerjee has been exhorting people at all her rallies and meetings to drive away people from Uttar Pradesh and Bihar. This amounts to incitement and causing enmity between people. That is a violation of not only the election code of conduct, but also the law and the country’s Constitution,” said Bajoria.

On Friday, Mamata Banerjee also made an appeal along communal lines. Speaking in North Bengal, she told Muslims not to be misled by Asaduddin Owaisi (of the AIMIM) and Abbas Siddiqui (founder of the Indian Secular Front, a Congress-left ally in Bengal).

She asked Muslims to keep their cool and vote only for the Trinamool as it is the only party that can ensure their welfare.

The ECI was prompt in acting against Himanta Biswa Sarma in Assam for an alleged violation of the election code of conduct. Will it display the same promptness to act against Banerjee and debar her from campaigning?