Farmers Versus Reliance: And Guess Who Are The Real Losers Here? 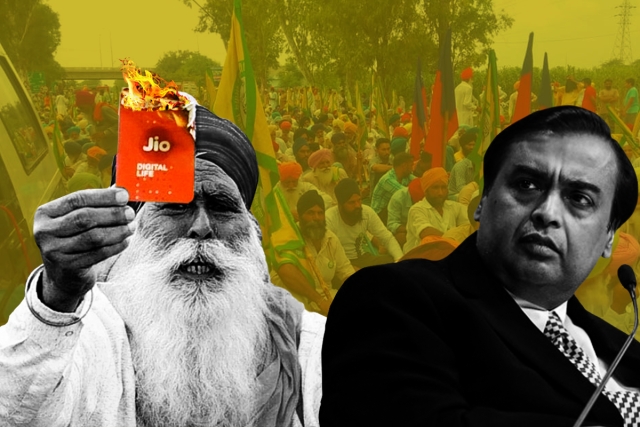 Whatever it is that the farm unions think they are upto, one thing is clear: it is not about defending their interests. They are in an ego tussle with the government over laws that should ultimately benefit them, and if anyone has shown an inclination to compromise, it is the government, not the unions. They are demanding total surrender by the government, which will set the stage for the next confrontation, since they will know that the government can be forced to blink no matter how outrageous their demands.

Nothing demonstrates this better than their repeated assertions that the three farm reforms legislated by parliament are about serving Mukesh Ambani of Reliance.

This has been accompanied by efforts to destroy or incapacitate Jio’s mobile towers in Punjab, which no one can explain how farmers will benefit from. The farmers have not even condemned this act of vandalism, and the Punjab government’s inability to take strong action against the vandals suggests that this is not about farmers at all.

Farmers would benefit from having telecom companies fight for their business; instead, what they have achieved is limited unity of telcos on this act of vandalism. To rebuild and recommission, telecom tariffs may have to rise again.

Yesterday (4 January), even as the unions again refused to compromise on their inflexible demands, Reliance moved the Punjab & Haryana High Court seeking damages and announcing that it will not be entering contract farming or buying land.

In one shot, Punjab’s farmers have alienated a big corporation which could actually have helped them improve their lot by improving farm productivity, and offering them outlets for their produce through Reliance Retail.

But if anyone thinks this damages Reliance, they should think again. Reliance does not need farmers, but the latter do need corporates who can help them achieve stability in incomes.

Even without buying any land or doing contract farming, it would be easy for Reliance to encourage third parties to do this, and then enter into back-to-back contracts with this middleman entity.

The farmers will achieve the exact opposite of what they claim they are against. Now, instead of a responsible corporate that can be called to account, they will be dealing with other kinds of middlemen who will be politically connected and about whom farmers can do nothing about.

The targeting of Reliance makes no sense, for it is just folklore that the government listens to Ambani and Adani, and not anyone else. If anybody knows Narendra Modi, he does not allow anyone to control his actions, not even Ambani.

From 2014, Reliance has got no particular favours from the government, starting with a drastic cut in gas prices to just over $2 per MMBTU, when the UPA had recommended a rate four times that level through the Rangarajan panel.

A few days ago, Reliance was fined by Sebi for insider trading. If anything, Reliance was most comfortable with the UPA government, where the Radia tapes quote Ambani as describing the Congress as “Apni dukaan”.

At a time when no corporate had the money to invest, Ambani was the one who staked the firm by investing more than Rs 3 lakh crore in Jio and Reliance Retail, something that kept the investment cycle moving even if only slowly. More recently, it was Ambani’s bid to bring in big foreign firms to invest in Jio Platforms that enabled the company to not only repay its loans, but to make 2020 the best year for foreign direct investment.

Farmers benefit from having a lot of corporate buyers for their produce, and not just foreign-owned ones like Pepsi, or McDonald’s or Big Basket or Amazon and Walmart.

By targeting Reliance, the farmers have ensured that the one Indian company that could take on foreign giants is being needlessly hobbled. If farmers were against all corporates, the special mention of Ambani gives their partisan and self-defeating game away.

At best, farmers will damage the credibility of this government; at worst they can damage the economic recovery. They are upto no good.

Farmers should also ask themselves if the chorus of political support they are receiving from the Congress and the Left is actually going to help them now or in the future. Even assuming the latter come to power some years down the line, an economic recovery damaged by farmer recalcitrance today will simply not have enough tax resources to buy farm produce at high, above-market MSPs on an extended basis.

Farmers should know better than anyone else that they are chopping the branch they are sitting on. Their egotism is blinding them to reality.