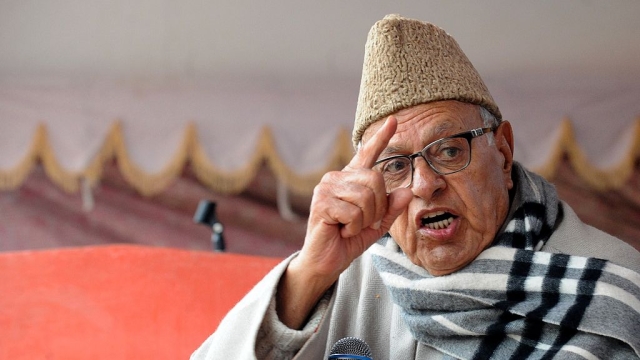 On December 5, there was official holiday in Jammu & Kashmir. It was officially the 111th birth anniversary of Sheikh Abdullah, the father and founder of the National Conference (1932), the premier political organisation of Kashmir.

There is a controversy over the exact date of Sheikh Abdullah’s birthday. His auto-biographer Mohammad Yousuf Taing, a close confidant of the Sheikh and the one who is known for his scholarship in his own right, says that his exact date of birth was January 29, 1905, and not December 5, 1903. He claims that he didn’t mention either of the dates in the Sheikh Abdullah’s autobiography Aatish-e-Chinar because the latter didn’t want it, saying “it will trouble my (sheikh’s) supporters and general masses will get disturbed if I (Taing) do any such act” (Early Times, Dec 5, 2016).

Anyways, date of birth is not the point of scrutiny here; it is what Sheikh Abdullah’s son, three-time Chief Minister of Jammu & Kashmir and president of the National Conference, Farooq Abdullah, on December 5 said at the mausoleum of Sheikh Abdullah on his 111th birth anniversary at Naseem Bagh on the outskirts of Srinnagar, Kashmir.

Addressing the party workers under very tight security, Farooq Abdullah surprised everyone present, as he said something which no one had expected, notwithstanding his recent some very controversial statements, including the statement that Pakistan-occupied-Jammu & Kashmir (PoJK) was not India’s private property and that “PoJK will ever remain with Pakistan and Prime Minister Narendra Modi didn’t have the courage and guts to retrieve the territory under the occupation of Pakistan”. It was a direct challenge to the authority of the Indian State. It was also the negation of the Indian resolve and Article 1 of the Indian Constitution that Jammu & Kashmir as it existed on August 15, 1947, including the territories of Jammu & Kashmir (PoJK and Gilgit-Baltistan) was, is and shall be an integral part of India.

Farooq Abdullah declared his party’s fullest possible support to the Hurriyat Conference, which had been spearheading the so-called freedom movement in Kashmir for more than two decades now, and said that he will direct his National Conference workers to join the movement so that the goal could be achieved.

Pledging unflinching support to the Hurriyat Conference, Farooq Abdullah said: “We are with you (Hurriyat) not against you and we have given our entire lives for this movement. Be united, move ahead and take this movement forward and we are with you…We will never be free until we are united and I am telling National Conference workers not to stay away from this movement”. “In pursuit of the ongoing azadi movement the National Conference is with them (Hurriyat leaders) not against them” (Rising Kashmir, Dec 5 – Latest News).

He didn’t stop just there. He further said: “we are standing by your (Hurriyat) side at this hour. Don’t think of us as your adversaries. We are not your adversaries. We have struggled before and wasted our whole life on this (Kashmir movement). I am telling you from this sacred place: Move ahead, we are with you until you keep treading the right path. And until you can guide this nation on the right path” (Greater Kashmir, Dec 5 – Latest News).

Each and every word that Farooq Abdullah uttered - much to the chagrin of the nation- was self-explanatory. There was no ambiguity whatsoever in what he said. His declaration offering unqualified support to Hurriyat Conference and the anti-India religious movement it had been spearheading cleared all the cobwebs of confusion and established that he and his outfit stood for another communal partition of India.

His unflinching support to the Hurriyat Conference also called the bluff of the National Conference and its leadership that they believed in secular ethos and liberal values.

What Farooq Abdullah said must not be construed as a manifestation of frustration of a party that was virtually decimated by the Kashmiri Muslims themselves in the 2014 general elections and the Assembly elections. (The National Conference scored zero in the general elections and Farooq Abdullah also lost very badly to a novice, Tariq Hamid Karra of the Peoples Democratic Party. It could poll only 11.1 per cent of the total votes polled. It also suffered a massive defeat in the Assembly elections. The National Conference could win only 11 out of 46 seats in Kashmir in the 87-member House. His son and former Chief Minister Omar Abdullah could win only from one of the two “safe constituencies” he contested the election and that, too, with a slender margin of less than 100 votes. Farooq Abdullah’s younger brother, Mustafa Kamal, not only lost his security deposit but also came fifth.)

What Farooq Abdullah said was, in fact, a manifestation of what the Abdullah family all through stood for. Before 1947, the National Conference stood for separation of Kashmir from the Dogra Kingdom. In 1946, it adopted a resolution demanding abrogation of the Treaty of Amritsar (March 1846) under which Kashmir became part of the Jammu Kingdom. And after 1947, it stood for a regime outside the political and constitutional organisation of India. And, this, notwithstanding the fact that Jammu & Kashmir is the solitary State in India which under Article 370 has its own Constitution and a flag and which, unlike other states of the Union, exercises residuary powers.

To be more precise, by making common cause with the Pakistan-founded, funded, directed and controlled Hurriyat Conference, Farooq Abdullah on December 5 only revealed his intentions.

In sum, it can be said that Farooq Abdullah has done a great service to India by revealing what he and his fast declining outfit vouch for. Indeed, the real danger to India was never from Pakistan and Hurriyat; the real danger was from those who would masquerade as secular and nationalists.