Forget The Early Polls; It’s Akhilesh Who May Set The Agenda In UP, Not Modi Or Maya 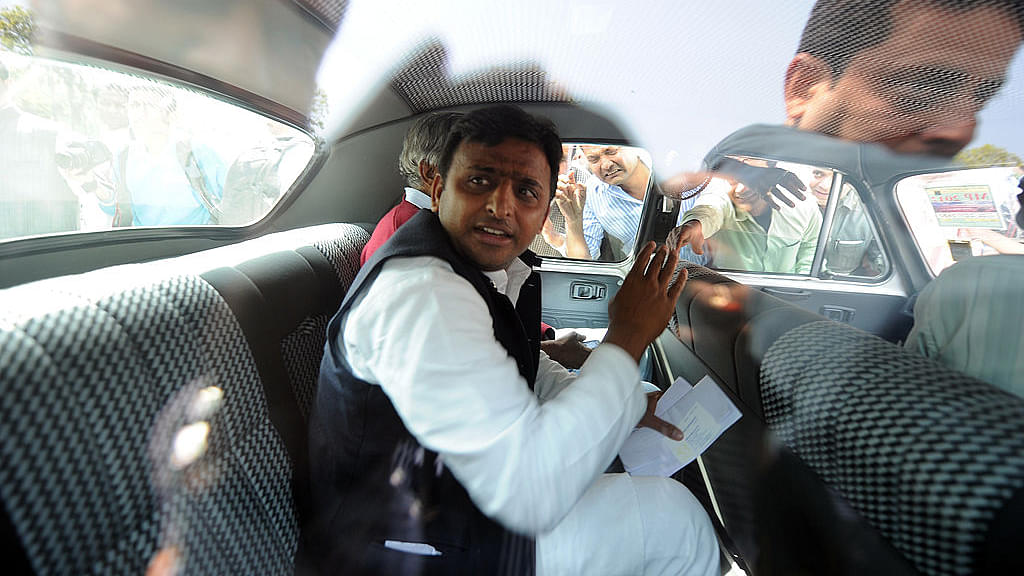 Uttar Pradesh is essentially up for grabs, even though one poll (India Today-Axis) gives the Bharatiya Janata Party (BJP) a crack at majority (206-216 seats in a 403-member assembly), while another (ABP News-Lokniti-CSDS) puts the Samajwadi Party (SP) a nose ahead in a hung assembly, with a seat range of 141-151, followed by the BJP with 129-139.

The reality is that both polls could be wrong, for the agenda for Uttar Pradesh is still to be set. The weakness of every party is apparent, and their strengths yet to consolidate. Even though there is a seven-point gap between the BJP’s vote share (according to the Axis poll) of 33 per cent and SP’s 26 per cent, this gap will close dramatically if Akhilesh Yadav patches together a coalition.

The BJP, despite hard knocks in Delhi and Bihar, has no face for the chief ministership, with Narendra Modi being its sole mascot. If the BJP fails to do well, it will be only due to this failure to produce a face. It could have done so a year back and given the leader time to consolidate, but the party is still stuck in caste calculations and fears offending key castes by naming a leader. We know where this fear got the party in Bihar. The BJP has not internalised this simple message: leadership matters, and the leader’s caste need not be a putoff for other castes.

Some TV channels think demonetisation (DeMo) can also affect the BJP, but by the time Uttar Pradesh heads for the polls (between 11 February and 8 March), the cash crunch will be nearly over. So DeMo will be a vanishing memory. It is not DeMo that Namo has to worry about, but the lack of a party face.

The Bahujan Samaj Party (BSP) has no problems with projecting a leader (Mayawati, inevitably), but it does not have a broad coalition backing it. Its base is limited to a section of Dalits, as the Brahmin community that helped bring it to power in 2007 has now shifted loyalties to the BJP. Mayawati’s only hope is a shift in Muslim loyalties away from the SP, but this depends not on her, but how the SP fixes its internal family feuds. She is leaving no stone unturned to get Muslims to back her this time, but if she achieves this, it will only be because the SP has messed things up.

The smaller parties matter only in pockets. Ajit Singh may play a role in parts of western UP, but the BJP is the rising power here, and Singh may ultimately be confined to the dustbin of history. He needs a strong ally to prop him up.

The Congress has no base worth the name, but it is an important tail for any topdog when it comes to the Muslim vote. In Bihar, the tieup with Nitish Kumar and Lalu Prasad ensured a Muslim consolidation behind the Mahagathbandhan. In Uttar Pradesh, if it aligns with the SP, the Muslim vote will go en bloc to this combine.

This bring us to the most significant factor that will decide which way UP will swing: Akhilesh Yadav.

Akhilesh is currently wrestling his dad Mulayam Singh Yadav and uncle Shivpal Yadav for control of SP, but he should know that the high cards are with him. It is he who signifies change and energises youth in UP, not Mulayam Singh or his brother. This is interesting, for it is Akhilesh who should be facing anti-incumbency after five years as Chief Minister, but his mild manners and positive focus on development after the 2014 drubbing have ensured that none of the party’s recent failures stick to him.

The simple reality of Uttar Pradesh in 2017 is that it is Akhilesh who can set the agenda.

To take pole position, Akhilesh must come up trumps against 3Ms – Mulayam, Mayawati and Modi.

The first battle is the easiest, but also the toughest, for Akhilesh must dethrone his father. He should know that Mulayam is a spent force, and so is the case with uncle Shivpal. If Akhilesh does not chicken out of his confrontation with Mulayam Singh, he can set the agenda for Elections 2017. The first phase of the seven-phase poll begins on 11 February and results are due by 11 March. This means he must send his dad packing over the next week so that he has a month to campaign and sew up his alliances.

Akhilesh wins if he gets his father to adorn the Margdarshak Mandal, but if there is a messy political compromise where his detractors are also accommodated, he will be up the creek. If Akhilesh does not win this battle against the first M (Mulayam), he will not find it easy to align with the Congress and Ajit Singh’s Rashtriya Lok Dal (RLD), since he will not have the seats to spare for them. A split SP should be okay for Akhilesh, as the bulk of the Yadav vote will gravitate towards him, with Congress and RLD bringing in the Muslim vote and a chunk of the Jat vote.

The BJP will be hoping that Akhilesh and Mulayam will continue jousting till the end. If that happens, the Muslim vote will be rudderless – a situation ideal for the BJP, and Mayawati, to a lesser extent. This is what gave the BJP huge victories in western UP in 2014, and the same could happen this time too.

As for Mayawati, she has less of a chance this time, because some of her Dalit votes may gravitate towards the BJP, and the Muslim vote is contingent on Akhilesh screwing up his alliance with Congress.

What of the Modi factor, or demonetisation?

The Modi factor will work for the BJP at the margin, and especially if Akhilesh does not get his act together. To win, the BJP should get at least one partner (Ajit Singh) in western UP, and a Muslim split vote in large parts of UP.

To repeat, this time it is Akhilesh’s moves – or failures to make those moves – that will finally get one party over the 202 mark. He should get Mulayam Singh to blink, and get his Mahagathbandhan in place to win.