Four Years Of Modi Government: The Prime Minister And The Media 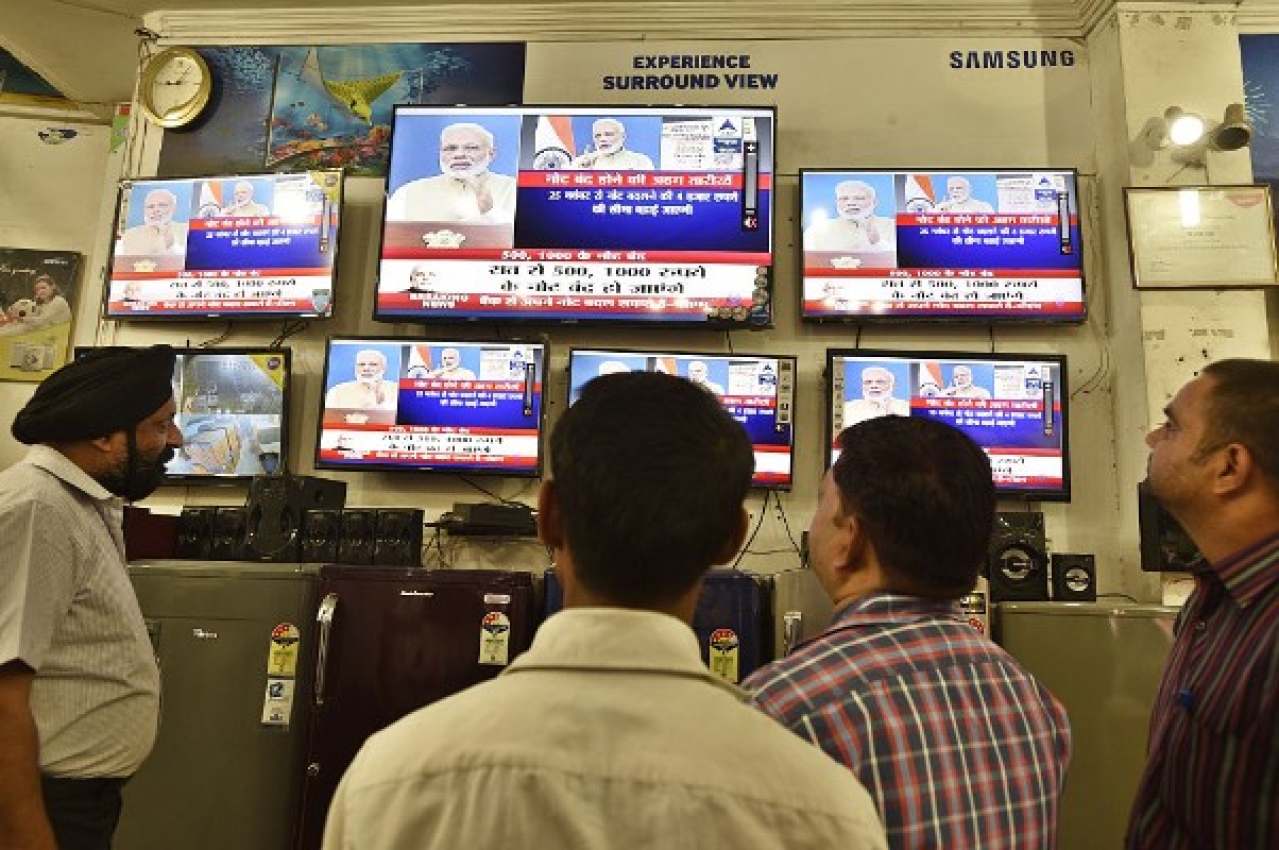 People watching TV during Prime Minister Narendra Modi’s address to the nation on 8 November 2016, when he announced the scrapping of Rs 500 and Rs 1,000 notes. (Sanjeev Verma/Hindustan Times via Getty Images)

Ever since headlines accusing the Gujarat government of complicity in the 2002 riots started appearing in newspapers, I have closely followed the media’s coverage of Narendra Modi. It is fascinating to see how the relationship between Modi and mainstream media has evolved since then. As we approach the fourth anniversary of his first term as prime minister, this is as good a time as any to discuss Modi’s relationship with Indian media.

Narendra Modi, I believe, is a leader for the times we live in. His growth from a chief minister to a prime ministerial candidate and to now one of the most influential leaders in the world, has happily coincided with the advent and rapid growth of social media. Modi was among that early lot of politicians who understood the potential of this medium and used it to dramatic effect, to bypass the traditional media machinery, which always harboured a bias against him, at least before 2014.

Modi’s near-obsessive focus on using new communication technologies (like the hologram during the 2014 campaign) springs from his awareness of his status as an outsider to the power corridors of Delhi. As a charismatic orator with impeccable personal character, Modi is aware of his ability to speak to the masses directly and, over the years, has used various strategies to harness that connect with the masses while keeping the media at bay.

I would like to take a moment to discuss why even today the mainstream media remains largely hostile to Modi. The popular opinion, at least on social media, sees this essentially as a battle between good and evil, an Apollonian versus Dionysian struggle, if you will. While this might have a grain of truth in some cases, I don’t think it sufficiently explains the hostility that the mainstream media has for the Indian Prime Minister.

Gayatri Jayaraman discussed how today’s media organisations, most of whom run losses into hundreds of crores every year, are essentially in the business of access. Simply speaking, they often act as a go-between, connecting businesspersons with powerful politicians whom they need to connect with for their businesses. This is a simple business model that has evolved due to the confluence of various factors, and no single journalist or media house can be held entirely responsible for it.

And that is where media’s real problem with Modi begins. He is essentially like a modern-day Eliot Ness from Brian De Palma’s The Untouchables as far as media’s power politics is concerned. As Swapan Dasgupta summarises it so succinctly here, Modi has always relied on pressure from below (or the power of electorate) to get his way and if his being the outsider to Delhi’s incestuous power corridors was not enough, his complete lack of interest in co-opting media has sealed any possibility of a cordial relationship with them.

So then, what are the hits and misses of his tenure as a prime minister from the prism of media?

To begin with, Modi gets full marks to understand that, stripped of its age-old power equations and of its opinion-making prowess forever destroyed by social media, today’s media is nothing more than a medium of delivery for your message to the common people. Very often, members of the press aspire for a loftier role in politics, but by refusing to engage with them, Modi reduces them to mere carriers of his news. He understands well that the media covering him is not contingent upon him being friendly with them or even interacting with them on a regular basis.

Additionally, unlike United States President Donald Trump, Modi has quickly moved away from the “evil media keeping mass leader down” narrative as soon as he was sworn in as prime minister. At a strategic level, he perhaps understands that there is very little utility in him playing a victim of media persecution. People do not like to see their leaders in perpetual victimhood mode, something that Delhi Chief Minister Arvind Kejriwal has never understood, and so Modi using attacks made on him in the media only sparingly is smart strategy.

Expanding on his theme of considering the media only as a delivery medium, Modi has experimented with some truly innovative ways to engage with the masses in India. With Mann ki Baat, a radio programme that he hosts, he has single-handedly revived interest in and awareness of radio as a powerful and cheap medium to reach people in the hinterland of India. The Prime Minister also must be given credit for touching upon topics of everyday life rather than political hot buttons.

Equally remarkable has been Modi’s decision to pen the book Exam Warriors, directed to students appearing for examinations. This is again, above all, a brilliant communication strategy to reach students in the pre-teen demographic – one that has traditionally never been his party’s forte. The results of these two initiatives can only be determined with time, but the Prime Minister must be given full credit for thinking outside the box to take his communication game up a notch.

One of the more frequent criticisms of Modi’s media strategy that come from sympathetic quarters is on the Prime Minister’s Office not holding daily media briefings. Again, this lacuna, pointed out by senior journalists including Minhaz Merchant, is not without merit. After all, we are among the few democracies of our size who don’t follow this routine, and often holding daily briefings is a good way to set the narrative early rather than jumping later into a reactionary mode. However, with a largely inexperienced team still finding their feet in Delhi, the Prime Minister might have simply decided to minimise interaction with the media to cut down on opportunities to misquote his office and/or for journalists to work their way back into the power corridors. It must be admitted though, that this is at best a defensive strategy, and with the government now entering its final year of the term, it is time to shed the inhibitions and play on the front foot.

Even though not directly a part of Modi’s media management strategy, the Information and Broadcasting Ministry under Smriti Irani has played a largely forgettable role in building the media image of the government. From their ham-handed attempt to regulate the timings of condom advertisements to the ill-thought-out media accreditation cancellation directive, the ministry has often given the feeling of bureaucrats repeatedly letting their charismatic yet somehow naïve boss down. At the time of writing, an announcement handing Rajyawardhan Singh Rathore independent charge of the ministry was made. Let’s hope that Rathore is more sure-footed than Irani was, in his dealings with the media.

Regular interactions of Modi’s core team with supposedly non-friendly television channels and/or newspapers and other media outlets have remained a sore point for many online supporters of the government. Personally, I do not subscribe to this theory of not talking to your “enemies” (or even thinking in terms of friends and enemies in perpetuity) primarily because this exercise eventually creates echo chambers where dissent is automatically taken as disloyalty. Also, if a particular channel is not friendly to your ideology, then chances are, its viewership is similarly inclined. In that case, it would be foolish for a politician to give up an opportunity to address a new crowd that may have a few potential fence-sitters.

Modi’s media strategy rests on his immense popularity and charisma and his acute reading of the media’s strengths and weaknesses. Assuming that he is voted back to power in 2019, I don’t see the media’s generally hostile attitude towards his government changing. However, with their ability to influence electoral narrative reaching new depths every day, I don’t see the Prime Minister losing any sleep over it.

Get Swarajya in your inbox everyday. Subscribe here.
Tags:
793 Shares