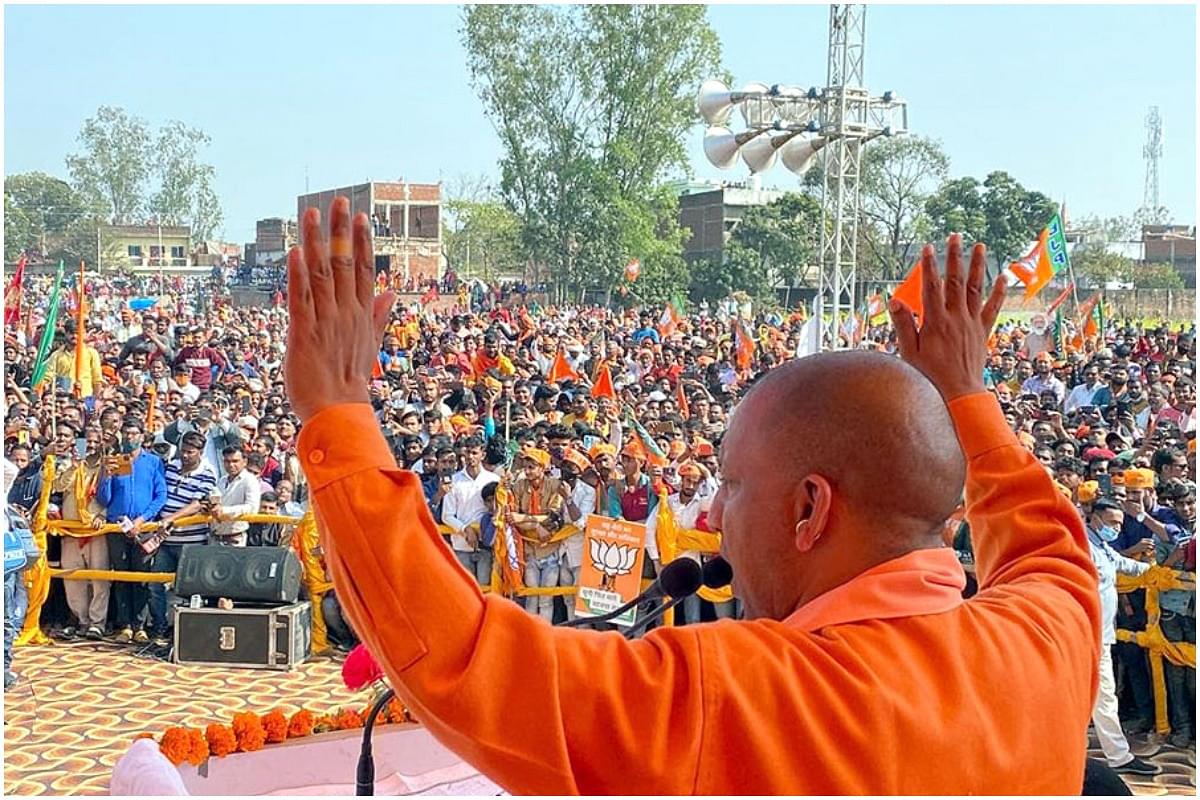 Come March 10, the BJP's theme song for these elections in Uttar Pradesh, `Aayenge toh Yogi hi, could well turn into a reality.

In 2017, BJP had created a history by winning around 80 percent seats UP, in an assembly of 403-members. The vote then was for Prime Minister Narendra Modi, the promises made by him and goods and services delivered on the ground.

Yogi Adityanath was a surprise choice by PM Modi and then BJP president Amit Shah. Five years later, Adityanath has emerged as a strong, mass leader in his own right. This time around a vote for the BJP, or preference for the lotus symbol or the “phool”, as some call it in rural areas, is as much for Yogi, as it has been for Modi.

Going by the popular mood among cross sections of people, social and economic, assessed after travelling to various parts of UP, from western to central (where first five phases of elections have happened), and now to the eastern region where last two phases of elections are to take place, it can be inferred that UP is poised to script another chapter in history.

For the first time since Independence or since 1952, in 70 years, the state seems set to re-elect someone, Yogi Adityanath in this case, as chief minister after him having served a full five years in office.

This will also for the first time since 1985, after 37 years, that a ruling party, the BJP in this case, could return to power in India’s most populous state.

The most revealing part – as this writer travelled to various parts and spoke to people, in urban, suburban and rural areas – is that the strong push for Yogi or BJP’s re-election is not coming from emotive or communal issues. Rather, it is coming out of the performance of five years of Yogi government, its governance and delivery on the ground.

In contrast, those voting in varied social strata for the BJP list the positives which the Yogi Aditynath government has delievered for the state and for the people. Free ration, distributed to all ration holders in the state twice every month in fair and transparent manner (without any discrimination of caste, creed and religion) and improved law and order, what they call `Gundai Khatam’ (goondaism contained) are the primary issues going in favour of Yogi. Such people also add improved road connectivity and other infrastructure projects to their reasons to vote BJP. Improved power supply is also rated highly among the vast majority of people.

Emotive issues like Hindutva, mandir (Ayodhya and Banaras) construction and reconstruction could well be in the psyche or in the subconscious of people voting for the BJP but they are not playing any role overtly. Instead of a frenzy over temple construction in Ayodhya, there is a feeling of satisfaction among cross sections of people, which is working favourably for both the Centre and the state.

Ask people in the central or eastern region about Hindu polarisation or reverse polarisation, and the answer would mostly be in negative – “Na. Wo koi baat hi nahi, panch saal ke kaam pe vote hoga (no that is not an issue, vote will be on basis of five work).

Stray cattle is indeed an issue in all regions, and among all sections of people. But the question is -- will that be an overriding issue that leads to people voting negatively against Yogi? The answer is no.

The poorer sections of people in non-descript hinterlands have this to say – “Modi ke pahle kisi Sarkar ne garib ke liye kuchh nahi kiya tha. Jab se Modi aaye hain, garib ko bahut kuchh mila hai. Ab yahan Yogi bhi garib ko de rahen hain…….Pahle data Baba Modi the, ab Baba Yogi bhi hain….Ghar bhi, paisa bhi, anaz bhi, aur kya denge (before Modi so many governments came and went but never did the poor get anything. Since the time Modi has come to power poor people have got so many things…..first there was Baba Modi, now there is Baba Yogi also…..house, money and ration, what more should one expect). Given such a sentiment, it is not difficult to assess which way the voting would go.

Modi’s goodwill among the people continues to weigh high in the state. But Modi couldn’t be the BJP’s face for the second time for UP assembly elections. What has come as a booster to the BJP’s campaign is that Yogi Adityanath by himself has become a factor, a force multiplier of sorts.

The BJP is holding on to its support base among upper castes, and the non-Yadav OBCs, including the extremely backward castes and sections of Dalits (gained since 2014). Splinters of Mayawati’s core support base, including Jatavas, are also coming the BJP’s way. The Rajput-versus-Brahmin conflict theory, talked about with much passion since last year, is not seen on the ground.

The ruling party faced a tough challenge in the first phase from the SP-RLD alliance or the Gathbandhan. The challenge in the second phase was even tougher. Here the Muslim consolidation was total, and the Jats, broadly speaking, were split in a 70:30 ratio in this region. Yadav consolidation for SP, it goes without saying, has been almost total. But the silver lining for the BJP was that in areas of Jat influence, Yadav presence was negligible and in areas of Yadav influence, Jats were negligible.

Also, Akhilesh Yadav’s five-year regime is remembered by a majority of people for the wrong reasons.

But come the third phase, and the word `Gathbandhan’ vanished in thin air. The BJP started to make good gains, which continued in the fourth and fifth phases. The sixth and seventh phases in eastern UP are set to go with the trends of the latter three phases.

Akhilesh Yadav’s SP ‘s numbers would go up, but the BJP is poised to get more than enough seats for its workers to break into song and dance on drum beats on 10 March, just a week ahead of Holi, when the counting of votes takes place.