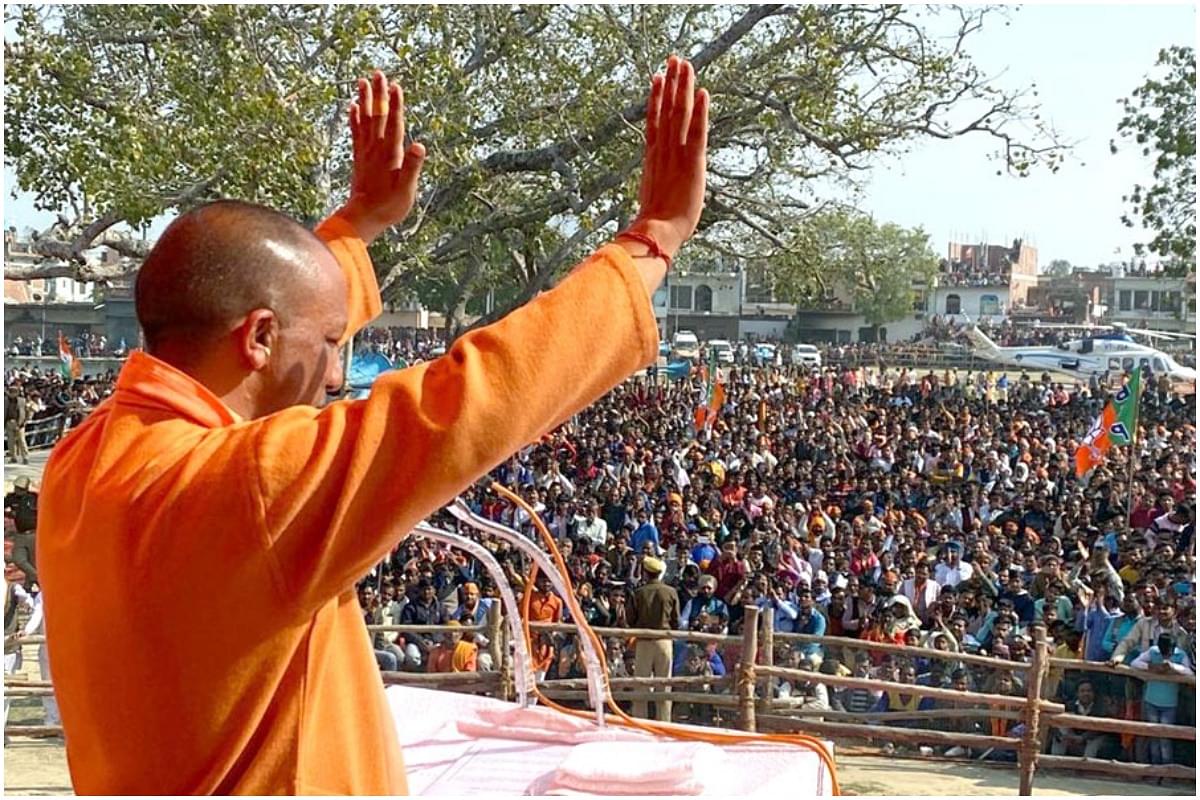 He seemed to be in a great rush, grabbing hot and spicy poori-sabji at a roadside stall near Gondlamau in Sitapur. He (name withheld on request) was in a police uniform. A constable, his gun resting on a dusty table. He was quietly listening to the conversation going around him. After a while, he couldn’t restrain and spoke out.

“Let me tell you something, I am from Mau. Fifteen years ago my unit PAC was sent to Baroda in Gujarat for security during elections. To our surprise, when we used to ask some people ‘who did you vote for?’, they wouldn’t tell the name of the candidate but say `Modi ko' (to Modi). Candidate didn’t matter. Only Modi and the lotus symbol mattered. Same is happening here. Yogi is drawing the same attention and traction. A vote for BJP is a vote in Yogi’s name. While I travel as required by my job, I keep listening to what people talk.” He finished his last bite, picked up his gun and hurriedly walked away.

After traveling to various regions of the state and talking to people of all shades, one finds that the constable from Mau had his observations right.

Five years ago, UP voted overwhelmingly in Modi’s name, giving 312 to BJP, and over 325 in total to the NDA, in an assembly of 403. Prime Minister Narendra Modi and Home Minister Amit Shah made a bold experiment by making a feisty Yogi Adityanath, an MP, and Mahant of Gorakhnath temple, chief minister of India’s most populous and politically most critical state.

Five years down the line, Yogi has meta-morphed into a non-nonsense tough administrator and a mass leader. Amongst the BJP’s vast support base, both traditional and newly acquired (since 2014), he is seen as perfect support to Modi. Those who believe in “Double Engine Government” theory, see Yogi as an engine that acts as a force multiplier for PM Modi and the party.

“When I will go the polling station, I won’t look at the candidate’s name on the left, I will only look for “phool”, the lotus and will press the button. If I look at the BJP candidate here and weigh his candidature on merit, I would in all probability not vote for him. My vote is for Yogi. Yogi has done so much for the state, for the people, he needs a second term in the state” said Mukesh Sharma at Janaura bypass, Faizabad. His wife and daughter would do the same.

Far away in Karanpur in Raebareli, a group of men who said they were all from different baradari (caste) Thakur, Pandit, Nau, Pal, Maurya went on: “Baba Yogi. Do hi naam hai, Pahle Baba Modi ab Baba Yogi…..both are givers. They have given so much, done so much for the poor that no one could ever do. Yogi needs another term, thereafter he is going to write many more chapters in history.”

Such voices are heard in Ghaziabad, Noida, Lucknow, Loni, Baghpat, Shamli, Rampur, Sitapur, Banda, Amethi, Raebareli, Banaras and in many other parts of the state.

All media stories and uninformed gossip mills which were propagating last year that “Yogi was not getting along with Prime Minister Narendra Modi and Home Minister Amit Shah and that some hard decisions were soon to be taken”, have conveniently fallen silent.

Modi and Yogi are seen as a team. Pictures of Modi affectionately putting his hands on Yogi’s shoulder and both of them taking a round of Manduadih Railway station (Varanasi) after midnight has had its desired effect.

Similarly, the stories of ‘Thakur versus Brahmin’ conflict in the Yogi government couldn’t sustain beyond a point.

Five things which are working for Yogi Adityanath, which figures in conversations across the state are –

First, improved law and order; “Goondai Khatam” (criminals contained): On this count, Adityanath is a hero among vast majority of people. His crackdown on likes of Mukhtar Ansari, Atiq Ahmed and Vikas Dube, mafias, local dons and local toughs, encounters included, has placed him in an entirely different league. But for Yogi, police action against Azam Khan was inconceivable to many. “We are free to do business without fear of extortion. We are free to go out on the street even late at night without fear of life”, is the most commonly heard sentiment.

Second, free bi-monthly ration along with edible oil to all ration-card holders: There is no discrimination of caste, creed or religion. The distribution is smooth and transparent. Some even claim that supply is so much that some families now have surplus ration. This takes care of the mahngai or inflation that figures commonly figures in political discourse. This also takes care of what they call ‘chori’ , aloso commonplace in yesteryears.

Three, improved electricity supply: Low and erratic power supply with faulty meter reading and rates, corruption at all stages used to be one of the biggest talking points in state elections till 2017. No longer. Improved power supply is now an achievement for this government.

Fourth, infrastructure development: A travel by road in parts of the state gives a clear impression of improved infrastructure. People of catchment areas of the infra projects judge the Adityanath administration positively on that count.

Fifth, personal integrity or ‘Kiske liye kamayega?’: This is working hugely in favour of Yogi. He is taken as a man of simple needs and taste. A man who doesn’t have a family, like that of rival Mulayam Singh Yadav and his son, to extend patronage for. He is perceived as a hard-working man who couldn’t be accused of indulging in corruption of any kind.