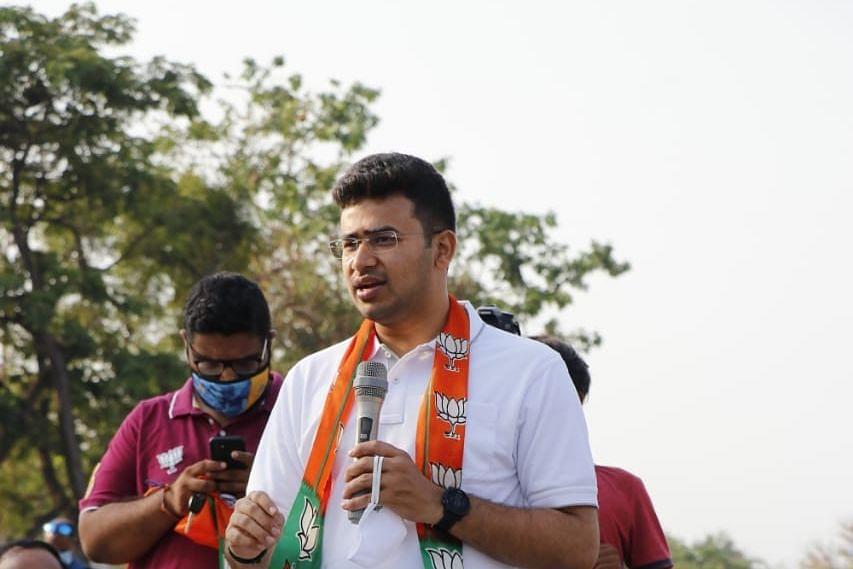 Bengaluru South MP, Tejasvi Surya, was recently on a tour of Coimbatore for the upcoming assembly polls in Tamil Nadu.

He began his campaign along with BJP candidate for Coimbatore South, Vanathi Srinivasan, by taking a walk on the lush green Race Course.

Police and party men seemed to have a tough time handling the youngsters who came in droves so they could take a selfie with him. Some of the elder walkers assumed that it was a movie shoot.

From there the MP took to the famous Annapoorna Hotel for breakfast.

Surya, who was incidentally the first intern of Swarajya, shared his breakfast experience with the magazine thus:

"I went to settle the bill, but the friendly cashier was ready to waive it. However, I insisted on clearing the same by stating that the members of the BJP settle their own bills as we do not belong to the DMK."

Surya had a hectic forenoon thereafter and used his post-lunch hour with Swarajya to discuss the national situation.

We wanted to know about his experiences as a campaigner in the Northeast — specifically Assam.

"The people of the Northeast traditionally felt that Delhi was far away and would not hear their voice. This was the first time that the young voters agreed that they were experiencing governance. The voters at large feel that investments, infrastructure, basic essentials, etc., had received a lot of attention in the last five years"

"They understood that infiltration issues were getting addressed for the first time after the Assam Accord. They understood that their interests were being protected by the Chief Minister, Sarbananda Sonowal and Himanta Biswa Sarma (Health Minister of Assam and BJP's key strategist in the North-East). Therefore, the people of Assam want the incumbent government to win once again," he said.

At this point, he was reminded that he should address a meeting in a while from then. Therefore, he sequenced his answers in quick succession.

"Let me tell you something. The BJP is the party of first choice in Bengal. The people of rural Bengal are direct victims of the cultural and economic onslaught of the illegal immigrants and the local minorities. Their economic resources were being snatched. Even the Durga Puja Pandal was a challenge".

"The rural population include the BC, OBC, SC, and ST communities and they have suffered long enough. The women of Bengal suffered because they did not get Ayushman Bharat and Ujjwala Scheme benefits. Lives had been lost too due to violence".

"The farmers did not get the Kisan Samman Nidhi benefits and the Chief Minister did not allow the Prime Minister's Awas Yojana to take off. Therefore, houses could not be built".

"Mothers lost young sons due to political violence and suffered abandonment. This anger will oust Mamata Banerjee. Leaders like Syama Prasad Mookerjee and Gopal Patha had saved West Bengal for the Hindus and for India. The year 2021 will be remembered as the year when Narendra Modi and Amit Shah saved West Bengal once again. BJP is ready to develop Bengal once again, for it will be a cooperative government and our attitude will not be confrontationist," he said.

Tejasvi turned serious while stating that the story of Kolkata was sad. He stated that the architect of Singapore, Lee Kuan Yew, had once wanted Singapore to be like Calcutta.

The silent and suffering voters of Bengal are ready for, "Chup Chaap Kamal Chaap" stated Surya.

He further added that the Congress party had lost its relevance in the new India of today.

When asked about his observation on Tamil Nadu, he said:

"Tamil Nadu is witnessing a different election, for the doyens, J. Jayalalithaa and M. Karunanidhi are no longer on the scene. I really think Chief Minister Edappadi Palaniswami is continuing to give new direction to state politics".

"There is a stark difference between him and the DMK, for he is a soft-spoken farmer whom they can relate to. His track record with regard to managing political and administrative crises has been good"

"The regular Tamil voter wants the state to cooperate with the Centre and they know that Narendra Modi is going to serve as the Prime Minister for many more years of progressive new India. They do not want Tamil Nadu to suffer like West Bengal due to the confrontational attitude of Mamata Banerjee".

"The cadres of BJP in Tamil Nadu are putting up the most spirited fight ever and are fighting to win the election. The AIADMK will form the next government. The BJP will be entering the Tamil Nadu Assembly and this will be the beginning of the decimation of Periyarvadi politics in Tamil Nadu".

"The future of the BJP is about expanding all over the south. The Opposition leader, Udhayanidhi Stalin, is desperately trying to prove that he is the Rahul Gandhi of Tamil Nadu. I think it is in the nature of dynasts to showcase their arrogance, entitlement and ignorance."

Tejasvi also proposed a partnership between the states of India. He began by proposing that Bengaluru and Coimbatore could be the first to become partner cities.

The young politician represents Bengaluru South and felt that such a partnership would be a distinct possibility during his term.

Tejasvi was sure that BJP and the NR Congress will form a government in Puducherry. He was full of cheer while talking about Kerala and the handing over of temples back to the public.

"We will get a significant number of MLAs in the coastal state. Metroman K. Sreedharan will win the elections and enter the legislature. This will help the BJP serve the state of Kerala better," he felt.

"Freeing Hindu temples is top on the agenda of the Bharatiya Janata Party. Temples had always been the epicentre of culture, spirituality and societal vibrancy. It is extremely unfortunate that they are governed by the state. The government must move out and let the societies manage the temples".

"BJP has always maintained that it wants to free temples from government interference. There could be many models, but the temples will have to be with the people. Now, tell me, which came first, the HR&CE department or the Tanjavur Brihadeeswarar temple? Temple management systems in India are older than the governments that brought in regulations".

"Why should a Christian Chief Minister in Andhra Pradesh take up the management of the Tirupati Balaji temple in Andhra Pradesh? Why should the communists in Kerala or the atheists in Tamil Nadu manage temples? Why cannot they allow people to look after their own Gods?"

"Our temples and our people are interconnected. Pilgrimages and spirituality have created national integration via cultural exchanges. Let us ensure that Hindu society enjoys complete freedom with regard to its places of worship," he felt.