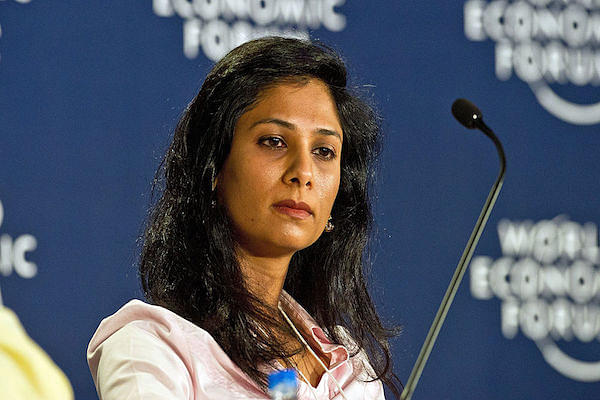 Kerala is in the grip of yet another controversy. This time, the debate is around the appointment of Dr Gita Gopinath as the economic advisor to Chief Minister Pinarayi Vijayan. The post of economic advisor to the CM is an honorary position, without any remuneration.

Dr Gopinath is a permanent professor of Economics at Harvard University. She is the third woman ever and the first Indian after Nobel laureate Dr Amartya Sen to receive this outstanding honour. Despite such excellent credentials, her appointment as economic advisor to the state has drawn flak from different quarters.

What makes Dr Gopinath unfit for the job? The simple answer is that the agitated groups perceive her views on various economic issues as neo-liberal. They reason that her ideas are inconsistent with the prevalent views accepted and practised in the political economy milieu of Kerala.

Dr Gopinath is an outspoken academician enjoying significant academic and intellectual freedom, which is unheard of in this part of the world. On the contrary, Kerala’s higher education realm is notorious for political appointments with scant respect for meritocracy and international standards. Both the Left Democratic Front and United Democratic Front, the two major political fronts in Kerala, have nurtured a stagnant and opinionated governance system over the decades. Coalition politics, as well as caste and communal agendas of the ruling class under the supervision of a paternal state cajoled by a veil of socialism and communism, have deteriorated the quality of intellectual arguments in the state. It has resulted in a situation, where, if you are on one side, you are a great humanist, and if you are on the other side, you are a class enemy.

There is little difference in the political ideologies followed by the ruling and opposition parties. Hence, Dr Gopinath’s appointment is a fact that is hard to digest for both the Communist Party of India (Marxist) and the Congress. Irrespective of their political divide, leaders from different political parties have registered their fulmination on the issue.

In Kerala, those who advocate liberal ideas are considered crony capitalists. It is no wonder that there is a lack of understanding of various schools in economics and political sciences, as their learning itself is designed to supplement the clichés and beliefs that the political vote bank is harping on. It is not an issue of one Gita Gopinath. Instead, it is a reflection of the acceptance and tolerance level prevailing among Kerala’s thought leaders and political masters.

As economic advisor to the state, Dr Gopinath does not run the government for the next five years. Her duty involves advising the CM on various policies and issues related to Kerala’s economy. It is up to the government to decide whether to accept her counsel or not. Democracy guarantees the right to dissent and disagree, but it should not usurp the rightist tone and kill the very spirit of the academic intelligentsia of exchanging ideas and novelty in the area of one’s expertise.

The CM is trying to push for more investment in Kerala; such an unfair reception meted out to an economist of global repute does not give out a positive message to the global community. One should also understand that any policy maker would take up these opportunities with sincere interest and desire to inspire, inform and influence the decision makers, and thus the public, as a whole. As in the case of Dr Gopinath, a majority of them do not work for money but with the sole intention of becoming a change agent for the overall development of the nation. Being in an advisory post, Dr Gopinath’s role and the extent of intervention is very limited, and her prescriptions are not binding in nature. In that case, what disconcerts those who vehemently oppose her appointment?

Kerala has a rich tradition of inviting experts from around the world to advise them on economic policies of the state. Those who oppose Dr Gopinath seem to lack the reading of history from the days of Dr KN Raj. What is presumably hindering the acceptance is the urge to retain the status quo of the role of the paternal state. It is nothing but a reflection of the paradoxical situation that Kerala has been experiencing for the last two decades. The economy of Kerala thrives on remittance money, whereas the state is jubilant to declare that the government could provide every service (public or private) at a lower price. Any suggestion to downsize the government’s role is termed as neo-liberal and not looked through a logical and realistic proposition. The controversy surrounding Dr Gopinath shows the lack of a think tank culture in Kerala. Mostly, such an exercise is blocked and booked by dispirited elements for the same reason, whether the ideas generated are in sync with the status quo or not.

In this globalised world, there are different avenues to seek advice and accept or reject them, as one may prefer. Chief Minister Vijayan, being active on social media, is addressing the global audience on a regular basis. He is accepting suggestions and queries from people across the globe. Dr Gopinath’s role as a financial advisor can be considered as one among them.

The need of the hour is to open our eyes and ears to the various developments in different walks of life rather than boast of our achievements in the 1980s. The world is moving ahead at a tremendous pace, and Kerala cannot afford to be left behind. Innovation, scientific temper and creativity are the light bearers of a progressive society. Let us hope that the discussion around Dr Gopinath will take Kerala society to such a height.

D Dhanuraj is the chairman CPPR.

Deepthi Mary Mathew is a Research Associate in CPPR Centre for Comparative Studies.