Give Ideology A Rest: We’ve A Recession To Fight 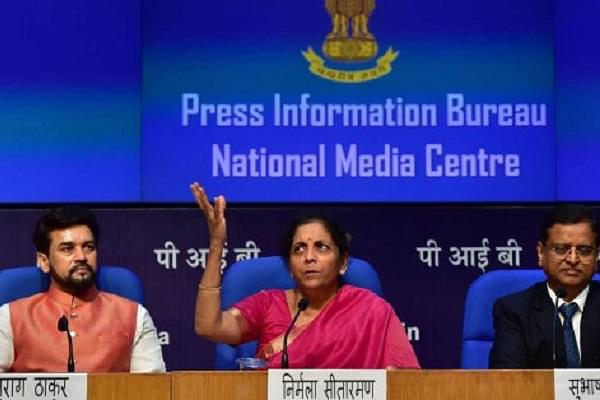 Ideology, as I’ve come to realise, is something that afflicts each and everyone of us. The problem is when ideological considerations take over empirics and rational arguments.

Something similar seems to be happening with respect to the debate regarding fiscal measures to revive certain sectors that have slowed down in India, but this debate is not just about India as we’ve heard too often, that the state must not socialise losses while allowing private profits.

This statement is like a kosher for the ‘right-wing’ and pro-market advocates, but there are instances where fiscal stimulus is provided in order to serve the larger public interest.

During the North Atlantic Financial Crisis (NAFC), one of the mistakes made was to let Lehman Brothers fail as conventional wisdom was against ‘socialising losses’ and what followed was a major crisis that quickly spread over the global financial system.

Indeed, there are concerns of moral hazard every time the government comes in to save private enterprises from going bust, but the guiding rule for any policy maker would be to take action that maximises social welfare.

I am in no ways supporting nationalisation. In fact, I genuinely believe in private capital and free markets with strong institutional frameworks as instruments to maximise social welfare.

However, at a time when thousands of livelihoods are at stake and there are systemic risks of crisis spreading over to other sectors, one must support the decision of the government to intervene in order to preserve the stability of financial markets and the economic system.

In the context of India, we all must realise that private enterprises are profitable (and in operational status) not because of government policies but despite them. Much credit for this goes to past governments that preserved the socialist policies that looked down on private capital and considered profits a bad word.

It was a relief when Prime Minister Modi stated that his government did not consider profits as a ‘bad word’ and he would like the private sector to earn more profits.

Throughout his previous and current term, he has stressed that he will make India a better place to do business and a similar sentiment was echoed by the current and former finance ministers.

At a time when we’ve had some of the worst land and labour policies for decades, it is expecting too much from Indian corporates to compete with the best amongst the world.

This is especially relevant for the automobile sector which has witnessed a slowdown in growth of sales this financial year.

For them to be globally competitive would require reforms in factor markets, a reduction in corporate taxes (in fact an overhaul in direct taxation) and access to low cost credit.

The government has made some progress on labour reforms and the Direct Tax Code report has been recently submitted, which appears to be progressive enough in simplifying our taxation system.

It is extremely unfair to blame private entrepreneurs and label them as ‘inefficient’ when policies since decades have only created obstacles in their path rather than act as enablers of their growth.

As a matter of fact, both the Prime Minister and the Finance Minister have repeatedly highlighted the important role that wealth creators play in India’s growth story.

Moreover, while capitalism and markets do require transfer of resources from those who’re less efficient to those who’re more efficient in terms of usage, one must ask if at present there’s one leading business group in India that is deleveraged enough to take over the assets of another group?

Yes, the old way of doing business required debt to finance major investments with little equity at risk in projects and that has started to change over the last few years, which is a welcome change.

However, we must remember that not all private entrepreneurs are crony capitalists and most of them succeeded despite some of the worst policies – a good reminder of one such policy is the retrospective tax in the Vodafone case.

As far as socialising losses is concerned, nobody wants a nationalisation 2.0 for the automobile sector.

But the fact remains that automobile sector is systematically important for India’s manufacturing growth and, therefore, the government cannot turn a blind eye to the crisis in this sector.

A part of this crisis is because of the direct shift to BS-VI engines which had resulted in consumers delaying their purchases while the rest can be attributed to low availability of credit due to the Non-Banking Financial Company (NBFC) space.

There is no creative destruction happening here which has caused this slowdown, but it is pure uncertainty and, therefore, a policy intervention is warranted.

The government has acted in a very responsible manner in terms of intervening in the sector as it has lifted the ban against purchasing vehicles in order to replace old vehicles and has deferred the revision of one-time registration of fee to June 2020.

These will be instrumental in helping the sector get rid of some of its inventory stuck over its supply chain.

Another possible intervention could be with respect to temporarily reducing GST on all categories of automobiles to mitigate the impact of delayed purchases. However, this intervention would have to come from the GST council.

Over the long term, the government has a strong vision to make India one of the best countries as far as doing business is concerned and this was reflected even in its previous term.

The Finance Minister’s historic presser reaffirms that it will continue undertaking reforms with this idea in mind, especially with respect to factor markets.

The focus should be on reforms that enhance productivity of our economy and this will have a positive impact on our long-term growth rate. As far as ideology is concerned, let’s give it a rest as far as policy making is concerned.