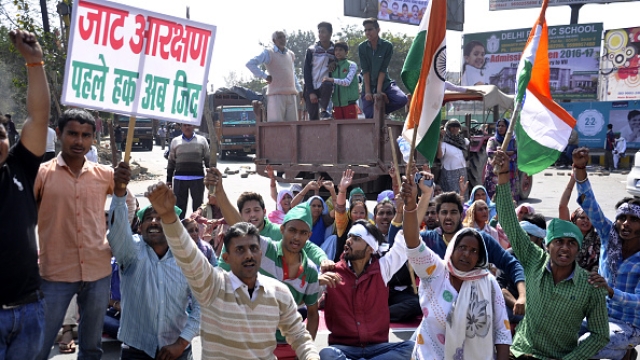 Jats protesting to press for their demands for reservations/Getty Images

The decision of the Gujarat government to provide 10% quota to the Economically Backward Classes (EBC) among the General Category in jobs and education is groundbreaking. Not long ago, the Rajasthan government had also included a provision that reserved 14% quota for EBC in jobs and education. The violent Jat agitation compelled the Haryana government to give reservation to the community under the OBC list by creating a special category.

It was RSS chief Mohan Bhagwat who had stoked a controversy by calling for a review of the existing reservation policy. Naturally, there seems to be a linkage between what Bhagwat espoused and what the three BJP ruled states did with their acts. In doing so, the states ensured that the existing 49.5% reservation for the OBCs and the Dalits was left untouched because any tinkering with this provision would have led to caste wars. But in the process, the upward ceiling of reservation at 50% as mandated by the apex judiciary was breached; it is logical that with BJP in power at the Centre, these state acts would be incorporated under the Schedule Nine to escape judicial scrutiny.

But things may not be easy for the state governments and the Centre to facilitate reservation in excess of 5%. In the case of some southern states the Supreme Court has stated that even matters under Schedule Nine are subject to judicial review. Whatever verdict the apex judiciary delivers it can’t be denied that churning on the vexed reservation issue has started in the country. Economic criteria have been included in the reservation policy, an attempt has been made to move away from the caste-centred focus of reservation and upper castes too can think now of availing the benefits of reservation if they are poor.

The proponents of social justice politics have always maintained that reservation can only be given on the basis of social and educational criteria, not economic status. They have argued for caste as the only determinant factor in deciding for reservation. They further contend that reservation is not for poverty alleviation but representation of the Dalit/OBC groups in the institutions of our democracy. It would be pertinent to have a look into their arguments which they feel are as per the ethos of the Constitution.

Reservation was provided to the Dalits as they constituted a special disadvantaged category on account of the historical atrocities committed against them; it was a democratic obligation to undo the historical wrongs. As long as reservation remained confined to Dalits, there was no objection but once Mandal came in, things turned upside down. Communities that traditionally possessed land assets and had suffered no historical wrongs began to reap the benefits causing heartburn among intermediate and upper castes. If at all reservation was needed, it should have been given to the Most Backward Castes (MBC), most of whom constitute the service/artisan castes rather than the landowning OBC castes.

Once OBC castes got reservation, it led to a clamour among other powerful intermediate castes like Jats, Kapus, Marathas and Patels to have a share in the cake. Moreover, reservation politics of different political parties created the impression that reservation is not about backwardness but about electoral clout of communities, eroding the credibility of the social justice plank. The Constitution did not refer to’ other backward castes’ but to’ other backward classes’ though it’s another matter that our polity understood caste for class.

Social backwardness is not only due to caste but due to a plethora of other factors like education, culture, gender, disability and economy. A hue and cry is raised when any talk of economic criteria in reservation is mentioned but even the Supreme Court has said that caste can’t be the sole reason of backwardness. If economic status was irrelevant as per the Constitution, then how was the concept of creamy layer included in OBC reservation to weed out the prosperous affluent OBC population? It is a reality that today all the OBCs and Dalits have moved ahead and some of them are no longer backward.

Layers have been created within these communities, with only 15 – 20% of their population reaping benefits to the exclusion of others whose conditions have remained as before. These elite sections of Dalits/OBCs are not yet ready to let the benefits trickle down to lower layers. Whenever anyone raises the reservation issue, these sections take umbrage and resort to shrill histrionics. Inclusion of economic criteria will weed out these self seeking groups and create space for other marginalized groups. Economic emancipation is the basic tool of empowerment.

The political class has not tackled this menace effectively as it has looked for solutions only through the prism of identity-driven vote bank politics. No wonder, the RSS Chief has called for the setting up of a non-political committee to review reservation. Not only this, he has laid down the golden rule of this policy, advantage to one should not be at the cost of others. This is what our political leaders need to internalize rather than fighting like tribal chieftains for the honour of their tribes as in ancient societies.

Even in the Mandal verdict, the court has held that lists of OBCs need to be reviewed every now and then to ensure that the better off among them cease to get benefits and make away for newly emerging groups. But the OBC lists and the SC lists have remained permanent. No political party wants to bell the cat for fear of volatile ramifications and loss of their vote bank. If reservation were to be permanent, it would have been included under Fundamental Rights or there would have been a separate chapter of Fundamental Rights of Dalits/OBCs. But our Constitution does not have that.

Coming to the issue of representation. Many feel that reservation has been implemented to ensure the representation of Dalits and OBCS in jobs and education. This is an absurd logic. Social diversity is certainly desirable in Indian bureaucracy but by no stretch of imagination is it a representative bureaucracy. It has got to be neutral and impartial.

Caste wise representation will give a death blow to the steel frame of our country and render it prone to caste manipulations. Similarly, the nation does not need a system of democracy where all benefits provided by the elected government are only for their favoured caste groups.

Positive affirmative action programmes are beneficial in the initial years of their implementation but after a certain stage they breed monopoly of certain advantaged groups until and unless they are modified according to changing times. Social justice politics will fail if it is not taken to its logical conclusion of reaching the poorest of the poor. The upper floors have to be cleared to make way for people standing in queues on the ground floor. The decisions of the Gujarat government and the Rajasthan government have led to vigorous debates in public domain.

Though it is being derided as the Gujarat model of reservation by many opposition leaders, the decision has set the ball in motion. Economic criteria will have to stay and if possible, coupled with the criteria of possession of land assets in any policy that has to do with reservation. After the Mandal reservation of the early nineties, a new axis of reservation may emerge benefitting the poorer upper castes and intermediate castes. Simultaneously, voices may emerge calling for reconfiguration of the Mandal caste list and an addition of a creamy layer concept to the Dalit reservation.

The results of the Social Economic Caste Census 2011 should be brought out in the public domain. The findings will help us in establishing facts about the socio-economic growth of various communities and in ascertaining whether they still need reservation or not. If they have come at par with the general communities, they need to be delisted from benefits. With the passage of time, the quantum and volume of reservation should have come down but just the reverse has happened. This shows some anomalies in policy; it’s high time the nation rectifies the anomaly.